If you think that smartphones are the only ones with protective cases, then think again. Computers have a specialized protective case that is used to protect the internal components of a computer. It keeps the hard drive, motherboard, computer chassis, computer networks, and other computer parts safe and secure. The computer case also makes sure that electrical interference or other objects don’t damage any computer parts.

Of course, computer cases are not only protective shields, and they can also add beauty to the whole computer system. Many cases have sophisticated designs, and they are built with cooling systems, additional slots, and even lights to make your computer visible in a dark environment. In connection to that, two PC cases that you can consider are Corsair’s 465X and 570X. They are popular models that have many features to offer. In this article, let’s find out which of the two works best for you.

Many reviews reveal that both computer cases have excellent cable management. The cables in the Corsair 465X computer case are located behind the motherboard. There is no cable storage, but the cables are already attached to the PC case and cleanly tied down to prevent the cables from tangling with one another. The wiring looks tidy as well and is arranged systematically to ensure that airflow is optimized.

The Corsair 570X also has tidy and organized cable management, but it looks simpler than what 465X has. The cable routing channels are tied with Velcro cable straps that keep the wires to keep them in place. As a whole, the computer case looks neat inside and out. It doesn’t have cable storage, but its cable management is truly commendable.

Aside from that, the computer cases come in different colors. The 465X is available in black and white, and meanwhile, 570X has four colors to choose from: red, black, white, and mirror black.

Another sophisticated optic feature of these computer case models is the RGB lighting, which is integrated into their fans. A Mid-Tower ATX smart case, the Corsair 465X features LL120 RGB lighting fans that are controlled by CORSAIR iCUE software. The lighting fans showcase various effects, including spiral rainbow, rain, visor, arc, and sequential, to name a few.

Corsair 570X is an ATX Mid-Tower computer case with three customizable SP120 RGB LED fans. Unlike 465X’s software-controlled LED fans, 570X comes with an RGB controller to operate the LED lighting. Since you can customize the lights, you have the option to choose the colors you want to have for your LED fans. An important part of a computer case is the fan. It keeps the computer cool, preventing the device from overheating. Corsair 465X and 570X differ in their cooling system, with the former having more fans than the latter.

You can mount a total of nine fans on 465X, but the package only includes three 120mm front fans. In addition to those three fans, you can mount two 140mm fans on the front, two 120mm or one 140mm fan on the top, and one 120mm fan at the rear. If you install all fans together, 465X’s cooling system becomes top-notch.

Meanwhile, the cooling system of 570X isn’t as sophisticated as 465X. It can only accommodate up to six case fans. If you purchase this model, it already includes three front SP120 RGB LED fans, as previously mentioned. It doesn’t have fans mounted on the top and at the rear. So far, the Corsair 465X is leading based on the number of features it offers. But let’s take a look at the prices. Is 570X cheaper than 465X, considering that it doesn’t have so many features?

According to the company website, the price of Corsair 465X is $154.99, while 570X costs $179.99. The computer case that has more features is cheaper than the case with fewer features. If you look at the prices, there is a difference of $25, which is a big amount of money.

Now, we are at the final part of this comparison, and it’s clear that the best choice between 465X and 570X is the Corsair 465X. They may have similar specifications, but 465X has more features to offer. For one, it has more drive bays than 570X, and it’s a smart computer case with software-controlled RGB lighting. Second, 465X has a better cooling system than 570X that boasts of being a larger computer case than 465X and a customizable RGB lighting. Third, 465X is much cheaper than 570X. For those reasons, we recommend the 465X over 570X.

However, choosing between the two computer cases also depends on your preference. If you want a PC case that is less complicated to operate but looks sophisticated, then you can go for the 570X. It’s still an excellent computer case. It may be more expensive, but its features make it a worthy purchase. 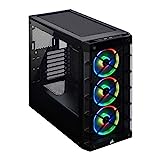 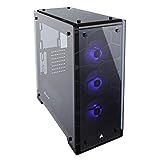