Since 2022 has been filled with numerous Skype conversations and Zoom meetings, the necessity for a high-quality camera has become more prevalent. The mediocre cameras packed with our laptops are no longer enough, particularly if we want to appear as competent as necessary in our regular virtual meetings.

If you’re in the market for a new webcam, you might consider Logitech’s C920 and Brio variants. These devices can supply you with the graphical fidelity you need, as well as much more.

Here’s a back-to-back comparison of C920 versus Brio of Logitech to help you understand which product is ideal for your webcam preferences, considering their installation features, camera and audio performance, functionality, and pricing costs.

Logitech is well-known for producing several of the top webcam mounts in the industry, and indeed the C920 does too. Its clip consists of a two-part plastic arm, and this component can encase the top of the computer monitor or laptop display with a rubberized base that locks the camera securely.

It’s simple to install, and you won’t be worried about it collapsing in the course of a crucial business meeting. The C920 also features a built-in tripod attachment, so you may use it with this if preferred.

Unfortunately, Brio’s clip may not be as sturdy as the C920. Because rather than a dependable plastic, the arm is made out of rubber, and through which it wobbles with even the most delicate movement.

Both C920 and Brio are extremely big and bulky, making them difficult to overlook if installed on any laptop and computer display. The C920 is 3.7 inches wide, whereas the Brio is 4 inches wide.

Even though they’re not remarkably unobtrusive, this is understandable given that they feature high-quality cameras. On the other hand, the Brio has a little more slickness due to its round ends. Compared to an angular shape, the C920 appears slightly bulkier.

Although the Brio’s clip falls short of expectations, Logitech compensates by including a retractable cord. The Brio Package comes with a 4.9-foot cable. However, this can be replaced with any USB Type-C cable you choose.

This is indeed a valuable option, particularly if your computer isn’t compatible using the provided cable. Moreover, the cable of the C920 isn’t removable, and it is 6 feet in length, which is much more than plenty to handle.

Lastly, given that Logitech is one of the top-notch brands for webcams. Both the Brio and C920 are plug-and-play with no need to install software to enable their main function. But, you may need software to fully tweak its functionality to the best possible level. Plus, these devices are readily compatible with most Windows devices. 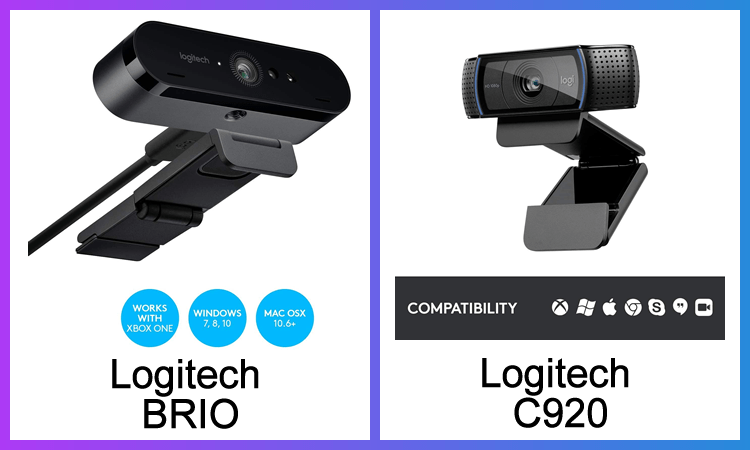 Once putting both devices — C920 or the Brio to a test, users can be satisfied enough. You won’t be thrilled to return to use your laptop’s shaky camera.

You might rely on either of these versions to capture stunning photographs for you, images that seem to be sharp, clear, and tone accurate. But when it comes to the overall video quality, C920 and Brio still have some contrasting differences.

For starters, the Brio features a 90-degree lens, which really is way greater compared to the C920’s 78-degree range of vision. It is a suitable choice if you really want to view more of your backdrop or when you have companions and would like to fit everyone into the screen with you.

In addition, the Brio is loaded with a RealLight 3 HDR technology. This enables it to adjust to any setting, be it a natural-light-filled room or one lighted by fluorescent lamps.

Another edge of Logitech Brio over Logitech C920 is its 4K resolution, which isn’t really helpful since the number of applications and services that support this quality is still quite limited.

But, it’s a good quality feature if you would like to record under this resolution. The C920, on the other hand, can outperform the Brio in low-light situations. 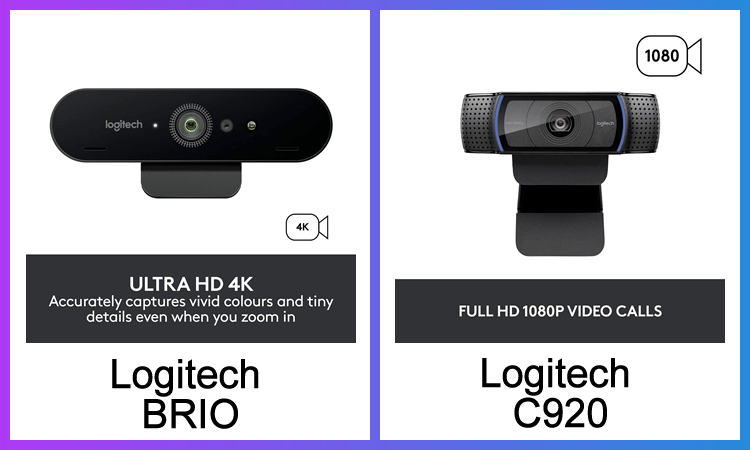 But when it pertains to sound quality, the C920 and the Brio are trustworthy, despite the latter having a little advantage. The Brio, which is equipped with two omnidirectional microphones, may provide higher-quality audio. And when you’re in a noisy environment, your voice will be audible and distinct.

The C920 may be used via Logitech’s Webcam Features of Windows, but as the OS brand suggests, it is not compatible with certain other operating systems. Using this program, you could zoom in and out and pan left and right with the Logitech C920.

Such activities are essential for individuals who shift around frequently and really need to reposition the cameras often. When you’re concerned about items on your workstation disappearing, you can use the application’s motion detection feature to transform your C920 into something like a security camera. Avatars and backdrops are among the other capabilities available through the program.

The Brio, on the other hand, is interoperable with the Logitech Camera Settings software. This software allows users to make several customizations to the web camera. Users can adjust the brightness, color depth, contrast adjustment, zooming in and out, and panning from left to right.

Perhaps your house or workplace is in shambles, and you don’t want to see too much of the backdrop. You can reduce the line of sight from 90 degrees down to 78 degrees, or even to 65 degrees, using the app. Even though this functionality isn’t featured in the app, you may blur out the backdrop or alter it entirely. You must install a different driver for that, though.

Both webcams have the option of attaching a tripod. Unfortunately, this is not included in each box — only the Brio package has it. But this usability plus is helpful. Once the camera cannot be directly tied to the display computer or laptop, a tripod is indeed an option. Plus, a tripod is also useful for live streaming.

Some cameras include a built-in cover bezel. But,

Logitech Brio has this special feature, and such a feature is not available with the Logitech C920. The bezel not only covers the lens but also safeguards your privacy.

The rest of the time, this cover bezel is pitched in the market for privacy purposes. Some Logitech webcams offer extra lens-covering alternatives but not with the C920, in this review only with the Brio. 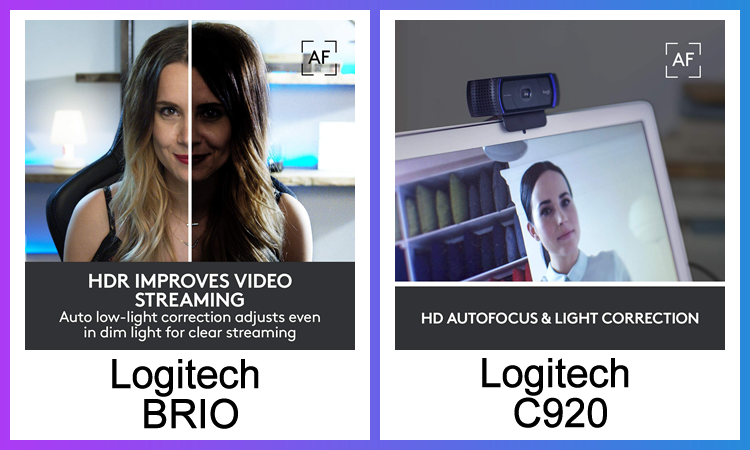 If you’re dissatisfied with the efficiency of your present webcam, the C920 is the solution you’ve been seeking for. You’ll appear excellent during your online meetings since the C920 can generate crisp photos and videos even when the lighting in your environment isn’t optimal, as it outperforms the Brio.

And, it has a reasonably strong clip, so you can be confident that it will stay latched on even if you wiggle a bit. It may not have the most spectacular microphone, but it’s fairly understandable given that this is on the lower end of the price range.

However, if you want to get the sharpest video stream in your Zoom conversation and are splurge-ready to spend extra money, then the Logitech Brio is the camera for you. This device has a broad 90-degree field of vision with RealLight 3 featuring HDR technology, rendering very stunning in levels of image and video quality.

Plus, it has a 4K resolution, though this capability is difficult to enjoy since there’s a deficiency of apps that support it. Nevertheless, Brio notably excels in terms of sound quality, with two omnidirectional microphones, which make you sound as distinct as a professional you ought to be.

The only disadvantage of the Brio is, its arm clip is not as robust as the C920. This may wobble a little during the slightest movements.