Having a great quality headset will surely change your entire gaming experience. Whether you are an amateur player or a professional one, headsets are the ones that will make the whole experience more exciting and intense. In addition, good audio quality can provide clear interactions with other players allowing you to fully immerse into the virtual arena.

Sounds coming from our devices are as important as any gaming features we need, like graphics or screens and game controls. However, there are several tech companies that have produced headsets with different styles and features, making it difficult to choose the kind of headset fitted for you. One of those top-tier tech companies is Logitech.

Logitech has released multiple gaming headsets, including the popular ones, which are – Logitech G332 and G432. These two types of headsets are known for their enhanced immersive sound experiences, bringing you a more thrilling play. However, these two models have unique special features, although they were produced by one company.

So, how do these two models differ? To answer your question and before buying anything, you need to read this article first. Here, we will tackle everything you need to know about these two Logitech headsets, including their: connectivity, sound quality, microphone, comfort, controls, and the most interesting, the price.

The Logitech G432 and G332 are likely the same in terms of connectivity, microphone, and sound quality. Although not completely similar because headset G432 specializes in giving a surround sound output while G332 produces more of a stereo sound output. Furthermore, Logitech G432 can be connected to a PC through 3.5 MM input or USB DAC while G332 cannot.

Logitech G332 and G432 both have a 3.5 MM male connector and a cable length of 6.5 ft or 2 meters. Their cables are not detachable, and so they can’t be used wirelessly. However, a software connection is not necessary. They can be simply connected and used by plugging the male connector into the computer.

The only difference between these two in terms of connectivity is that Logitech G432 can be used on recent versions of Mac and Windows. But this will require internet access for a special software installation through G HUB software.

In terms of Sound Quality, the two models are likely the same. Their frequency range is between 20Hz (lowest) to 20000Hz (highest. Meaning, Logitech G332, and Logitech G432 can produce a strong bass and a clear treble. The accuracy of their sound in bass, mid, and peak is what most gamers demand and seek in the sound frequency wave of their headsets. However, their impedance (39 Ohms), which is the device’s ability to resist electrical current, is only a step close to what most gamers want (25 Ohms – 37.5 Ohms).

Nevertheless, Logitech G332 and G432 tick off the good sound qualities of a gaming headset. They are both reliable and have to surround sound, given that their sound pressure level is 107dB/mW, which is a high supply of audio sources. The only downside is that both models do not have a noise-canceling feature or a passive noise reduction. Logitech G332 and G432 have the same type of microphone, which is boom type. These two are considered flexible mics because users can arrange their position whether on the higher or lower part of their mouths, but both mics are not removable.

Both microphones of the two models have the same frequency range and cord size, which is 100 Hz to 20KHz and; 6mm. And one of their best features is that both models have a cardioid microphone pickup pattern. This means that the mics are unidirectional, and they are sensitive enough to only detect the incoming voice directly in front of the boom mic. It is a great feature because the microphone is highly sensitive, and any unnecessary noise will hardly pass through; however, wind noise reduction is not included. On this part, the two Logitech gamer headset models will differ a little. They both weigh 280 grams and are primarily made out of plastic, metal, and leather. However, the whole design and material of the headset will change everything because these two features speak about your comfort when using either of the two headsets.

Starting with Logitech G332, this model is made out of leatherette rotating ear pads. This is a cool feature because it gives the user a choice to rotate the ear cups up to 90 degrees to ease too much pressure on the ears. In addition, the headset’s cord is tangle-free, which is another plus point because no cord hassles will occur when using it. The ear cup material is leatherette to enhance the comfort of long gaming sessions. The headset also has a soft red pad which makes the user more comfortable when wearing it. Moreover, the headsets are super lightweight.

On the other hand, Logitech G432 is made of plastic with a single strip of metal which makes the headset lightweight. Besides, the metal creates adequate tension around the headset. Its ear pads are also made of leatherette to cover and protect the foam. The ear cups are rotational as well, which gives an option for the user and brings comfort all through the gaming sessions. A great feature of G432 is when you dial back the left side of the headset and flip the microphone vertically, the mic will instantly mute.

Controls of Logitech G332 are very simple to use! On the two sides of the band, you can adjust the wideness of the headset. The microphone is on the left side, which is also adjustable to which position you would like it to be. The volume controls are on the lower right backside of the headset. And the easy, convenient feature is when you flip the microphone up vertically, the mic will turn off right away.

For Logitech G432, there are two control features; the hardware controls and the software controls. For the hardware part, it is most likely the same as the G332. The only difference is that G432 has a USB audio adapter that comes with the package. It is a special feature that can be used for PCs that do not have female connectors. While the software part, the Logitech G432 has a “Changing Headset Settings” (included on the manual) on your device/computer where you can regulate the tune in Acoustics and the volume of SurroundSound, and you may also custom the Equalizer for a better quality of listening.

Get the brand new Logitech G332 Stereo Gaming Headset on sale at $39.99. The original price is $59.99. On the other hand, Logitech G432 7.1 Surround Sound Wired Headset is only $49.99 on sale (the original price is $79.99). Both headsets are available for delivery with no shipping fee! And on the plus note, both items have a 2-year warranty upon purchase!

In conclusion, Logitech G432 and G332 are likely the same in terms of connectivity, microphone, and sound quality. Although not completely similar because headset G432 specializes in giving a surround sound output while G332 produces more of a stereo sound output. Furthermore, Logitech G432 can be connected to a PC through 3.5 MM input or USB DAC while G332 cannot. Nonetheless, both models have a multi-platform to be connected with, such as PCs, mobile phones, and gaming devices like PlayStation and Xbox.

If you are considering purchasing between the two Logitech headset models, do not forget to note all the features and see what suits you best. For example, if your computer doesn’t have a 3.5 mm input, the appropriate choice would be Logitech G432. In terms of Sound Output, Logitech G332 is the better headset if you enjoy a cinematic gaming experience, while Logitech G432 is the ideal headset for achieving the 3d soundscape effect. 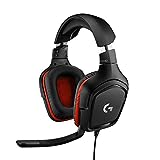 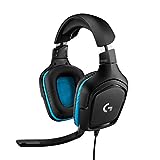