A computer case protects your computer from outside damage-causing elements. It is also one of the ways to bring out the beauty of your computer setup. It is a visible feature, one that people can see in an instant. Aside from that, your choice of a computer case can elevate the performance of your computer since it is built with well-organized wiring and a cooling system. Other computer cases even have tempered glass that lets you see the internal components and RGB lighting for that cool lighting effect.

But if you want to do away with complicated cases and settle for a simple, laid-back but sleek computer case, you have two great options to consider. One is the NZXT H210, and the other is the NZXT H510. Their technical specifications make them stand out, and you can purchase them at budget-friendly prices. But to help you decide which of the two computer cases is your top choice, we will compare them in terms of compatibility, cable management, optics, and price. Both H210 and H510 have built-in cable management. They come with straps for easy and intuitive wiring inside the case, as well as a cable routing kit equipped with pre-installed channels. However, they differ in storage size. The cable management of H210 is 0.64 inches, while H510’s cable management is 0.91 inches. If you check the backside of H210, you can find cable slots that you can utilize for easy cable management. You can take pride in your computer build with these cases that come with a seamless tempered glass panel on the side. You can easily install and uninstall the panel with a single screw. The window is also clear, giving you a clear look at the internal components you have installed and arranged.

As we have previously mentioned, H210 and H510 have a clean yet sleek design. With their simplicity, they are not integrated with RGB lights. There is no built-in lighting either. This is also one of the reasons why H210 and H510 don’t cost as much as the computer cases built with RGB or any type of lighting. Both computer cases have two cooling methods: air and water. For the air cooling method, H210 and H510 already come with two Aer F120mm fans in case versions – one on the top and one at the rear. The fans provide unobstructed internal airflow, keeping the computer cool and functional. They have a speed of 200RPM and airflow of 50.42 CFM. You don’t have to worry about their noise because they can only produce sounds at 28 dBA. Removable filters are also installed on the front panel of the case and PSU intakes.

As an additional feature, these computer cases include a removable bracket designed for the front radiator. The bracket will help you simplify the installation of a closed-loop or a customized water cooling system.

NZXT H210 and HZXT H510 are relatively cheaper compared to other high-end computer cases. Many of the expensive PC cases boast more sophisticated features like smart RGB lighting and software compatibility. But it doesn’t mean that H210 and H510 are not great choices. They actually are excellent options, especially if you are on a low budget but still want a high-quality computer case.

We have finally come to the final part of this comparison. But before declaring the winner, we need to point out that H210 and H510 are technically almost similar to each other. They are made of the same materials (tempered glass and steel) and have the same cable management space and optic features. They even have the same cooling features. If you’re a gamer, either of the computer cases is worth the price.

The significant differences between the two are in the physical measurements and the quantity of some computer components. In terms of size, the H510 is larger than H210, which provides more space for wiring and cable management. H510 supports all motherboard sizes, unlike H210 that is compatible with only one size. With this, we can say that NZXT H510 is the best choice. Aside from that, it’s cheaper than H210. 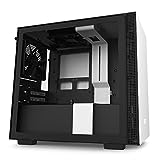 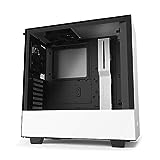