NZXT has been around as long as everyone else in the AiO game. They’ve developed a number of coolers with varying degrees of efficiency over the years. Still, they’ve always used Asetek technology and always with a bit of twist to provide that unique NZXT flavor. Year after year, we are rewarded with unusual, well-informed components from the Los Angeles-based firm, which is always the trailblazer rather than the follower.

The Kraken X52 and X53 will, at the very least, turn attention by taking color and illumination to the next level. Follow us as we examine the performance to see if it matches the aesthetics.

The NZXT Kraken X52 and the NZXT Kraken X53 are almost identical. The X53 is basically the newer version of the X52 with a slightly different design. The X52, on the other hand, is no longer in production.

The Kraken X52 All-in-One Liquid CPU Cooler is a closed-loop liquid cooling system for Intel and AMD CPUs that includes RGB lighting and effects. By adding a bracket, the Kraken X52 is compatible with AM4 sockets.

Connect the pump to the appropriate mounting hardware for your CPU. After that, place the radiator in the desired spot. You may install it as an intake or an exhaust device and even alter the speed to your needs, depending on the necessary airflow within the chassis.

The Kraken X53’s mounting method, similar to that of the Kraken Z53, makes installation a breeze. The pump doesn’t require a screwdriver to install, and the only time you’ll need one is to connect the fans to the radiator and the radiator to the case.

The Aer P radiator fans in the NZXT Kraken X53 liquid cooling system are built with a chamfered intake and fluid dynamic bearing to offer excellent and near quiet operation. The AER RGB 2 120 millimeter fans were utilized in this product. You will receive two fans with this purchase. Its measurements are 120 x 120 millimeters and 26 millimeters. 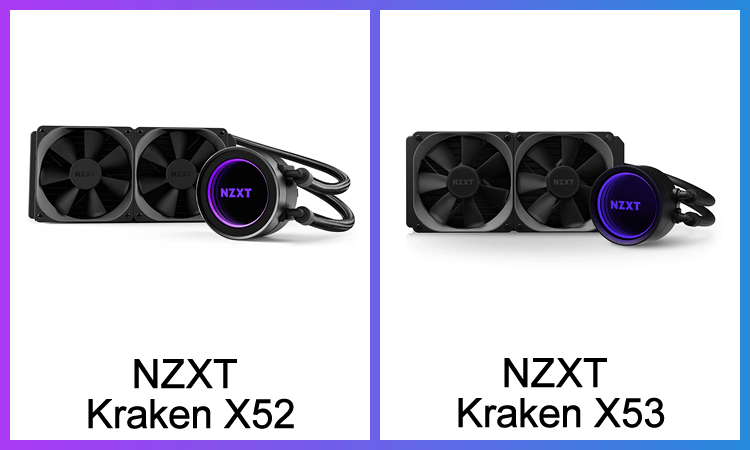 The name of the cooler and the fact that it is a 240mm liquid cooler are prominently displayed on the front of the Kraken X52 from NZXT’s packaging. The remaining area is utilized to display the fans, radiator, tubing, and LED lighted head unit that is housed within this box.

The remainder of the head unit is circular, divided into two parts, and finished in a brushed black to give it a high-end look and feel. The input and outlet tubes are linked to swivel fittings on the head unit to the right of the NZXT logo. The nylon braid and rubber hose are kept in place using a dense, flexible plastic composite substance once they’ve been placed.

Two key connections are located on the side of the head unit, above the NZXT brand under the tinted cover. The fans are powered and controlled by the 9-pin connector, while the Mini-USB port is utilized for CAM control of the complete equipment.

The unit has dual Aer P120 fans. The fans have seven black blades, there are rubber sleeves on the screw holes, and the fans’ 4-pin connectors are at the end of a cable with sleeves.

So, right out the gate, the Kraken X53 is packaged in NZXT’s distinctive white and purple. All of the important information, such as specs and socket compatibility, is listed on the box to assist you if you’re looking for an AIO liquid cooler but aren’t sure which one to choose.

NZXT includes everything you’ll need to get the Kraken X53 up and running. There’s the radiator and pump, for starters. Thermal paste is already placed, so you won’t have to look for it. There are also two Aer RGB 2 120mm fans, a pair of wires, screws, and washers included.

The CAM program lets the user adjust the fan and pump control modes, as well as customize the RGB LED display in the head unit.

The Kraken X52 noise levels are the same as the X52. Since they are both NZXT products, there isn’t much difference in power output and noise levels.

The NZXT Kraken X52 is powered by 12V and consumes 13.5W of electricity to operate. It is quite similar to the Kraken X53 in power consumption, same as their nose levels.

The Kraken X53’s cold plate is connected to the pump. This makes it simpler for water to flow and gives the tubbing more room. Its engine rotates at a pace of 800 to 2,800 times per minute, plus 300 times per minute. It only requires 12VDC and 0.3A of power, which is quite low for a CPU cooler.

The price for the NZXT Kraken X52 on Amazon currently is only $145.00. Considering the performance it has, the price is a bargain.

On the other hand, the NZXT Kraken X53 on Amazon is a little cheaper than its X52 counterpart. For only $139.99, you can get this great piece of hardware for your PC build.

The NZXT Kraken X52 and X53 RGB CPU Coolers have great aesthetic effects, silent operation, and performance-boosting capabilities. These enable your computer to run at a higher level and improve gaming performance, among other things. All of the parameters may be reconfigured and fine-tuned to your heart’s delight using the CAM program. As a result, we can confidently suggest these products to anybody searching for a quality cooler.

There is no clear winner since both products are basically the same. 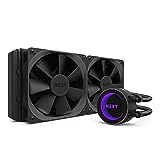