PC builds have come a long way; people have tried many things to spice up their game, from beefy monitors to out-of-this-world cooling solutions. One of the hottest additions in this hobby is liquid CPU coolers which are a must-have these days if you’re aiming for a high-end CPU and GPU combo. Stock air coolers might still be a thing, but they’re not recommended anymore as the cooling they provide is lacking and aren’t reliable.

In today’s comparison, we look at two premier liquid cooling solutions from renowned brands, NZXT and Corsair. We’re pitting NZXT Kraken X53 and Corsair H100i against each other to see the best-valued product in terms of their performance, features, and overall effectiveness as a liquid cooler.

If you’re still not in the hype train of liquid cooling products, then you’re not doing it right. If you’re new to this or you’re considering modifying your build, this article might be of help.

The NZXT Kraken X53 and the Corsair H100i are almost identical in terms of cooling performance, dimensions and compatibility. The biggest difference is probably that the X53 consumes less power. Also, the X53 is a bit more expensive than Corsair’s H100i.

Before buying any of these products, it is thoroughly suggested that you know your PC’s dimensions first so that you will not resort to returning the product you purchased because it’s incompatible. Both products are sculpted with some instances and CPU sockets in mind, and in this section, we will try to give you all that information.

For the NZXT Kraken X53, it’s easy to know what CPUs are capable of this product conveniently stated on their website.

It is essential to note that this product doesn’t include any threadripper bracket, so keep that in mind if you have that particular CPU.

The Corsair H100i also has the same information available on their website.

The NZXT Kraken X53 isn’t entirely made for a specific size. Instead, it’s catered towards newer PC case models, specifically those manufactured by NZXT. The Corsair H100i, on the other hand, is a more comfortable pickup for PC users that has a case that supports a 240mm radiator that is top-mounted.

Most computer products are sold with manuals and installation guides in them. You can expect to get one of these on any of the products that we feature. The NZXT Kraken X53 specifically has several “installation” accessories included that will aid the buyer with the setup.

The Corsair H100i comes with a quick start guide that will have enough details to help even beginners in the industry. Make sure that you stick with these guides, as they will be the sole reason for a successful mounting of your liquid cooling. In case you’re having troubles with compatibility or simply facing a struggle with installing and mounting, their websites are always available for resources or even customer support.

CPUs generate a lot of heat by simply just functioning. Older models generally produce lower heat, but as CPU manufacturers increase the CPU power of their releases, more cooling solution is needed. Liquid CPU coolers should have a lot of cooling capacity to avoid any chances of overheating and system failure.

NZXT Kraken X53 and Corsair H100i have the same number of fans and are also almost the same when it comes to their dimensions. Knowing that they have an equal number of fans, it will be harder to determine who wins in terms of performance. We need to get more details to have a fair and accurate conclusion.

NZXT Kraken X53 and Corsair H100i both have two fans installed into them.

Both products have an identical fan size of 120mm. 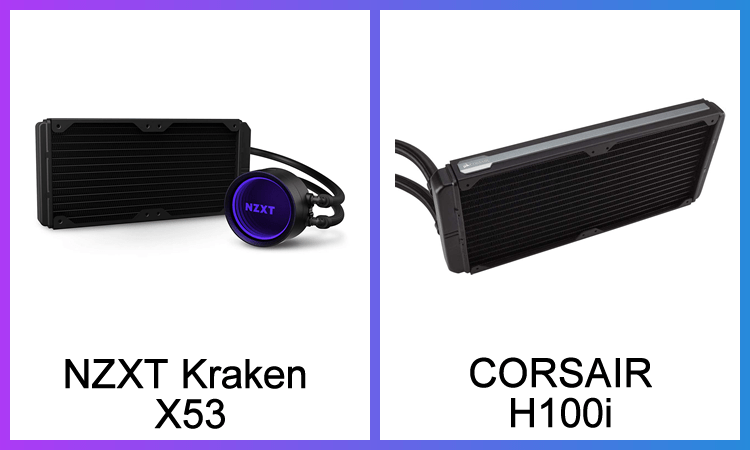 One can argue that the RGB phase may already expire, but we can quickly look at recent emerging products that the RGB lighting is still at its peak. A lot of gamers and enthusiasts favor this variation rather than minimalism. Thus, it is a significant factor for us to look at when it comes to looks.

Both products have LED capabilities that make them perfect for dark rooms as their illumination can provide ambient silent light.

NZXT Kraken X53 and Corsair H100i sport the same matte black color and are the only available variant for both models. There are no apparent differences in colors aside from the pump head.

Compared to newer releases, no LCD functionality displays the temperature on both models.

Modifying these products’ lighting and appearance can only be done using their respective applications. For the NZXT Kraken X53, you need to download the NZXT Cam, and the Corsair H100i requires the Corsair Link.

Both products boast an impressive noise level that is essential for sensitive people when it comes to loud humming and persistent sounds. The NZXT Kraken X53 has a noise level of 21 – 36 dBA, while the Corsair H100i can reach up to 37.68 dBA.

These products already have similar looks, but they also share the same price range. The NZXT Kraken X53 is priced at $134.99, while the Corsair H100i is valued at $89.99 because it’s on sale. In the case of the latter product, it is maybe on sale, or it is a markdown condition. In any case, you could get the Corsair H100i for a meager price on their official website, but its pricing could quickly go up to $100 – $120, so we can safely say that both are valued in the same price range.

When it comes to performance, features, and manufacturer reputation, the NZXT Kraken X53 is the sure winner in this face-off.

The NZXT Kraken X53, however, is our pick because of its low power consumption, which is almost half of the Corsair H100i. It might be more expensive, but this investment is the best option in the long run. Not to mention that it is also compatible with different types of PC cases, almost as if it’s a one size fits all product.