What do you think makes the best and the most worthwhile gaming mouse to purchase in the market today? Do you take the quality of the product into account, or does the price of the mouse influence you more?

This article will feature two of Razer’s gaming mouse releases- the Razer Basilisk V2 Gaming Mouse and the Razer Mamba Wireless Gaming Mouse- and give you a detailed comparison of these two products.

Let’s focus on several differences between these two products to find out which of these two you would prefer when shopping for a gaming mouse right now.

One huge difference that anyone can recognize between these two products is their connectivity features.

Razer Mamba connects to your device via a wireless USB receiver, while the Basilisk V2 connects using its non-detachable 7-feet long USB cable.

However, in terms of wireless versatility, Razer Mamba does not have a Bluetooth connectivity function. What it does have is a 6.9-feet long detachable USB cable that charges your mouse in case of low battery.

Speaking of battery, the Razer Mamba boasts a long 50-hour usage time for your robust hours of gaming sessions at 100% battery life, depending on use.

Mamba also features an Auto-Off Switch when the mouse is left idle in a given amount of time, which is useful for saving the mouse’s battery power.

If used with the mouse’s dedicated software, the Razer Synapse 3, you will be able to tell your mouse’s battery percentage and save power with its Wireless Power Saving settings.

In terms of both of their cables, Basilisk V2’s paracord-like cable allows no drag for your mouse when gaming and is far more comfortable to use than Mamba’s stiff and outdated detachable USB cable.

Both products have an excellent range in terms of DPI, and their cursor movement works smoothly when used during gaming sessions, thanks to their 1000 Hz max polling rate.

Both the Mamba and the Basilisk V2 drop the lowest at 400 DPI and can be adjusted using the Razer Synapse 3 software on your devices.

Their minimum lift-off distance is pretty excellent, with Basilisk V2 at 1.2mm minimum while Mamba at 2.4mm, reducing the likelihood of unnecessary cursor movements while gaming.

In the case of their sensors, Razer applies different optical sensors for both the Basilisk V2 and the Razer Mamba, resulting in varying DPI and IPS support and tracking experiences for both products.

While the Razer Mamba uses the Razer 5G Optical Sensors that caps at 16,000 DPI and 450 inches-per-second (IPS), it integrates such sensors with accurate efficiency.

However, the Basilisk V2 stands out with its Focus+ Optical Sensors that can go up to 20,000 DPI at 650 IPS and, shockingly, can avoid misclicks fairly well.

In terms of click latency, the Mamba stands out with its responsiveness and low latency. With the wireless function of the device, the latency score is 8 ms better than the wired Basilisk V2 and is only 3ms worse when connected via cable. 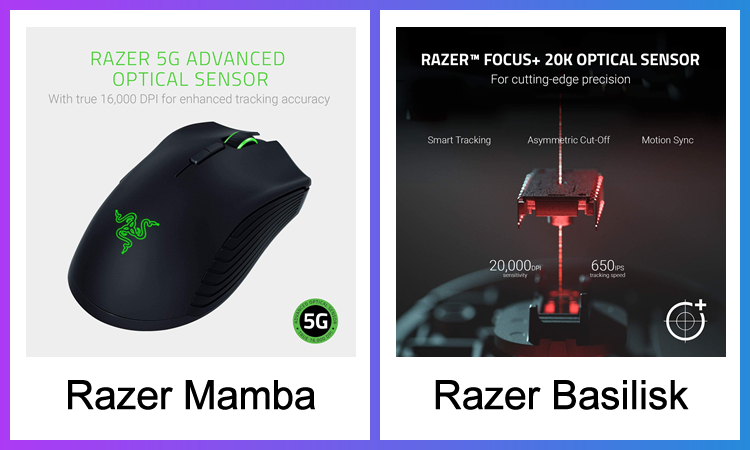 Design-wise, both the Basilisk V2 and Mamba sport a heavy, all-black look except for the little RGB slivers on their scroll wheels.

Basilisk also comes with more buttons than Mamba, although both include a DPI adjustment button and profile switching buttons in their builds.

For grip versatility, Basilisk V2 remains to be a better product than Mamba, as the product caters to different kinds of grip for most hand sizes.

Generally, both products are not designed to be used for fingertip grip, but most people, save for those with extra-large hands, would have a hard time using Mamba while gripping this way.

Both products also do not cater to left-handed users, especially the Basilisk V2, as it incorporates a thumb rest only on the left side of the mouse.

In terms of weight, both products are relatively heavier than most gaming mice in the market right now.

However, the maximum weight of the Mamba with wire makes it considerably heavier than the Basilisk V2 because of its rigidity.

If you want to have a good gliding feature on your gaming mouse, then both products got you covered with their PTFE feet.

Basilisk V2, however, once again shows its quality over the Mamba with its use of Virgin Grade PTFE, making it glide better than that of the normal PTFE feet that the latter uses.

Where the Mamba stands out over the Basilisk V2 is in its portability, which is often the case that you can make for all wireless over wired mouse products. It even has a compartment inside the body for your wire and receiver to fit inside for more convenient storage.

Both the Basilisk V2 and the Razer Mamba can be customized with the help of the Razer Synapse 3, which is available to only Windows OS devices at the moment.

The Razer Synapse 3 features multiple settings to optimize the user’s experience to their preferences.

As said earlier, you can adjust both the DPI and the polling rate of your device via the program. You can also turn the RGB lighting off using the software using this program and program inputs on the extra keys of your mouse if you deem it necessary.

You can also check Mamba’s battery life with this software. Plus, the software includes On-Board Memory, which helps save your preferences to your devices when using it on other PCs. 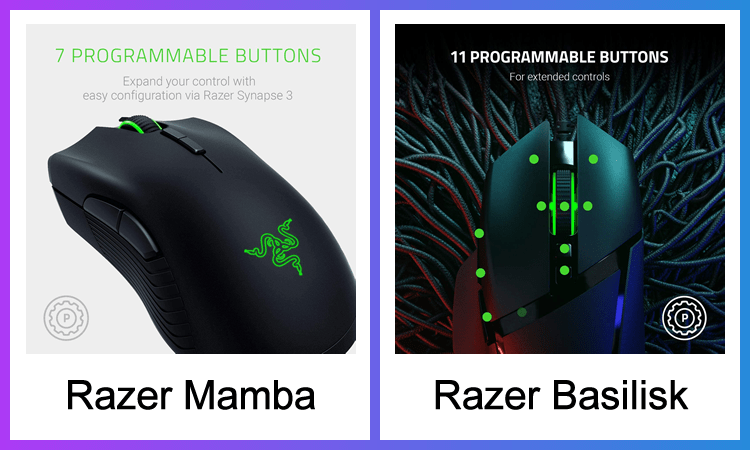 In terms of price, the Razer Mamba Wireless Mouse is originally listed at a retail price of $100, which is $20 more than the original price of the Razer Basilisk V2 mouse.

If you prefer the more budget-friendly option between the two, then you can go for Basilisk V2.

If click latency and portability alone help inform you of your choice of purchase between the two, then the Razer Mamba may be for you.

But the quality of the Razer Basilisk V2 as a mouse in terms of its design, ergonomics, features, and most definitely, the price of the product makes it a clear winner between these two. 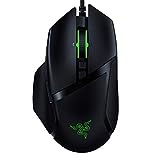