Logitech has swiftly become a familiar brand in the world of technology. The Swiss firm sells everything from regular mouse and keyboards to specialist gaming gear. The webcam is one item that has become increasingly prevalent.

When you take a series of meetings through video chat applications, or you’re an eager live streamer, a decent webcam is a must-have. Logitech has a wide range of webcams to pick from, based on needs and the precise capabilities you want.

Throughout this post, we’ll take a back-to-back comparison at the very popular Logitech C920, as well as the less expensive but still functional Logitech C270.

Both Logitech C270 and C920 webcams are suitable for a wide range of today’s operating systems, so there isn’t much modification required to utilize any of these types. The C270 features a pleasant rounded appearance and is only available in dark grey. It effortlessly attaches to the front of any desktop or portable display, and indeed the flat-panel form makes it appear to be a logical extension.

The sturdy adjustable clip fixes the lens to the surfaces of your choosing, preventing any discomfort with your equipment dropping. The camera on its own is efficiently adaptable, enabling whatever camera position alterations you choose.

The C920, on the other hand, seems to have a more sophisticated, professional appearance thanks to its glossy modern plastic. The high-definition glass lens contributes to the product’s overall quality appearance.

The C920 has additional mounting possibilities than the preceding version. Besides the universal clip, which also serves as a mount, the camera includes a tripod mounting hole at the base.

You may set up the C920, in any of the three ways indicated above, based on the scenario and the type of perspective you require. Additionally, the C920 has the latest edition of a genuine privacy shield so that you can bid farewell to clumpy adhesive coverings.

Both the C920 and C270 are Plug&Play ready, USB-powered (USB 2.0), and compatible with most Windows and Mac operating systems. In clear comparison, the C270 has only a mounting clip type with 1.5 meters cable length, while the C920 can be mounted by either clip or stand with 1.8 meters cable length.

As Logitech’s entry-level model, it’s unsurprising that the C270 doesn’t reign supreme in terms of visual quality. Having that said, the C270 isn’t really that awful.

It has a 720p resolution at 30 frames per second that is sufficient for usage in a professional video conferencing situation. Its sharp 3-megapixel camera is used to snap pictures.

It also features automatic light compensation, so you’ll be fine even if your workstation is a little dim. However, it would still be preferable to use this in well-lit environments. Although the quality is still usable in poor light circumstances, the color brightness may not be as excellent as the C920.

In contrast, the C920 is far superior. It offers a high-definition quality of the video at 1080p/720p at 30 frames per second. It includes automatic light adjustment, like does the C270, but also has unique functions.

Unique functions of C920 include better camera focus with a face-tracking capability, which ensures that you do not seem fuzzy up on the screen. Nonetheless, photographs captured with the 15-megapixel webcam of C920 are more stunning. And, it has a broader field of view, which means it can capture more on screen.

The Logitech C270 includes a built-in mic, which might come in handy in particular scenarios. By default, it has a noise-reducing mechanism, ensuring that your voice reaches the individual you’re communicating to in noisy environments.

Unfortunately, the device can only produce monophonic sounds (or mono). This only implies that the speech you capture with this camera’s microphone will lack quality.

This, however, links in with the C270’s core function and selling pitch, which again is clean and easy HD video communication.  Mono voice won’t be a significant problem if you solely use it for your calls, which are dominated by the connection speed to the internet.

The C920 supports stereo, with two stereo-capable mics on each end of the lens system. This component produces a more genuine, lifelike sound instead of the radio-like sound produced by mono microphones.

Despite being superior to C270, the microphones of C920 aren’t something worth bragging about. Various people have posted that this does not operate while capturing high sound levels.

Although it may not be an issue for most, game broadcasters/ live streamers and other video makers may want to consider investing in a separate headset rather than depending exclusively on a designed webcam microphone.x

Both the Logitech C270 and C920 models come with 2-year warranties, ensuring the finest support Logitech has to offer for any technical difficulties your camera may encounter during the specified time frame. Despite having the same brand, the C920 provides benefits in terms of special features for users.

Both devices are promoted as USB video class-compliant, while there have been some published concerns concerning the patented driver used by the C920. The bundled software does not permit the operation of multiple cameras on the same system.

Furthermore, numerous users have complained that the webcam driver consumes a lot of resources. Unless CPU utilization is something you need to pay attention to for a particular line of business, you’ll need to calculate for it.

Around $59, the Logitech C920 is an excellent Webcam. The Logitech C270, despite being a solid device for its sale price of roughly $20, somehow doesn’t succeed in breaking through from the crowd. Hence, there seem to be superior Webcams than the C270 available for around $20.

Since its debut, the Logitech C920 has regularly garnered positive feedback, with many users stating that it offers exceptional quality at a reasonable price. It’s no surprise that it’s so famous through its high-definition footage, clear still snapshot images, and good built-in microphone.

The extra placement options are also quite useful, as a tripod would give additional support required in certain scenarios. Choose the C920 if you want a webcam to meet your different gaming and enterprise demands without requiring much customization.

The Logitech C270’s affordability, on the other hand, cannot be overlooked. With this webcam, you receive more than you spend on, demonstrating to people that Logitech provides high-quality cameras even when in lower-priced variants.

It nonetheless produces high-quality footage at 720p, and because of its noise reduction feature, the somewhat limited audio capacities aren’t a deal-breaker. If you need a webcam for video chats and seek an option that won’t affect the budget, the C270 is an excellent choice. 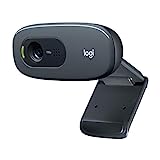