When two products are almost identical, it can be challenging to choose which one is the best. Such as the case with selecting between GXT1000VP4 and GXT1050VP4 – two reliable walkie-talkie models by Midland. You’d probably end up choosing either one of them, and that’s ok. But if you want to get your money’s worth, it will be helpful to assess them in terms of their specifications, features, and prices, to name a few. Let’s get to know each of them in this article.

There are almost no differences between the Midland GXT1000VP4 and the GXT1050VP4. Although the GXT1050VP4 is specified one mile more range. However, this should not be noticeable in practice. Thus, the only difference is the different appearance of both walkie-talkies.

Setting up these handheld radios is easy and fast. Of course, you need to assemble the parts first because the package doesn’t come with assembled devices. Don’t forget to install the rechargeable battery packs into the back compartments of the walkie-talkies.

Once you have entirely assembled them, rotate the power knob to turn on the devices. Select the frequency and make sure that they are the same in all handheld radios. Press the talk button to start transmitting messages to each other.

The basic setup of Midland GXT1000VP4 and GXT1050VP4 is straightforward. The challenge comes when you configure the devices according to your preferences. It’s a bit technical to configure, so it’s important to thoroughly the user manual to ensure that you’re doing it right.

To simply put it, Midland GXT1000VP4 and GXT1050VP4 are waterproof. They are rated with JIS-4, which means they are built to withstand water splashes when they are used in wet environments. However, their waterproof rating doesn’t guarantee their survival if they are submerged in deep water.

Although most of their parts are waterproof, it is not advisable to use them underwater, even if it’s just for a few minutes. Submerging the devices into the water can potentially damage their internal parts, causing them to malfunction.

These two handheld radios have similar power sources. To power up the devices, you can use four AA alkaline batteries or NiMH rechargeable batteries. They are included in the package. These two options are ideal, especially if you need to use the devices for long hours or you are assigned to a place where recharging the walkie-talkies is difficult.

Using the alkaline batteries will support the portable radios for 24 hours. It can even be longer if you try to rest the devices when they are not in use. This is an excellent option if there is no way for you to recharge the radios.

Meanwhile, the rechargeable batteries can last up to eight hours, and they are recommended for emergency uses, or you are out of Alkaline batteries. The initial recharge is 24 hours, then 12 hours for the next charges. As much as possible, turn off the devices when charging them to avoid damaging the batteries.

One of the important factors in choosing a walkie talkie is the range it covers. Theoretically, both GXT1000VP4 and GXT1050VP4 have maximum coverage of 36 miles. But it can vary, depending on the current conditions of the environment.

If there are no obstructions and the weather is fine, the transmission can flow smoothly and as far as the said range. But, for example, if you’re in the mountains, it can be difficult to use the devices with a long distance apart.

When it comes to the frequencies, both walkie-talkie models are also similar. They have a frequency range of 462-467 MHz, and they are compatible with FRS and GMRS channels. You can choose from 22 channels to set as a transmission frequency and an additional 28 channels that you can use for privacy codes. All available channels can be used for clear and unobstructed transmissions between the handheld radios.

FRS channels are safe to use without getting a license for the walkie-talkies. But if you wish to use the GMRS channels, make sure that you can secure a license from the Federal Communications Commission (FCC) before using them. You can be liable if you’re caught using a GMRS channel without a license. To play it safe, you can read the FCC rules here.

So far, both GXT1000VP4 and GXT1050VP4 still have no difference that sets them apart from each other. And with that, it won’t be surprising to know that their features are also similar to each other.

Both walkie talkies feature the eVOX or Easy Voice functionality that allows you for hands-free radio operation. There is no need for you to press any buttons. You can just activate the devices with your voice. They also feature auto-squelch, which automatically cancels noise background, especially if the signal is weak. You can still hear each other despite the low signals.

Knowing the weather forecasts is important when using these devices. It’s for this reason why both GXT1000VP4 and GXT1050VP4 have the NOAA weather alert. This feature automatically connects the devices to the best weather channel, showing you real-time weather forecasts and updates on the screen.

Because of how closely similar they are to each other, you can say that their prices are also the same. Think again, because one model is more expensive than the other. And if we compare these models to other portable radios on the market, the Midland GXT1000VP4 and GXT1050VP4 are within the pricey range. That’s understandable, considering the sophisticated specs and features that make them outstanding walkie-talkies. So, with that in mind, how much do they cost?

Between GXT1000VP4 and GXT1050VP4, which one should you choose? If the number of features is what you’re after, go for the GXT1050VP4. It’s one feature higher than the GXT1000VP4. But whichever one you choose, you still win. They are great walkie-talkie options that you can use for various situations and even big events. They have similar specifications, functionalities, and features, so it all boils down to the price. Choose the model that is within your budget. 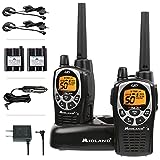 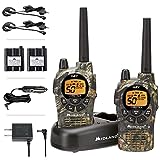