Liquid CPU coolers are some of the most popular additions to any PC setup. As part of heat management, the coolers function to keep down temperatures in the internal space of the CPU. Without a proper cooler, your setup may have raging temperatures, and cooler room temperatures may not be enough.

As such, NZXT devises a lot of products that fit CPU models. Part of the company’s product lines are liquid CPU coolers that help keep the CPU at manageable temperatures. The Kraken Z63 and Kraken Z73 are part of liquid cooler product lines of NZXT.

If you’re looking to upgrade current coolers, or you want to elevate the look of your PC setup, why not consider Kraken Z63 and Kraken Z73? Any model is an investment in the durability and value of the gaming PC. The sooner you install higher-end coolers, the sooner you can use cooler PCs with lower heat generation.

Let this guide help you choose between the two models.

The NZXT Kraken Z63 and the NZXT Kraken Z73 are identical in terms of technology and construction. Basically, the Z73 is the larger version of the Z63. Accordingly, it has a larger radiator, an additional fan and thus more cooling capacity. However, that is the only real difference.

Each computer model and part are unique. As such, you can’t expect a standard one-size-fits-all cooler, especially if the CPU case is not vacant enough to house these gadgets. There is a lot of consideration from the user for easier installation.

There are many models that the Kraken Z63 and Kraken Z73 can cater to. You may want to measure the CPU case first to determine which model works best for you as well. You don’t have to worry about not getting any cooler from NZXT that works best for your system.

The product inclusions of both models range from the individual cooler units up to the necessary hardware. In packages, you will find the following: cooler, documentation such as installation guide and warranty, brackets, backplate, screws, washer, cable, cable ties, and different socket types.

Cooling power means the ability to remove heat. As the liquid CPU cooler works, the generated heat from working CPU parts is removed from the inside of the CPU. Liquid CPU coolers prevent overheating potential and lessen expenses from possible energy insufficiencies of the process.

The Kraken Z73 is a much bigger model than the Kraken Z63. It has an additional block of fans that can help cool CPU units faster and more efficiently. However, the benefits present in the Kraken Z73 may disadvantage the model in terms of price and size. Since the model is bigger, there should be more vacant room for installation.

The Kraken Z63 has two fans, and the Kraken Z73 has three fans.

CPU builds elevate with RGB lights. The fading lights in a dark room can make your gaming PC the focal point of any space. As such, many gamers also invest not only in the performance of PC parts but the looks as well.

Both liquid cooler models sport a full LCD. Both the Kraken Z63 and Kraken Z73 have LED lights on the side enclosure of the fans. You may see spinning fans in various light variations.

The liquid CPU coolers are only available in matte black material. There is no other for the material color of the models.

The pump head display of the Kraken Z63, and Kraken Z73 has a full LCD and is RGB Ready.

The pump heads make use of a 2.36″ LED display with 24-bit color. This display is present for both the Kraken Z63 and Kraken Z73.

Modification is key to getting the settings that work for your liquid CPU coolers. You can access these controls and functions via the NZXT CAM software from the NZXT website. 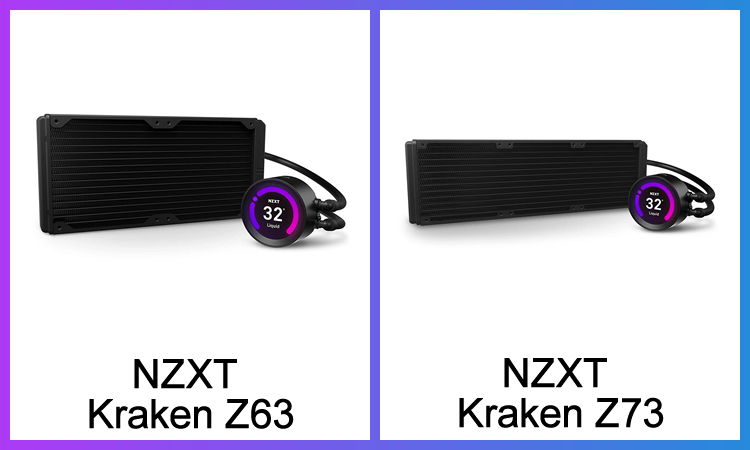 View the Z63 on Amazon

The liquid cooler models only produce faint noise, and it’s not something that would cause a lot of distraction, standing at around 21 to 38 dBA for Kraken Z63 and slightly lower for the Kraken Z73 model at 21 to 36 dBA.

Many gadgets consume power efficiently. The Kraken Z63 and Kraken Z73 draw about 4.56 Watts and 3.84 Watts of power, respectively. 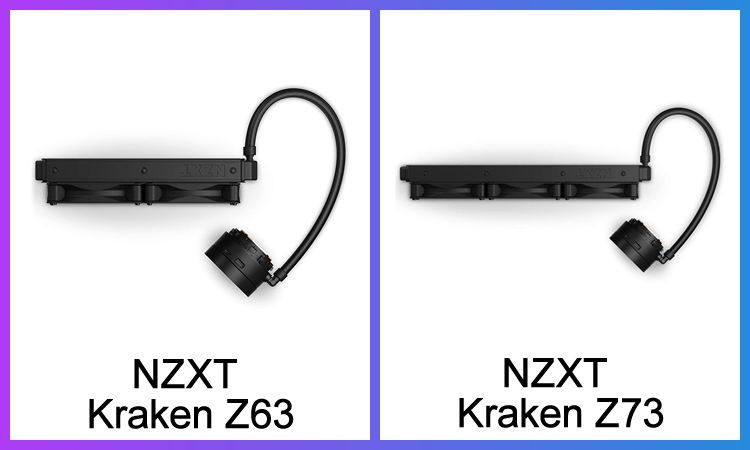 View the Z63 on Amazon

The Kraken Z63 costs around 259.99 USD, and the Kraken Z73 costs 289.99 USD. There is only around 30 USD difference for one package order which means the prices are not very far.

The Kraken Z63 and Kraken Z73 are very close in function and features. The only difference is that the Kraken Z73 model has one more fan than the Kraken Z63. There is no clear winner since both models fit only in appropriate settings.

The Kraken Z63 is smaller in size but has a bigger fan size. There is more exit for airflow from inside the CPU as compared to the Kraken Z73. The airflow rate of the Kraken Z63 is higher at almost 100 Cubic Feet per Minute (CFM) at maximum function.

The Kraken Z73 has a lower CFM rate at almost 25% less than the maximum of the Kraken Z73. However, there are more fans with smaller sizes, which means more fans airing out the heat.

Depending on what your CPU can accommodate in size, the more suitable model will fit your setup. 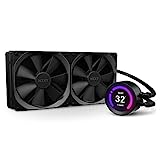