All-in-One Coolers or AiO’s are getting more and more recognition in the PC market. Most people looking for good-looking and performing PCs use AiOs. From their clean and good looks to their cooling performance, no wonder why more people want to buy them.

NZXT is one of the gaming industry’s leaders. NZXT has already built a reputation for itself in the gaming community despite its age. The company provides a variety of gaming peripherals and hardware. The NZXT Kraken Z73 is one of NZXTs AiOs in the Kraken Line.

Corsair is also one of these gaming industry leaders. Corsair has been in the industry for a long time, providing consumers with all the gaming peripherals and hardware they need. The H150i is an AiO sold by Corsair in their Hydro Series.

If you’re looking to purchase AiO’s to upgrade your computer or to build your own, let’s compare the NZXT’s Kraken Z73 and Corsair’s H150i Elite Capellix to see which one is the better choice for you.

AiOs are made to be compatible with different PC Components. Different sized AiOs can fit different sized cases and different CPUs depending on what you choose. The Kraken Z73 and H150i Elite Capellix are no exception to this rule.

Both of these AiOs give you a ton of compatibility from the case to the CPUs. They are also very easy to install.

If you’re choosing to go with either the Kraken Z73 or the H150i, you’ll need a large case for them to fit. Since both the NZXT Kraken Z73 and the Corsair H150i are 360mm AiOs, they can only fit inside Full Tower or Mid Tower Cases; anything smaller won’t fit.

Both the Kraken Z73 and H150i Elite Capallix do include brackets for installing into different boards or sockets. This can help when installing the AiO into different socket types without the need of buying brackets additionally.

Installing the Kraken Z73 and the H15i are similar, just like every other AiOs. First, you need to figure out where you want to put the radiators, then install the CPU Block with the correct bracket on the motherboard (after installing the CPU and other hardware that you can.). Then you can screw in the radiators and fans on their locations and plug them in.

AiOs are made to provide more cooling power and efficiency to help your CPU even under heavy use. Both the Kraken Z73 and the H150i are said to have excellent cooling power. With their powerful fans and large radiators, they are sure to keep your CPU cool.

Both AiOs have almost the same cooling power, with the H150i does have faster fans that help with cooling.

The Kraken Z73 and the H150i can hold three 120mm fans already included in their packages. So you don’t have to worry about purchasing fans when you buy these AiOs.

The Kraken Z73 to force air through the radiator, NZXT includes three 120mm AER P120 fans with fluid-dynamic bearings. Each fan blade features inverted wings near the tip and is enclosed by a different molded shroud at 2000 RPM (max). The H150i Elite Capellix comes with three 120mm ML120 RGB fans that can spin up to 2400 RPM and send cold air towards the radiator.

Both the Kraken Z73 and the H150i have 360mm radiators that can help with the cooling power. Because 360mm radiators are long, they have a  larger surface area that helps the cooler remove excess heat efficiently.

The Kraken Z73 has an all-black look and has a simple and minimalistic approach, and it’s also RGB-ready. The H150i Elite Capellix has a more “Gamer Focused Design” with its bright RGB lights all around.

If you want a flashy setup with RGB Lighting and a more gamer theme, go for the H150i Elite Capellix. If you want your setup to be more minimalistic or plan to have a blackout build, you should choose the Kraken Z73.

The Kraken Z73 does not include RBG Fans right out of the box. In contrast, the H150i does have RGB Fans included in the package.

The H150i has two colorways, white and black. The Kraken Z73, on the other hand, only comes in the color black.

The H150i Elite Capellix only has an RGB Pump Head, but it does include two separate pump caps that can give you the chance to customize your AiO according to your preferences. While the Kraken Z73 has an LCD Display on the Pump Head that can indicate the temp in real-time, it can be customized to show animations or GIFs of your choosing.

Even though the NZXT Kraken Z73 doesn’t include any RGB Fans, it is RGB Ready and can sync up with any NZXT products you have. The H150i has Corsair’s ICUE system integrated, meaning it can be customized and synced to other Corsair products that support ICUE.

The Kraken Z73 and the H150i are fantastic AiOs that provide excellent performance and are made from quality materials. The clear winner for this comparison would be the H150i Elite Capellix, whose quality performance, good looks, reputable brand, and low price win over NZXT’s Kraken Z73. 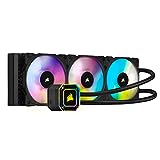