Heat management is something important in using PCs for long periods. Continuous use of a computer means that there is always a constant flow of power in the system. The computer system turns on for extended periods, but the process produces heat as well.

If you want to maintain the durability of the CPU, liquid CPU coolers are the next best investment for your build. There are many models and brands out in the market, and NZXT doesn’t have a shortage of liquid CPU cooler models for most CPU models of gaming computers.

You don’t need to look anywhere else. NZXT has the Kraken X63 and Kraken X73 to cool down the CPU. The cooling technology of these cooling devices can be the solution you’re looking for to handle the heat byproducts of long gaming sessions.

Let this guide help you in choosing the more suitable model for your PC setup.

The NZXT Kraken X63 and the NZXT Kraken X73 are very similar, which is not least due to the same manufacturer. Basically, the X73 is the three-fan version of the X63. Accordingly, the Kraken X73 requires more space, but can cool the CPU better in the same ratio.

Liquid cooler installations can be a bit tricky than most. After all, you are integrating another vital part of the PC into the CPU. However, the Kraken X63 and Kraken X73 are simple to install, and NZXT has a lot of support documents to guide users in putting in the liquid coolers inside.

The Kraken X63 and Kraken X73 fit in most CPU models. According to NZXT, these are the models that can cater the liquid CPU cooler devices:

Nevertheless, both models fit comfortably within compatible models. The only drawback is the strategic placement of the fans in the CPU of the gaming computers.

Supporting documents and guides are present for both models. The Kraken X63 and Kraken X73 have installation guides that are available in various languages.

The Kraken X73 has three standard fans in the unit. Compared to two fans of the Kraken X63, the former has more power and capacity to cool any internal space of a CPU. If you want a faster cooling rate, then the X73 has more capability to do this.

The Kraken X63 has two fans, while the Kraken X73 has three fans. Looks can be everything or nothing. We all live in an age where there is a good appreciation for pleasing aesthetics. Design, build, and eye-pleasing PC setups often win impressions of the audience.

The Kraken X63 and Kraken X73 have LED lights on the fan. Unfortunately, the only color selection of the fan material is matte black.

There is no difference in the color choices of both models. The cables, radiator, casing, and other inclusions are matte black.

The Kraken X63 and Kraken X73 make use of fluid dynamic bearing. You have an assurance that parts are long-lasting.

The Kraken X63 and Kraken X73 have LED lights on the pump heads of the unit. These liquid CPU coolers also sport an infinity mirror design.

Customization is key to getting the feel and look of the setup you want. Luckily, there is NZXT CAM software to modify the settings of the Kraken X63 and Kraken X73. NZXT provides additional functions and iterations via the software. The power consumption of both models may differ a bit from each other. While the Kraken X63 consumes 4.56 Watts, the Kraken X73 consumes 3.84 Watts.

In terms of capacity and price, the Kraken X73 performs better. The model has more fans that can disseminate heat faster and powers for much lower power consumption. Not only do you save power consumption, but there is faster action, and it is by controlling the flow of the heat from one part of the CPU to the radiator.

Sometimes, your basis may not fall on the aspects of the liquid coolers, and you may be choosing with regards to how big space consumption is in your PC build. The Kraken X73 is better for bigger CPU casings, while the smaller Kraken X63 can fit in most standard-sized CPUs.

If you can install the Kraken X73 on your CPU, it’s best to go for it. The slight price difference is worth the additional fan in the model. 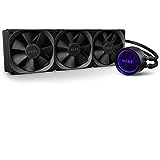