CPU Coolers help with cooling the CPU to avoid fire hazards that may occur with heavy uses. AiOs, or All-in-One Coolers, are CPU Coolers that offer better CPU cooling than traditional CPU Coolers. It uses a system that circulates liquid towards the CPU Block with tubes and cools the liquid in radiators.

Corsair is one of the world’s top gaming gear. The company has produced many gaming peripherals, including AiOs; one of these AiOs is the H115i.

NZXT is also one of these leaders in gaming gear. Being a young company, NZXT has already made a name for itself in the gaming community. The company sells multiple gaming gear and peripherals, even AiOs, like the NZXT Kraken X63.

Let’s compare the Corsairs’ H115i and the NZXTs’ Kraken X63 to see who would win head to head, which of the two has better features, cooling, and price point.

There are only minimal differences between the Corsair H115i and the Kraken X63. In terms of size and cooling performance, both components are almost identical. Therefore, you should see for yourself which liquid cpu cooler fits better to your budget and your pc. Our comparison table will help you:

The Kraken X63 and H115i are 280mm radiators that fit the top and front of full tower and mid-tower cases. So if the H115i can fit into a case, then the Kraken X63 can fit in it as well.

Installing both the H115i and the Kraken X63 is similar to any AiO installation. Select where to put the radiator, screw the fans and radiator in place, but the CPU Block on the CPU. Most Coolers already have thermal paste on the contact points; if needed, put thermal paste on the CPU, then place the contact point. Afterward, screw the unit on the Motherboards Cooler mounting slots.

Both the Corsair H115i and NZXT Kraken X63 are powerful AiOs. But there are differences that these 2 AiOs have that show the differences in their cooling power.

The radiators of both the H115i and Kraken X63 can accommodate two 140mm fans. These coolers do have included fans right out of the box.

The included fans of the H115i include Corsair’s ML140 PWM fans from Corsair can reach maximum speeds of 2000 RPM or be turned all the way down to 0 RPM when temperatures drop. While the Kraken X63 includes the NZXT’s Aer P fans can reach speeds up to 1800 RPM; however, no 0RPM mode is available.

The H115i does have faster fans, which contributes to cooling; the difference would be the radiator size and pump power. This means the Kraken X63 does offer better cooling than that of the H115i.

The Kraken X63 has better cooling compared to the H115i, even with their different fan speeds. It is more efficient and has a more powerful pump. 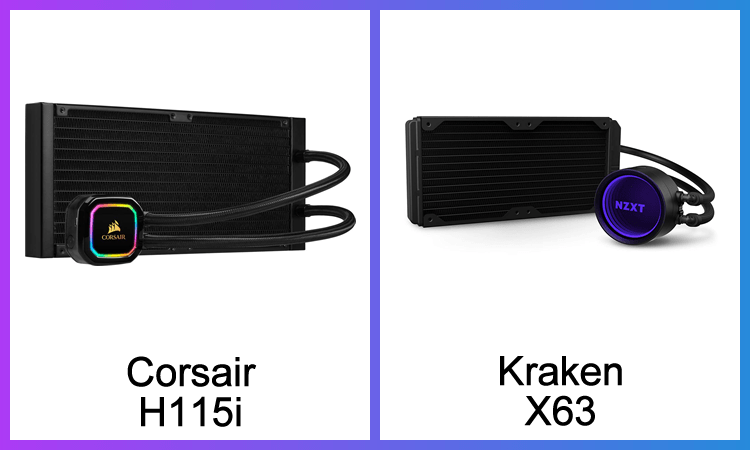 Both of the AiOs have their distinct look. Being an older unit, the H115i has a simpler, rugged design. While the Kraken X63 has a more modern, minimalistic design since it was released much recently.

Only the H115i has included LED Fans when purchasing the AiO. The Kraken X63 does not come with LED Fans.

The H115i has an octagonal CPU Block design seen on most Corsairs AiOs and does not have a display. The Kraken X63s CPU Block has a circular design and a fake display, but it does help with the RBG Lighting it has.

Painted in black, both the Corsair H115i and the Kraken X63 look clean and minimalistic. These coolers can fit most themes of Custom PCs right out of the box, except for white builds.

The H115i is compatible with Corsair’s iCue System, which can help with synchronizing RGB Lighting.

Both the H115i and the Kraken X63 only have noise levels below 50db, which is pretty silent compared to the fact that these coolers are powerful. These coolers won’t become too loud even on high usage.

If you don’t really mind the sound of the cooler but focus more on its power, you should go for the Kraken X63. But if you want a quieter build and won’t be using it on heavy gaming and tasks, go for the H115i.

Both the H115i and the Kraken X63 only need a 12V DC. The Kraken X63 consumes 4.56w, while the H115i doesn’t have information about their power consumption. But you won’t have to worry about it too much if you plan on building a high-end pc.

Both the Corsair H115i and the NZXT Kraken X63 are at the same price point, costing less than 200$. These are not the cheapest AiOs in the market, but they’re also not the expensive ones.

There isn’t a clear winner for this comparison because the differences between these coolers are so minimal. Both coolers look good, quiet, and perform great. But these coolers do fit in specific categories in between different preferences.