What are you looking for when shopping for a gaming keyboard? Are you crazy about the ergonomics, design, and overall quality of a keyboard? Or do you prefer a budget-friendly model that does better for a keyboard in its price range than most?

All those things that were mentioned and more can help guide your choices when buying a keyboard for your gaming setups.

In this article, we will check out two of Logitech’s gaming keyboard releases- the Logitech G513 and Logitech G413 Mechanical Keyboards- to give you an idea of which of these products suits your taste as a gamer or a PC user.

Logitech has continued to be one of the leading gaming accessories brands in the industry right now.

And when it comes to gaming keyboards, you can never go wrong by choosing from their line of high-end gaming releases.

As pioneers of the industry, the company always innovates their previous ideas from their previous products to follow them up with even better releases.

A great example of the company’s strong drive to product development comes with their product, the Logitech G513 Mechanical Keyboard.

The G513 is their perfected version of their previous release, the Logitech G413 Mechanical Keyboard, improving upon the established aspects of the latter to be a more cohesive product for gamers.

To give you context on the upgrades Logitech incorporated on G513, we’ll give you a comprehensive review of these changes as follows:

The Logitech G513 and G413 keyboards use the industry-standard non-detachable braided USB 2.0 cable but varying lengths.

G513’s cable has a decent length of about 6.6 feet long and has a great deal of stiffness to retain kinks and endure strong pulls, so it does not detach from the board itself that easily.

But for those that find too much cable length to be inconvenient due to problems like dangling and difficult tangles, G413’s 5.9-feet long cable may be a more fitting length to keep those from happening to you.

Both cables also come with a USB pass-through, which is very useful in case most, if not all, of your computer’s USB ports, are busy.

Both the G513 and G413, upon the first release, include Romer-G tactile switches in their builds make their users’ typing experiences very light and easy.

And speaking of Romer-G tactile switches, the biggest reason why such switches have a great feel to them is that these have small bumps before the keys reach the actuation point for a quieter and lighter typing experience.

The tactile bump within the switch is small enough to make the travel distance fast, giving them low latency that makes the keys feel responsive while typing (Cherry MX Brown switches stood no chance with these switches’ typing quality).

Romer-G Tactile switches pairs well with the keycaps of both products as they feel solidly attached to these switches.

The materials of these keycaps, however, make for a lackluster experience when greased heavily from your fingertips (more about the keycaps later).

Unfortunately, though, current releases of Logitech G513 have downgraded their switches to GX Brown, Blue, and Red switches as part of their builds.

Although the actuation force and total travel increase with these changes, the typing quality remains comfortable and not as fatiguing as you would expect from a downgraded build.

For an upgrade of G413, G513 did not change much in terms of extra features on their keys.

Both products are designed to have a Numpad, Windows key lock, a Caps lock indicator, and a USB pass-through as parts of their builds.

Both G513 and G413 include media keys and are located on six of the hotkeys of each keyboard.

However, if you’re looking for keyboards for your home theater PCs, then you’re better off using wireless keyboards instead of these two.

The other function keys of G513 and G413 are macro-programmable and could be customized in the Logitech G Hub software (more on this later).

Both products extend the number of USB ports of your PCs with the addition of USB pass-throughs. Busy USB ports are a typical problem in PCs (especially in robust gaming setups), and an added port is very useful for these types of problems.

Both G513 and G413 adds backlighting features to add aesthetic to their build. What differs between the two products are the backlight colors available for each product.

The G513 improves upon the backlight features of its predecessor with its introduction of white lighting, which mixes well with the black keycaps and frames of the product.

The RGB lighting for both keyboards, however, works poorly with the keycaps especially if set at the highest brightness level.

G513’s backlight colors can be changed between RGB and White and customizable with the Logitech G Hub software on your devices.

As full-size keyboards, both products take up a large amount of desk space, especially the G513, which includes a detachable wrist rest upon purchase.

Both frames are made of plastic with aluminum faceplates that give the products a sleek, modern feel with hardly any noticeable flex.

Meanwhile, their rubber incline feet grip well and do a great job holding both products in place.

Both products, however, include cheap-looking ABS plastic keycaps, which oil up fast after use and wobble a bit while typing. You may be better off shopping for better quality keycaps online instead if you find typing with them slightly uncomfortable. 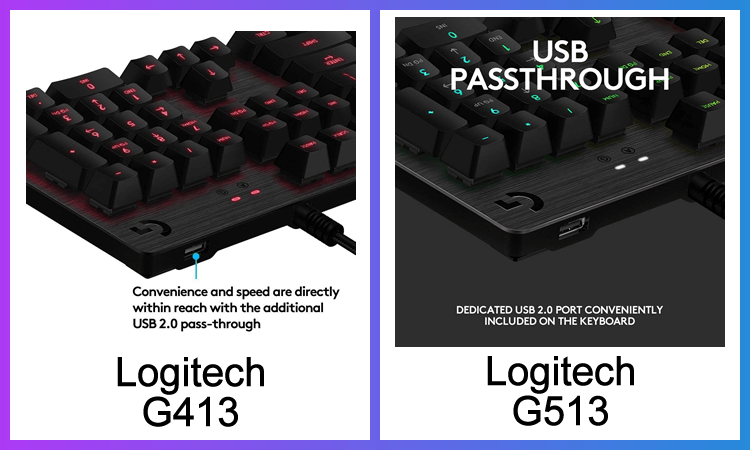 Thanks to the Logitech G Hub software program, both products have a customization feature.

With this program, you can customize your macro-programmable keys and backlight settings, and it is relatively easy to use.

Additionally, for Logitech G513, its backlight settings also feature color-changing features to allow you to choose between RGB and white colors for your keyboard.

The Logitech G Hub program is compatible with both Mac and Windows OS devices and includes Cloud Sync features to allow you to save your keyboard settings.

In terms of the ergonomics of both products, the G413 and G513 have nearly the same level of comfortability with slight additions from the latter.

If you are looking for a higher incline between the two products, then you would be more inclined to buy G413 because of the 0.5-degree difference.

However, the issue of G413’s wobbly incline is improved in G513, making your keyboard feel a lot steadier than the former.

G513 also includes a detachable wrist rest for you to relax your wrist while typing or gaming.

For a full-sized gaming keyboard, the Logitech G413 keyboard is much cheaper and better than G513 price-wise.

The G413 only costs $80 in the retail price, while G513 costs $150 at the moment and is a lot less budget-friendly despite having almost the same features as the previous one.

The added quality of the Logitech G513 Mechanical Keyboard may take many consumers’ attention away from the Logitech G413, but the price may entice some to choose G413 right now over the other.

As an upgraded version of G413, G513’s added features like a wrist rest and white backlighting colors are barely noticeable given how both products have quite similar performance overall.

But if you are one of those consumers that notice minor differences like the typing quality of both products, then G513 may be the fair choice for you either way. 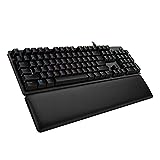