When it comes to your first keyboard setup in your gaming PC, there are many trusted brands worldwide. The sphere of competitive PC gaming starts with the basics, which are your hardware and devices. High-end items give a better gaming experience, and as such, it is always a worthy choice to invest in suitable hardware.

One of the most popular brands around the world is Logitech. Logitech’s specialty is giving diverse and functional products suited for a better gaming experience. When it comes to technology and user interface, you can’t go wrong with Logitech’s product lines.

If you’re looking for your first gaming keyboard, why not consider Logitech? Let’s start with Logitech G413 and the special edition Logitech G512.

There are generally two types of keyboard connections to a PC setup. First, you have wired keyboards, and then you have wireless keyboards. Then, you have keyboards that can support both wired and wireless functions for better compatibility. Each type has its benefits and disadvantages, considering the use of the device.

The Logitech G413 and Logitech G512 are wired mechanical keyboards that use cables to connect to the PC ports. Unlike many keyboard models with Bluetooth functions for a wireless function, these two models can’t connect wirelessly.

Both cables have two USB-A ends on one side for connection. You should plug in both ends to use the keyboards fully.

Switches or key switches refer to the technology of the key buttons you push down on the keyboard. Many models differ in key switches to produce the smoothest and most responsive keys on the model.

Logitech G413 uses Romer G-Tactile switches. The keyboard caps are more tactile to the sense of touch and have a shorter travel distance before the system registers a keystroke. Romer G-Tactile is speedier for gaming as the keys are enhanced to register faster feedback from the user from the moment you press down a key.

The downside is it is more prone to errors as side-by-side keycaps are all responsive and soft to the touch. It takes a little more accuracy to ensure that you don’t commit mistakes while pressing the keys.

On the other hand, the Logitech G512 uses a GX Blue Clicky switch. The keyboard switches are more clicky to the touch yet only needs light pressing to register user feedback from the keycaps.

The downside of the GX Blue Clicky key switches is that it has a longer pre-travel distance, so you need to press more of the keycaps down before the system senses feedback from the keyboard. You’ll need more force to operate the keyboard compared to Logitech G413.

It’s always good to have extra function keys for more customizations. After all, you are the one who’s going to use the keyboard. Feature keys always elevate some function and experience to any user.

Both models sport a numpad on the right side of the keyboard interface.

Both the Logitech G413 and Logitech G512 have hotkeys for media functions. The top keycaps have dual functions for the keyboard.

Both models only have dedicated keys for macros programming. The macro programming is more accessible through the software of both models.

These keyboard models don’t have a wheel.

There is a USB passthrough option for both the Logitech G413 and Logitech G512. If you want to plug in a mouse device, you can do this through the USB port of the keyboard for more convenient use. 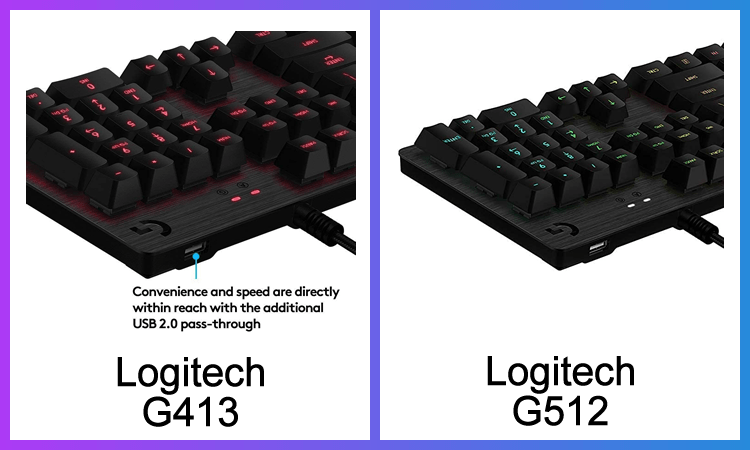 Windows key lock becomes significant when you don’t want to accidentally return to the home screen in the middle of the game. Luckily, both models have a windows key lock to prevent you from gaming distraction.

The caps lock key for the Logitech G413 and Logitech G512 have a light indicator.

The keyboard’s design is the most prominent feature of the keyboard models. Many gaming PC setups sport aesthetic keyboards that function well during games and provide good entertainment for the audience.

Logitech G413 has a red backlight compared to Logitech G512’s RGB backlight. Each key has an individual backlight so you can see the keys even when it’s dark.

The Logitech G512 has programmable RGB effects, so you can showcase various keycap light arrangements in the colors you want.

The Logitech G413 and Logitech G512 mechanical keyboards have the same software support. These models are part of the Logitech G Hub software to see the functions and additional support in the software.

Logitech G Hub is compatible with both Windows and macOS models. You can create multiple user profiles for a customized user experience for every person who will use your keyboard. 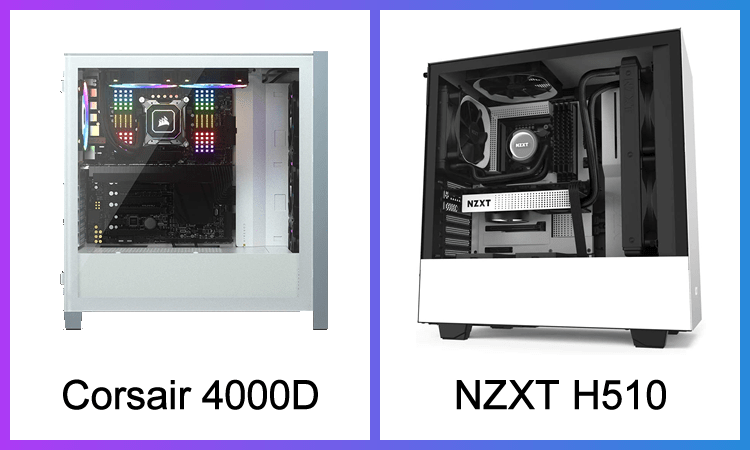 Ergonomics refers to the more sensory aspect of the keyboard. Even if both models share a straight keyboard orientation, there is a slight difference between the Logitech G413 and Logitech G512.

Unfortunately, both models don’t have a wrist rest on the interface, so you’ll need to rest your wrists on the table surface to avoid touching any other keys.

There isn’t a significant defining feature between the two models that sets the keyboards apart. The similarity of both devices boils down to the basics. There aren’t any substantial changes in experience for any user in terms of functionality and operation.

If customizable and entertaining RGB lights matter to you, go for the additional 100 USD to get the Logitech G512 Special Edition. Otherwise, the Logitech G412 is already a good starter mechanical keyboard with a good red-colored backlight for key indications in the dark.