Computers need cooling to avoid overheating and potentially breaking your components, which could cost you a lot of money; that’s why it’s one of the most important things you need to consider when building a PC. If it’s your first time building a PC, you can prevent this by ensuring that the air inside your case is constantly moving hot air out and cool air in.

PC Cases today offer excellent cooling capabilities with a much more open and modern design, giving the users more ways to add fans that would also increase the case’s cooling power. But sometimes, you’ll have problems with the pressure inside the case not allowing the air to go in and out correctly. You have to consider how to build the proper amount of pressure that your pc needs to allow the case to give your components the best airflow you can. 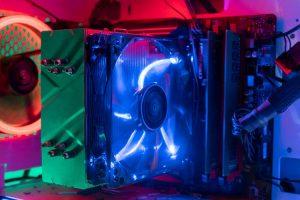 What is Positive Air Pressure?

When you’re focusing on cooling, you have to ensure that there is airflow that goes in your case to push the hot air out and pull air from the inside. Positive air pressure happens inside a computer when the fans blow more fresh air into the case than blow air out. It usually occurs when you have more intake fans (fans oriented to pull air from the outside the topic to the inside) than exhaust fans (fans oriented to push the air inside the case outward)  installed or when the intake fans have a higher airflow rate than the exhaust fans.

Positive air pressure appears to be a good thing at first appearance, but if adequate external air movements don’t occur, you may end up with a lot of stagnant air within the case. Having more fans that draw air inside is a big part of cooling the PC, but it doesn’t mean that you have to have most of your fans drawing air in and having just one or two blowing air out. It also helps filter dust since the air pulled inside goes through filters and fans, cleaning your computer.

This does help the case constantly have cool air because of the constant air intake, but it doesn’t help the case release the hot air from your components. It may increase the temps of your case, but it might end up causing damage to the parts inside because the air might heat up.

So negative Air Pressure is the Opposite?

Again, this appears to be a viable method of cooling down your PC at first glance. However, it can increase the number of dust particles within the PC case from any open seams or panels that aren’t sealed off properly; installing a filter or mesh panel can help deal with the dust particles.

Negative Air Pressure does help with keeping the hot air out, but it doesn’t allow any cool air to come out of the case. It pulls dust inside the PC since the only places that air from outside is drawn from areas that the air can go through but is not filtered compared to Positive Pressure.

What’s the best Air Pressure on a PC Case?

Since both positive and negative pressure has their pros and cons, you must wonder which of the two is better to have. To achieve proper cooling in a case, the best air pressure you can have has to balance Positive and Negative Air Pressure. This type of pressure is called Balanced Pressure or Neutral Pressure.

You don’t want your fans to be fighting a losing struggle against air pressure for the greatest airflow. The most efficient approach to cool your computer is to use a balanced arrangement, yet you should use a slight positive pressure if you can avoid it.

You can achieve Neutral Air Pressure when the intake and exhaust fans blow the same air into the PC case. It happens when a PC case has an equal number of intake and exhaust fans installed. It also makes the airflow and cooling power of your pc to be stronger and have much more stability than having positive or negative pressure.

Neutral Air Pressure is the best air pressure for a PC case because of its balanced nature, regarded as the optimal airflow pressure. The air pressure and temperature within a PC case are more conducive to the effective operation of all components.

Should I use positive or negative Pressure if I can’t achieve neutral Pressure?

If the case you have doesn’t have enough space to have an equal number of fans for intake and exhaust, you won’t achieve Neutral Air Pressure. You should choose the correct pressure you need, but choosing between Positive or Negative Pressure would come down to many different factors.

If you live at a place where dust is all around from people coming in and out, pets you live with, or the environment around the PC, Positive Air Pressure would be a good choice. It keeps dust from the components that may short them out and prevents fans and heatsinks from breaking or clogged.

If your pc is somewhere safe from dust and is relatively cool, may it be from your environment or climate, you can go with Negative Air Pressure. It does help out with PCs with higher ambient temps, and you could have hot spots and turbulence issues that may break your PC if you don’t have constant maintenance on the PC.

As Cases continue to evolve and become better at cooling, the pressure from cooling is something you have to look at before building or upgrading your PC. You have to make sure that you can balance your airflow to avoid breaking your precious components.

You should always try to achieve Balanced or Neutral Pressure to help your parts and case have proper ventilation. Even if it’s a temporary build, or if you plan to upgrade your parts in the near future, keeping it from overheating is something you have to think about.

Different cases contribute to installing and orienting your fans, but choosing the correct pressure for your PC is essential for cooling and building a PC. Be mindful of what you can do with the case you select and its capabilities and limits.

As significant as it may appear, the idea of heat rising does not have a considerable impact. It’s entirely acceptable to draw cold air from the top and exhaust hot air from the bottom of your computer case; it’ll even prevent dust from gathering at the bottom. It’s best to create the correct pressure with the case you choose, whether it may be Positive, Negative, or Neutral Pressure, to provide the best cooling for your case and components.