PC building is a hobby surging in popularity because of how accessible and fun it can be. Enthusiasts usually use these rigs for gaming, streaming, or editing. There are many parts to a PC, and while most people would start from choosing what processor or GPU combination they will be running, they often overlook an essential role. The PC casing is a good example because most builders select a PC case depending on unimportant factors such as colors and casing shapes.

There are far better specifications to consider when choosing a PC case, such as the dimensions, cable management options, and motherboard compatibility. Since cases are also the external body of the whole machine, you should be thinking about its life span very carefully. In most cases, it is better to select a manufacturer that has been already known in the industry for its outstanding products. NZXT is one good example. These cases are crafted for consumers on a budget but still looking forward to a solid build.

This article will talk about two examples of high-quality PC cases, the NZXT H510i and H510 Elite. We’ll do our best to compare each, highlighting even the smallest detail that we can find.

It is always essential to know enough about the dimensions and compatibility of the PC case you will be buying. Motherboards, for instance, come in different types, but fortunately, both NZXT H510i and H510 Elite are compatible with the most common motherboard types, namely; ATX, Micro-ATX, Mini-ITX.

The maximum GPU length in these featured NZXT cases is slightly different from one another. If you want more allowance for your GPU or you’re sporting a newer and beefier model, you should look into the NZXT H510i since it has 15.00 in space for the GPU. On the other hand, the H510 Elite can still be considered since it provides 14.51 inches of space.

When thinking about your CPU cooler, the height must always be considered. In this case, however, both products provide the same space of 6.50 in., which leaves no room for comparison.

For content creators and gamers alike, drives are critical, so it’s always a good plus if they can get a case that supports a lot of them or at least has a spacious drive bay. Unfortunately, NZXT H510i and H510 Elite come short for external drive bays as both don’t provide any space for them. However, they make up for it with their internal drive bays that can house 3 x 3.5 in. and 3 x 2.5 inches of drives. Additional drive mounting is also supported by both cases having 2 x 2.5 in. drives in the bottom and 2 x 2.5 inches of drives in the motherboard tray. These specifications are more than enough for casual PC users and even enthusiasts. 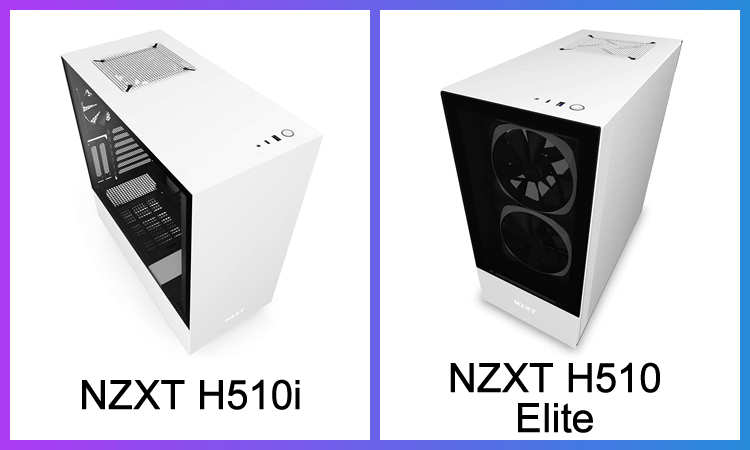 NZXT recognized the importance of cable management and has already been ahead in the market by providing PC cases that are brilliant when it comes to cable management. Since NZXT H510i and H510 Elite are identical units, it’s not a shocker to know that they have the exact cable management dimensions of 0.91 inches. 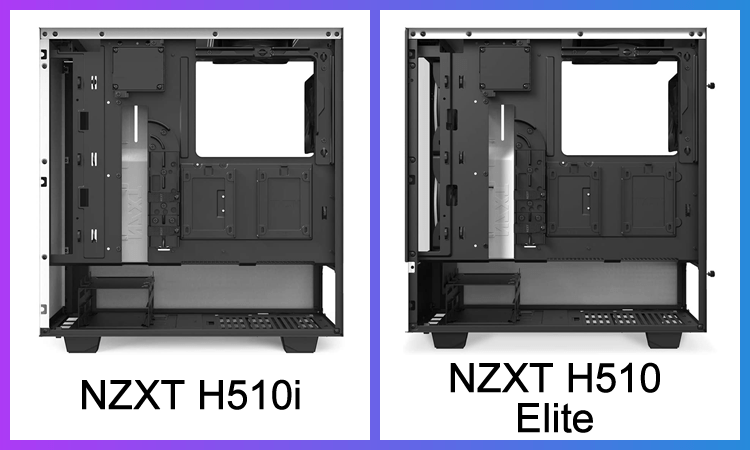 NZXT H510i and H510 Elite are classified as mid-tower PC cases, which means that the space they provide for viewing pleasure is quite spacious. As aforementioned, both cases are made out of steel and tempered glass, allowing anyone to view inside it without any form of hindrances.

You might have to reconsider your choices for RGB enthusiasts out there because neither of these options has built-in lighting.

PC cooling is another PC aspect that people should think about very clearly. We’re not just talking about compatibility here, but also the ability of your chosen cooling kits to perform and aid your machine to be cooler and perform faster.

There are some variations for both PC cases regarding their included fans which is a crucial point of discussion if you want to reduce the materials you will have to buy to assemble your PC. Starting with the H510 Elite, this case has 2 x 140 mm LED front fans included with 1500 variable rpm. For its rear, it has 1 x 120 mm with 1200 variable rpm. For its top side, it features a 1 x 140 mm fan.

NZXT H510i and H510 Elite share the exact dimensions for all radiator sizes, so there’s no argument to be made here on what product is better. The maximum radiator size on the front is 280 mm, while it is 120 mm on the rear. 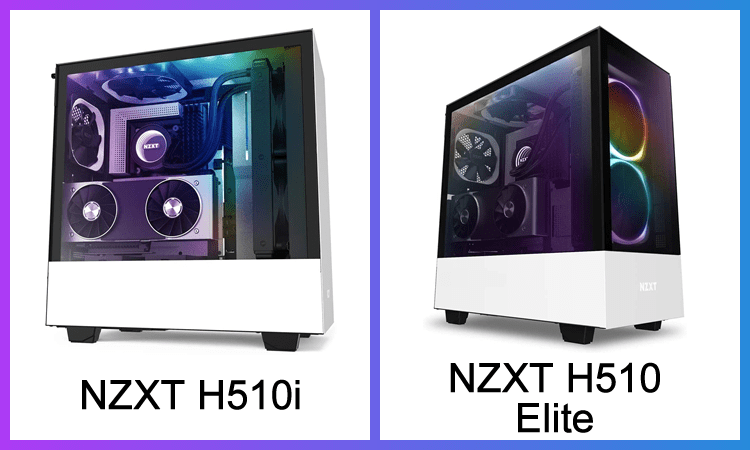 Despite being identical in some functionalities and dimensions, NZXT H510i and H510 Elite are still priced differently. For its “elite” branding, the NZXT H510 Elite is expected to be sold higher, with a price tag of $158.99. This chassis is already solid for its price, and for the fans that are already included, we can say that this is an absolute steal.

The NZXT H510i is a good option for enthusiasts who want to buy third-party fans and those looking for the joys of customization. It is currently priced at $144.99, which is a bit lower than the product we are comparing, which is obviously because of the fans included and some modifications on the space and weight of the product.

It’s time to wrap up this comparison by declaring who’s the winner. Before that, why don’t we run it back for a moment? It’s safe to conclude that NZXT H510i and H510 Elite are of the same breed, but the “elite” branding on the other product truly gives it an edge.

Both cases share the exact measurements of 8.27 in width, 18.11 in height, and 16.85 in width; however, NZXT H510 Elite is a lot beefier with 7.5 kg compared to H510i having only 6.8 kg. The featured cases are also made of steel and tempered glass, which contributes much to their almost identical weight.

NZXT H510 Elite still wins this comparison because of the value it provides to its buyer. It includes fans on the essential parts of the chassis, which eliminates the need for everyone who buys this to look for third-party fans. 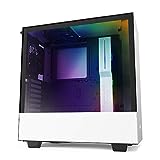 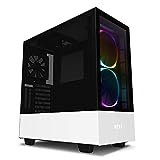