The EVGA CLC 240 and CLC 280 are two CPU coolers that only differ in fan size and thus cooling performance. Except for the fans, both models are identical. Thus, the selection has to be made based on the personal requirements.

Because the EVGA 240 CLC uses a standard 2x120mm radiator, it should be compatible with most dual 120mm case fan mounts. Consumers are often divided when it comes to software control. Others enjoy the opportunity to fine-tune rather than install additional utilities for components that should just operate. EVGA’s Flow Control program, which allows users to customize both the RGB LED and the fan curve, is aimed at the latter group. This unit is compatible with all AMD and/or Intel CPUs.

This unit is compatible with all AMD and/or Intel CPUs, these types of CPUs are one of the most common so you won’t have a problem fitting these into your CPU.

Installation doesn’t get much easier than this, however, if you’re picky, you might claim that EVGA’s solution isn’t the cleanest. Both fans are connected to a split wire that comes from the top of the block, and the three-pin power connection also comes from there. A USB lead connects to the bottom of the block and connects to a motherboard header for software customization, in addition to these two wires. Something to keep in mind if keeping cable clutter to a minimum is a top priority for you. 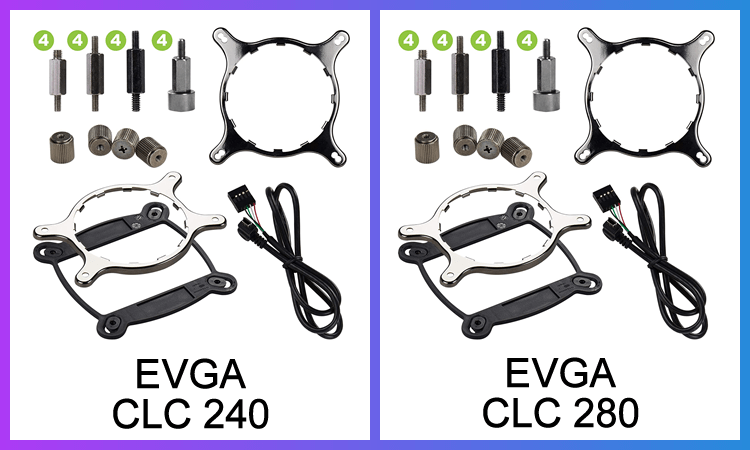 The EVGA CLC 240 has two (2) fans with a size of 140mm. Since it’s larger than its 240 counterpart the fan speed is increased as well, with a fan speed of 600-2200 RPM. Although the max speed is significantly less than the 240, most users won’t even get to that so it doesn’t matter as much.

EVGA’s AIO coolers feature one of the more distinctive looks on the market, thanks to the curved housing of its fans. The cooler also has Teflon Nano Bearing fans, which add to the cooler’s longer lifespan.

These coolers’ CPU blocks are also shaped and designed differently than those of their competitors. The EVGA logo is visible on the block’s top plate, which is transparent. The logo is RGB friendly and may be changed to fit your build’s color scheme using the software that comes with the cooler. To operate the RGB lights via the software, the cooler comes with a USB cable that must be linked from your block to a USB connector on your motherboard.

You may also sync the LED colors of the logo on the block and your graphics card provided you have the correct EVGA video card. This cooler is built on the same Asetek architecture as other high-end closed-loop coolers, with the exception of the unique fan design and CPU block. While it may appear to be distinct from other choices now on the market, its basic design and functioning are largely the same as those of its most popular competitors.

The braided tubing gives the cooler a great aesthetic, but knowing that most high-end closed-loop coolers use braided tubing, it’s not anything that sets EVGA’s units apart. The thermal paste is already put on the copper-based plate on the bottom of the block. However, no additional thermal paste is included, so you will need to purchase a tube of compound if you wish to reinstall the cooler in the future.

The unit has a max noise level of 39.9 dB-A. This means that the EVGA CLC 240 has the capacity to be louder than most. It may be distracting for some, but for hardcore gamers and PC gearheads, this won’t be a problem to fixate on.

The unit has a max noise level of 39.5 dB-A. A little less loud than its 240mm counterpart. Although still louder than most cooler units.

The needed power for the EVGA CLC 240 is only 100 watts, considering that it’s a pretty strong piece of hardware. The EVGA CLC 280 on the other hand, requires a power output of 125 watts.

The 280mm comes with a price tag of just under $130, this choice is best suited to individuals with a significant budget for their next build or those wishing to upgrade their current system to a higher-end cooler. In fact, it’s safe to assume that if you don’t have a budget of at least $1,000 (and, even more realistically, $1,300 or above), you should consider alternative possibilities.

The EVGA CLC 240 is a competent, appealing closed-loop liquid cooler with RGB color capabilities for the pump, but no RGB fans or support. To get the most out of the cooler’s capabilities, you’ll need to use the EVGA Flow Control program for performance, illumination, and fan curve control.

EVGA has added a pair of closed-loop coolers to its lineup, which is meant to provide robust liquid-cooling performance in simple, easy-to-use packaging. The massive 280mm radiator, along with dual 140mm fans and a latest-generation Asetek pump, offer the greatest out-of-the-box cooling performance of any all-in-one system we’ve tested, which is no surprise given EVGA’s appeal to power users.

The 280mm option is definitely the best of the two closed loop coolers EVGA provides in terms of price-to-performance and how it compares to the competitors (based on other benchmarks). However, with a 280mm radiator, not everyone’s chassis will be able to support such a large AIO cooler. 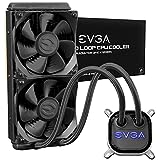 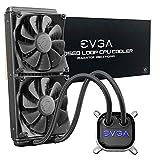