Walkie-talkies are little gadgets that can be pretty useful when operating in places where mobile phone service is limited. Handheld radios are also handy for security workers, event staff, and weather correspondents because of their fast transmission and range capabilities.

With that in mind, we’ll take a look at two popular Motorola walkie-talkies to see which one best meets your needs: the Motorola T200 or the Motorola T400.

To begin, you can use rechargeable or alkaline batteries to power the Motorola T200 and Motorola T400. It’s as simple as plugging in the batteries and pressing the power button to get them going. You can choose from 22 channels in a split second and communicate effortlessly.

The Motorola T200 and T400 additionally include specialized micro-USB chargers, a client’s manual, NiMH rechargeable batteries, and two Motorola radios. To scan and pick a list of channels, use the client’s manual, which is included in the package.

The Motorola T200 has a surprisingly small footprint. Even though Motorola hasn’t given the T200 a waterproof or IP classification, it’s still suitable for normal outdoor and indoor use. The Motorola T200 is ideal for small to medium-scale events, activities, and monitoring.

The Motorola T400 is IP-rated and waterproof so that it can endure rain and snow. It is perfect for weather services due to its durability to various weather conditions, and it comes with a channel dedicated to the National Weather Service.

As a result, customers have constant access to weather forecasts. However, soaking your handheld radios in water is not suggested, as it is for most other walkie-talkies. 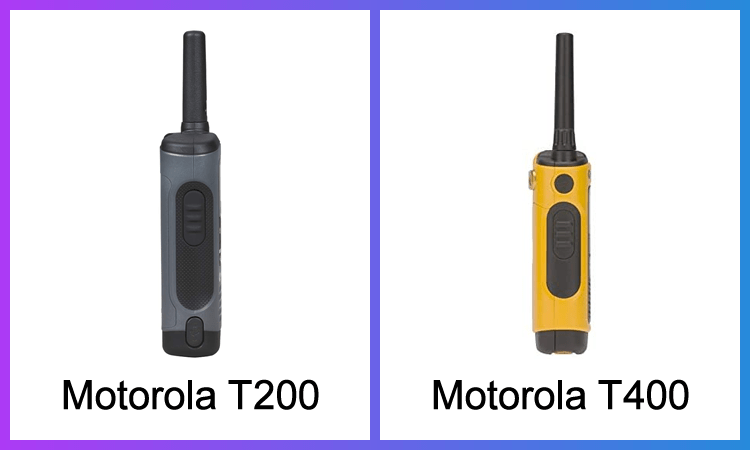 The included NiMH batteries in the T200 can last up to 12 hours. However, alkaline batteries can extend the radio’s life to up to 29 hours. If you use NiMH rechargeable batteries, the T400 will last up to ten hours, but if you use alkaline cells, the battery life will be increased to roughly 26 hours.

If you’re going skiing, camping, hiking, or anything else, bring both AA and NiMH batteries so you can listen to the radio all day.

Both the Motorola T200 and the Motorola T400 have a range of 20 to 50 miles. Keep in mind that frequency range is influenced by noise, topography, weather conditions, buildings, and vegetation.

If you run the Motorola T200 under ideal conditions, such as clear or few impediments along the line of sight and good weather, it can reach up to 20 miles. The radio is also capable of operating in a large, open region.

The Motorola T400’s most notable feature is its ability to go up to 35 miles in ideal conditions. When you’re out on the open water, the radio’s extended power may get you up to six miles. It can supply you with more than two miles of broadcast range if you use it inside the city or urban areas, where concrete buildings surround you.

In an ideal world, both devices would perform flawlessly in an unrestricted environment. However, this isn’t the case for most applications. In loud areas, the real range may vary and is rarely as large as stated in the specifications. This is because the operational range of your gadget is highly dependent on the domain, climate conditions, and deterrents. 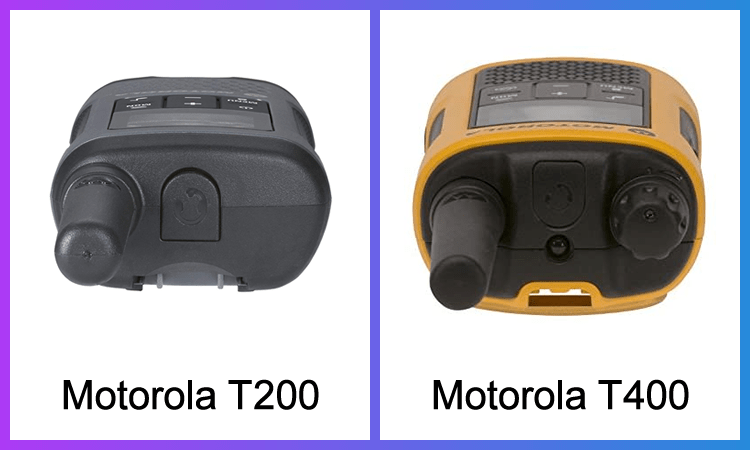 The T400 radio can receive NOAA climate channels, which are critical for accurate weather forecasts and surrounding catastrophes. With the Motorola T200 and T400, you’ll have a private, hands-free network.

Keep in mind that some channels require a Ham Radio License from the Federal Communications Commission (FCC). Channels 1 to 14 are recommended for family viewing and do not require a permit. Channels 15 to 22 are GMRS frequencies, which require a license to tune in to.

For around $39.99, you can get a Motorola T200 two-pack. However, if you require a third radio, some retailers provide three-packs for roughly $70.

Given its additional capabilities, the Motorola T400 costs roughly $60 to $70 for each pair, which is significantly more than the T200 model. The T400 model is more cost-effective than its predecessor based on its costs. Not because it’s more expensive, but because it offers unique qualities that make it worthwhile.

Because of its lightweight and ergonomic design, the Motorola T200 is a good choice for HAM radio amateurs and family use. The Motorola T200’s range capacity allows you to stay in touch with your team.

The T400, on the other hand, should be the more cost-effective gadget if you want a wider range of features and capabilities. It is a superior alternative for outside communication because of its noise filtering and hands-free conversation. A low and high-volume Push-To-Talk button on the Motorola T400 adjusts the loudness of your voice. 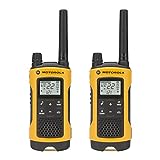