Motorola T503 and Motorola T600 are two of the most reliable walkie-talkies. Both devices have outstanding specifications and features to consider. But which of the two is the better option? This article compares the Motorola T503 and T600 to assist you in making an informed selection.

Let’s start with the Motorola T503, which is really simple to set up. To activate the portable radio, simply place the batteries in the compartment on the back of the device and push MODE for a few seconds. When it’s time to turn it off, do the same thing.

If the battery runs out of juice, recharge it by connecting the cable to the charging port. Before charging the gadget, be sure it is turned off. Adjust the channels, sound level, and other user options when the radio is on to make it fully functioning. Make sure you read the instruction manual that comes with the Motorola T503 carefully.

The setup for the Motorola T600 is likewise quite simple, however, familiarizing yourself with the setting tweaks may take some time. Three AA alkaline batteries are required for this gadget, which must be installed in the battery compartment on the back of the device. To activate (or switch off) the gadget, press and hold the MODE button for a few seconds once the batteries have been fitted.

Meanwhile, the settings aren’t great, and the menu has a limited number of options. But as stated earlier, it can take some time to become used to the UI. It is for this reason that you must read the user handbook before using it outside.

The Motorola T503 is ideal for outdoor use, and you can use it for any water-related activity. It’s well-constructed to withstand water damage. And don’t worry if you drop it in the water; you’ll be able to retrieve it.

Because T503 floats, you won’t have to plunge into the water to recover it. Extreme weather conditions, such as strong rains and typhoons, are not a problem for this portable radio.

The Motorola T600, on the other hand, is IP67 waterproof. It means that you can use it underwater for a maximum of 30 minutes without risking irreversible damage. Waterproofing is provided by the device’s thick plastic-covered body and watertight buttons.

Both types are powered by batteries, although they differ in a few respects. Six AA batteries are required for the T503, which are included in the package. They are rechargeable, although their battery life is only 10 hours. Alkaline batteries, which can last up to 29 hours, can be used to replace them.

The rechargeable batteries may be fully charged in eight hours, but you must unplug the radio after it has completed its charge. If you leave it plugged in for too long, the battery life will quickly deplete.

The former only has a 9-hour battery life and requires an eight-hour charge. Recharging the device now has the advantage of eliminating the need to purchase new batteries on a regular basis. One disadvantage is that the usage period is nearly the same as the recharging time, which is inconvenient.

The latter, on the other hand, has a battery life of 23 hours, which is useful if you don’t have access to electricity. Just make sure you have plenty of spare batteries on hand. The device features a low-battery indicator that lets you know when the batteries are running low.

The T503 has a 35-mile communication range. However, the range isn’t set in stone, and it might fluctuate depending on the location and physical obstacles that may interfere with the signal.

The T600 has a range of 36 miles, which is roughly identical to the T503. However, maximal capacity can only be achieved when there are no distractions. If it can travel six to seven miles in an open region with a variety of physical obstacles, you should be satisfied. 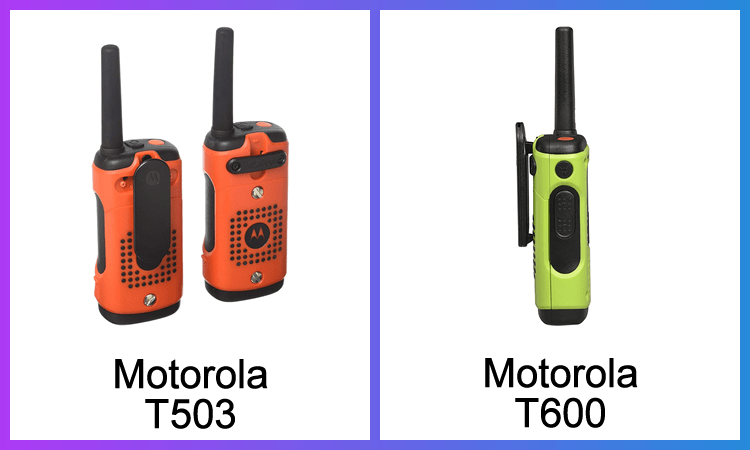 The Motorola T503’s frequency band covers 162.000MHz to 162.550MHz for NOAA or Emergency Frequency, and 462MHz to 467MHz for FRS or GMRS. It has 22 channels and 121 privacy codes in its system. Regardless of model or manufacturer, it can communicate with other GMRs or FRS devices. If you want to use the GMRS frequencies, you’ll need to secure an FCC license.

The Motorola T600, like the T503, uses FRS and GMRS frequencies and has 22 built-in channels. It has the same frequency range as the previous model, which is 462-467MHz. There’s no need to get an FCC license if you’re solely using FRS frequencies. However, intercepting GMRS frequencies, which require a license to access, is another situation.

The Motorola T503 contains 11 weather channels, including seven NOAA frequencies, and a real-time weather update. It has an emergency alert built-in that makes a loud noise when activated. A keypad lock, a lighted display, and 20 various call tones, including a low-battery alarm and a beep for speaker confirmation, are also included.

The T503’s VOX mode, which allows you to use the portable radio hands-free, is one of its best features. You may need to utilize the auxiliary headphones to hear the device’s sounds. This is the gadget for you if you want to be environmentally conscious. It takes pride in its eco-friendly design, which allows it to save energy. When it’s in idle mode, it doesn’t use as much power, so you don’t have to worry about the batteries running out.

The Motorola T600 appears to have more features than the previous model. It has all of the features of T503 except for the Eco-smart design. In addition to the aforementioned capabilities, the T600 boasts a higher level of water resistance and the capacity to float if dropped into water. Simultaneously, it turns on the light, making it easier to locate in the dark.

The T600, of course, includes the VOX function. It has an Auto Squelch feature that can eliminate interference and provide you with clear reception. This model offers a nuisance erase option to ensure that there are no other distractions while delivering your messages to the other side. There’s no reason you can’t hear the person on the other end of the telephone.

The pricing of the two versions differs significantly, and the specifications and features of the devices contribute to this. On Amazon, the Motorola T503 and T600 are currently $59.55 and $82.50, respectively. However, they are likely to be more expensive in other online markets, so make sure to shop around and compare prices before making a buy.

Returning to the pricing justification, the T503 is less expensive than the T600, but it is more expensive than other Motorola models. It simply means that it is of greater quality and is a model worth considering.

However, the T600 is more expensive because it offers more functions than the T503. You can’t take away its ability to float or the fact that it instantly activates the flashlight in an emergency. For most people, this is a significant bonus.

Both products are waterproof and feature the same setup procedure. Their power sources, as well as their range and frequencies, are identical.

Furthermore, if you want to use the GMRS frequencies, you’ll need an FCC license. However, you’ll need to compare the features to see the differences and select which one to purchase.

The Motorola T600 has additional features than the Motorola T503. Although the price is higher, you receive more value for your money because it performs better. However, when you consider it, a high-end walkie-talkie is relatively inexpensive. You’d undoubtedly come across a portable radio of similar quality, but it’s far too pricey and may not be worth it.