Whether your activities are indoors or outside, you and your friends and family will benefit from having an extra buddy walkie-talkie. This handset helps reduce your concern about not receiving a cellular signal.

Connectivity is easier once everyone is out there in the highlands, backpacking, or trekking with a two-way radio. Today, learn which is better among the two models of Motorola.

In this back-to-back comparison of Motorola T200 and Motorola T260, you will know which one to bring.  Allow this review to assist you in comparing these two in terms of product features and functionality.

The T260 is an improved, more advanced version of the T200. This results in the following differences:

In a nutshell, the configuration is the same across the T200 Motorola handset series, like the ones on review — Motorola T200 and T260. It would be as straightforward as;

Unless you are unfamiliar with walkie-talkies, read the user’s handbook, which has all the instructions you want to get started. Have extra time to read and understand it since this will benefit you. Its user handbook also includes a channel and frequency list. Since both devices have minimal controls, you must have no issue.

If you can’t avoid it, use it with extra when engaging in waterfront sports. Remember, don’t ever immerse it in water.

Motorola T200 and Motorola T260 have two power choices available. (1) rechargeable batteries and (2) alkaline batteries. As a result, you may choose to use the walkie-talkie for extended periods. Users have nothing to be anxious about using it beyond the time intended.

The NiMH battery packs included in the Motorola T200 package last 12 hours. And to recharge this, you’ll need to use the included micro USB Recharging Power Adapter.

The T200 model is much like the Motorola T260. Its battery life is fairly limited. However, by integrating the two power sources, you won’t be complaining about having empty power.

However, both the Motorola T260 and T200 packages don’t come with alkaline batteries, so you need to purchase the three (3) required batteries. The ability to utilize these sorts of batteries in any gadget is already a fantastic bargain if you’ll be spending the weekend in an outside setting, given that they last at most 29 hours.

According to the makers, the Motorola T200 can go approximately 20 kilometers in optimal conditions. Optimal circumstances imply that there will be no or few barriers and that the weather is pleasant. Once there are any obstacles in the signal’s path, anticipate it to be difficult to receive connectivity.

The Motorola T260, however, has a wider scope of 25 miles and can be used in both broad fields and highlands or hills. Yet, the range is still influenced by the landscape elevation and other obstacles. Connectivity is also feasible on lakes and rivers. Anticipate it to have a coverage of 6 miles the most, considering these situations. 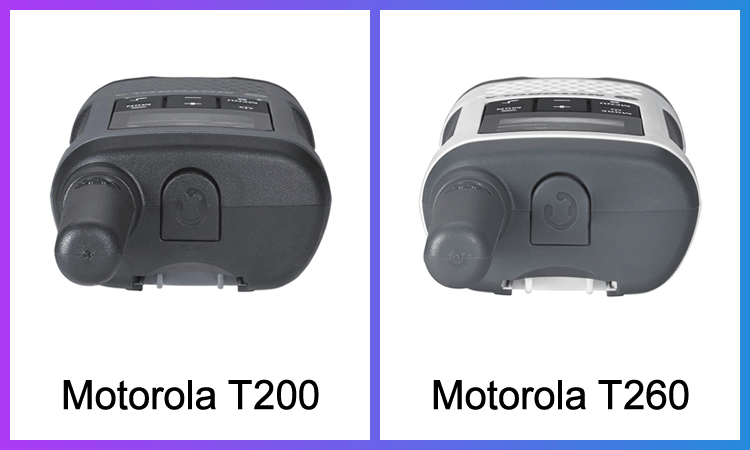 The Motorola T200 will operate if the frequency band is set between 462 – 467. There are 22 channels, each with 121 privacy codes. Since it works with just about any broadcasting, you may use this two-way radio with General Mobile Radio Radio Service (GMRS) or with Family Radio Service (FRS).

Using the Motorola T200 for FRS (within the US), you wouldn’t need a license. Keep in mind, though, that you may only need this within the specified frequencies above.

Inside the United States, using your Motorola T200 outside of certain frequencies could result in fines or other consequences. To wit, access to Channels 8 through 14 are accessible.

However, if you want to use it as GMRS, you must obtain a license first from Federal Communications Commission (FCC). After that, channels 1–7, as well as channels 15–22, are accessible for usage.

Since it is compatible with any transmitter, the Motorola T260 also communicates with the FRS or GMRS channels. Nonetheless, it differs from the Motorola T200, which you should obtain a license whenever you intend to use GMRS.

In terms of the frequency range, this Motorola T260 is comparable to the Motorola T200. It operates in the Ultra High Frequency (UHF) band, and it is perfect for outdoor adventures. Consequently, if you’re constantly out with friends and relatives, these walkie-talkies are for you.

Users would have no difficulty communicating, even in an emergency. The Motorola T200 or Motorola T260 makes it simple to identify channels available. They both contain 22 channels using 121 privacy codes. Every privacy code has a total of 2,662 possible variations.

Users should learn a lot about using walkie-talkies inside the United States. There seem to be legal and unlawful activities.  As a consequence, you must really be informed of them to prevent falling into problems.

Aside from the different privacy combinations available on both devices, Motorola T200 and T260 still have a lot to offer for users. 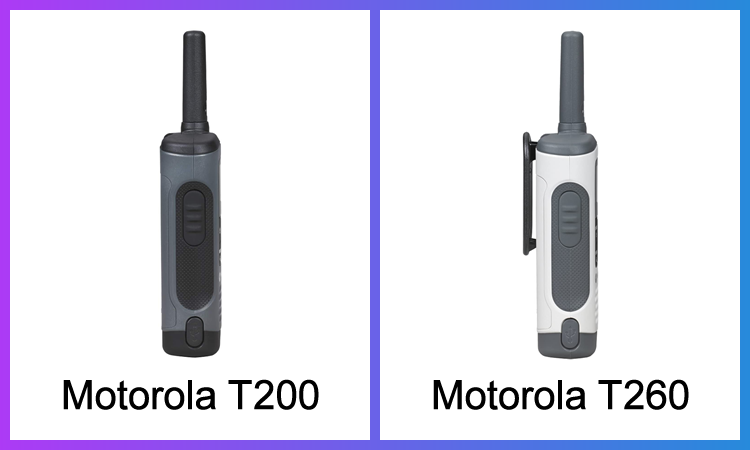 When the price-to-performance ratios are evaluated together, the Motorola T200 is a good deal. It’s trustworthy, and the pricing seems to be in the midway ($38.59).

However, if you’re looking for a decent or perhaps the best-buy, go with the Motorola T260. The features are impressive and at $45.95.  Given its features and functionalities, it is already reasonably priced.

The Motorola T200 and Motorola T260 both have a plethora of functionality. Both have comparable features, which is not unexpected given that they are both from the Motorola T200 series. You may carry them along on your next vacation or camping trip.

Each includes a micro-USB charging connector and is simple to recharge. Each also allows the usage of battery packs for better durability.

If you are a user who enjoys recreational sports, the Motorola T260 is a wiser alternative. It has a greater frequency distance of 25 miles versus the Motorola T200, which only supports 20 miles.

Ultimately, the Motorola T260 features 11 weather channels, and the Motorola T200 does not. With T260, you’ll be aware of the weather ahead of time since it will send you weather updates — a practical and convenient perk, which T200 lacks thereof. 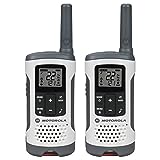