The Logitech G502 and Logitech G703 are high-quality gaming mice. However, there are some differences that you should consider when making your purchase decision. We would like to show you which ones in the following article. For this purpose, we have compared both gaming mice in detail.

The Logitech G502 with HERO Sensor and the Logitech G703 with HERO sensor work similarly, although they are designed differently. The G502 is a huge, hefty mouse with a thumb rest and an ergo-shaped body. It also features a more aggressive gaming aesthetic and much more programmable inputs. The G703, on the other hand, is smaller and lighter, with a streamlined design and half as many buttons.

This mouse’s cord is excellent, and it’s comparable to the cable on the G903 in that it’s flexible and doesn’t have too many kinks. The wire does, however, curl up a little.

With its dedicated receiver, the Logitech G502 LIGHTSPEED connects. The cable may be used to charge your mouse or plugged into the receiver adapter and used as an extension to move the receiver closer to your mouse for improved performance.

The braided cable is of high quality. It’s adaptable and doesn’t have any quirks in it. Although the connector appears to be unique, it is simply a standard micro-USB connector that may be used with any cable. A receiver extension adapter allows you to move the receiver closer to you if your desktop computer is too far away to influence performance. Data is transferred via the connected connection, not wirelessly, while the mouse is plugged in.

Because the Logitech G703 lacks Bluetooth functionality, it can only connect wirelessly via the bundled USB receiver. It comes with a built-in rechargeable battery that may be used while charging. When the RGB lighting is turned on, the battery can last up to 35 hours, and when it is turned off, it can last up to 60 hours. 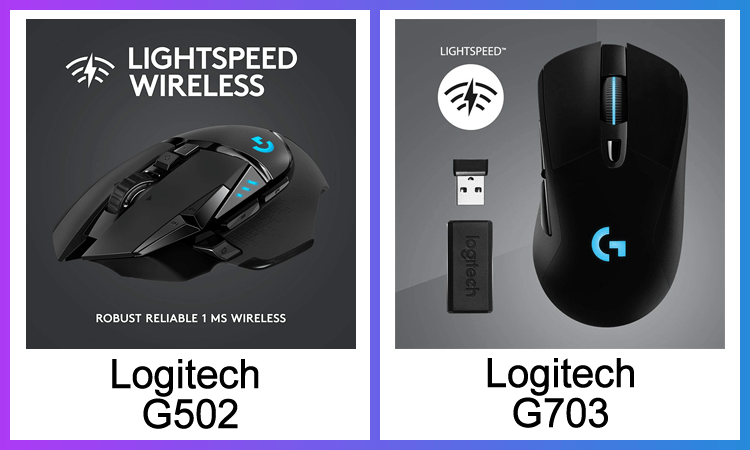 The sensor has a DPI range that may be adjusted in 50-step increments. It’s remarkably constant whether you move the mouse slowly or fast, with almost little variance. Because the sensor’s minimum lift-off distance is so short, it won’t capture your motions when you relocate your mouse. Because of the high polling rate, smooth cursor movements should be possible.

The minimum DPI is 100, while the maximum DPI is 25,600, similar to its G502 counterpart. It has a DPI variation of 2%, with DPI adjustment steps capped at 50. All of the buttons are programmable with G HUB, and you can adjust profiles and DPI settings right on the mouse.

The PTFE feet are satisfactory. They glide smoothly on both a tabletop and a mousepad, although they have sharp edges and are on the thinner side. Extra feet are not provided, although third-party options are available.

Same as the Logitech G502, the Logitech G703’s PTFE feet are also satisfactory. The gliding is smooth on both mousepads and tabletops. Why fix what isn’t broken.

The sensors are also the same as the Logitech G502 technologically and sensor model-wise. 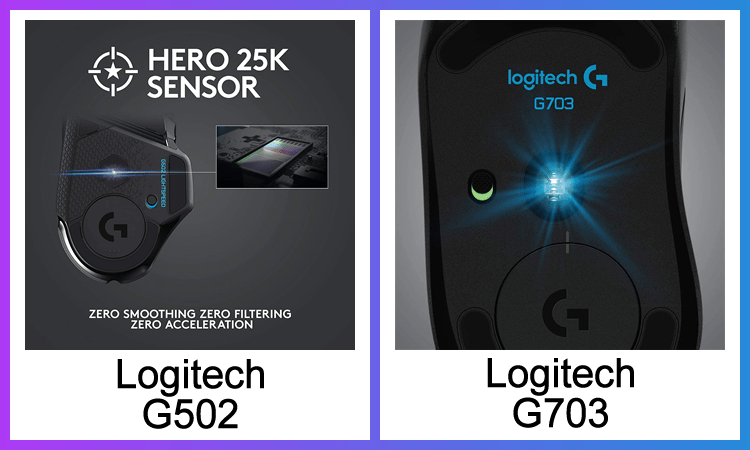 This mouse was designed to be held with a palm grip. Users with smaller hands, however, may have some difficulty getting to the sniper button. Users who prefer using the claw grip with tiny hands may have problems utilizing the sniper button since it is too far to the front of the mouse’s body, similar to the palm grip.

Although this mouse isn’t built for a fingertip grip, it may still be used by individuals with bigger hands. The sniper and CPI-up buttons, on the other hand, may be difficult to use without losing control of the mouse.

The Logitech G703 is a lightweight mouse that is ideal for first-person shooter games. You may even make it heavier by using the provided 10g weight, which is held in place on the mouse’s bottom by a plastic, magnetic cover. If you want the mouse to be lighter, you may remove the complete cover, which will save you 3 grams.

The Logitech G703 LIGHTSPEED features a sophisticated appearance. It has a velvety, matte texture, and the rubber grips on the sides mix in nicely with the rest of the mouse. RGB illumination is incorporated into the logo and scroll wheel, which you can change using the software. Even in a well-lit space, the illumination is noticeable. It doesn’t lean too much on the gamer style so that it won’t appear out of place at the office.

Regardless of hand size, the Logitech G703 is perfect for a palm grip. When employing a claw grip, it might be difficult for persons with tiny hands to reach the scroll wheel and click the buttons due to the mouse’s rather large hump. Unless you have big hands, the Logitech G703 isn’t suitable for a fingertip grip, as the buttons and scroll wheel are difficult to reach for smaller hands.

Except for the mechanical scroll wheel lock, all of the buttons on the Logitech G502 LIGHTSPEED may be programmed. On the left side, there are three buttons, one of which is a sniper, and two more on the primary left click for CPI changes. You may program a G-Shift button that, when pushed, activates another layer of commands, giving you a total of 21 programmable inputs.

The Logitech G HUB software is wonderful and provides for a great deal of personalization, whether you want to customize your lighting or performance settings. You can also save numerous profiles on the mouse and use them on another computer without having to reinstall the program, which is really convenient.

The mouse features two side buttons on the left side, which may not be enough for more serious MMO gamers. You can swap profiles and CPI settings directly on the mouse, and all of the buttons are programmable with G HUB.

The software support for the Logitech G703 is excellent. Customize the two RGB lighting zones, remap buttons, create macros, and tweak performance parameters via Logitech’s G HUB. There’s enough onboard memory to keep your profiles so you can access them even if G HUB isn’t installed.

The Logitech G502 wireless gaming mouse is well-made and comfortable to use. The sensor has a wide range for the CPI, and the configured CPI remains astonishingly consistent no matter how slowly, or quickly you move the mouse. It also has a low click latency and a high max polling rate, resulting in extremely smooth and responsive cursor motions.

Because of its design and thumb rest, the Logitech G502 is likely better suited for a palm grip. Smaller hands, on the other hand, may struggle to use it with any grip style due to its wide bulk. Also, while the accompanying weights can help you optimize its bulk, it’s still rather hefty without them.

The Logitech G703 wireless gaming mouse is an excellent choice. It’s well-made and features a comfortable design that accommodates a wide range of hand sizes. Whether you play wired or wirelessly with its USB receiver, click latency is exceptionally minimal. With a wide CPI range, quick lift-off distance, and high polling rate, the HERO 25k sensor delivers remarkable performance.

The buttons are clicky and pleasant, and they’re fully programmable through the G HUB, which also allows you to change performance parameters and configure the RGB lighting. The scroll wheel is solid. However, it doesn’t accept tilt inputs and can’t be unlocked to swiftly navigate big texts.

There is no clear “winner” when it comes to comparing the two mice. The deciding factor is the users’ preference between the two gaming mice. 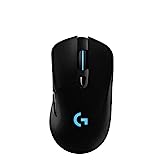