Are you shopping for a cable modem but have no idea which brand and/or model to buy? To help you start on the right foot, let us give you a hint: The best cable modem is the one that offers support for DOCSIS 3.0. Clearly, the list should include these two: Motorola MG7550 and Motorola MG7700. Both are also certified by leaders in cable service, which include Xfinity, Comcast, Cox, and Charter Spectrum.

Now, which between the two is a better choice? We are providing here a comparison of Motorola MG7550 and Motorola MG 7700 in terms of performance, features, ports, and prices to answer this question and to help you come up with a well-informed decision. Read on.

If you are looking for a device that can offer high-speed shared Internet, either cable modem is a good choice as both let you connect to a maximum of 253 wireless and Ethernet devices.

But what makes these two more powerful when it comes to faster, more stable, and better wireless coverage are the AnyBeam and Power Boost technology. For additional speed and range according to the FCC limit, they both carry the Wireless Power Boost technology. Their wireless clients, on the other hand, can enjoy improved performance and range because of the focused support provided by AnyBeam implicit beamforming at 2.4GHz and 5.0GHz. Additionally, they come with the built-in Wi-Fi Gigabit Router, which allows on-board direct connection. However, only the MG7550 works on Wi-Fi DFS frequencies. This feature helps minimize the chance of your Wi-Fi connection interfering with that of your neighbor.  Checking their internal antennas, they have the same number that they are able to provide send and receive channels (three for each). 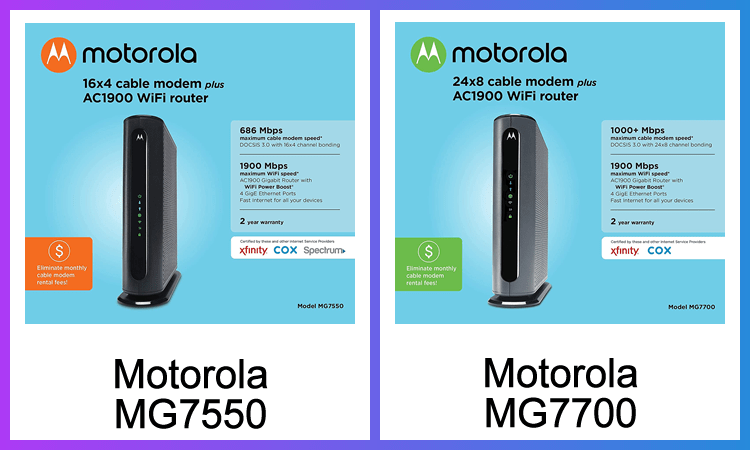 Even in features, Motorola MG7550 and MG7700 are similar. They are compatible with IEEE 802.11 n, ac, g, and b devices, which include computers, smartphones, HDTVs, game stations, and tablets. Basically, you may not encounter any issue when it comes to gadget use as these are common. They also work for IPv4 and IPv6; thus, you are assured of robust, flexible network addressing. Because they are designed as a vertical unit, shelf space is not a problem as it can fit easily. This shape also helps make the wireless performance and cooling better. At the back, they have the power jack, Coax cable connector, WPS, as well as power and reset buttons. However, only the Motorola MG7550 has the WLAN enable and disable function.

For parents who want to make sure that their children get access only to content suitable for them, they can never go wrong choosing between MG7550 and MG7700 because both have built-in parental control capability. They also comprise Configuration Manager that allows context-sensitive help, where users can easily get access to the information they need right from the application; thus, they no longer have to read the user manual.

Each cable modem already comes with a wireless security password, so the setup can be done faster and will not give any trouble. Changing it is a breeze as well, and there’s also the advanced firewall to offer additional security.

Motorola MG7550 and MG7700, which are also alike when it comes to product dimensions (8.6” H x 9.1” x 2.6” W), feature seven status-reporting LEDs. To assure you of a good investment, they also come with power surge circuits and ruggedized lightning.

The similarity of MG7550 and MG7700 continue with ports as they both feature four Gigabit Ethernet LAN ports in case you opt for a wired connection for your tablet, computer, HDTV, or other Ethernet-compatible devices. 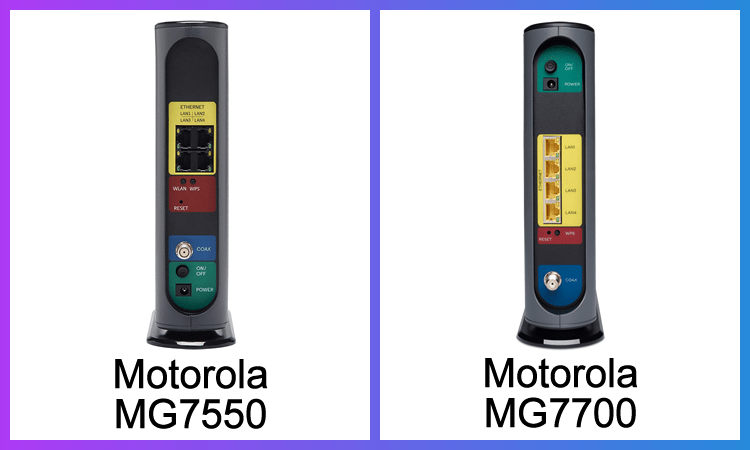 As we compare the two cable modems, we have discovered that they are similar in most specifications, compatibility, and features. So regardless of which cable modem you choose to purchase, you can expect to enjoy almost the same level of speed and performance. If you are concerned then with your budget, you can go for the one that has the much lower price—the MG7550. Otherwise, you can opt to buy the Motorola MG7700 if you firmly believe that products that cost higher tend to be more reliable than those that come cheaper—which is clearly not the case here because, as we said, they are almost the same.

If there’s one specific factor that makes the MG7550 better, it is its ability to work on Wi-Fi DFS frequencies that therefore lessen the vulnerability of your wireless connection to interfere with that of your neighbor.