Wi-Fi connection management in the old days was straightforward. It is true when Wi-Fi connections still have their limits, which we have fortunately have surpassed right now. Netgear’s Nighthawk C7000 and C7000v2 is an excellent testament to that.

These devices are 2-in-1, where they could both act as a router and modem. This freedom has allowed the manufacturer to provide better bandwidth and stable internet connection in a not limiting range. Netgear C7000 and C7000v2 are almost identical to one another, but there are some essential things we have to check first before identifying what the better purchase is. Before we arrive at our conclusion, we must introduce you first to their specifications.

Basically, the two routers C7000 and C7000v2 are almost the same devices. Version 2 is merely an update, i.e. an improved form of the first router. At the same time, the C7000 was taken out of production, as small but important improvements were incorporated by the manufacturer in the v2. Unfortunately, it is not known exactly what these improvements are. However, the v2 is supposed to surpass the C7000 in terms of performance and stability.

Both devices are capable of providing extreme 1.9Gbps speed thanks to their 1.6GHz combined processor. They also have 256 MB of RAM, which is decent for today’s Wi-Fi modems and routers. Specifications like these are perfect for both streaming and gaming, which are both activities that require a lag-free environment.

Netgear C7000 and C7000v2 both have a built-in 24×8 DOCSIS 3.0 channel bonding cable modem which is also responsible for boosting the internet speed by combining multiple channels to increase the amount of traffic it can process at a time. If you’re a COX customer, then one of these devices is an excellent investment as they both support the ISP with a dedicated port with up to 500mbps of speed.

These devices sport a Simultaneous Dual-Band Wi-Fi, which has a very long range of coverage that could go from 1,000 square feet to 2,000 square feet. It is all thanks to their high-powered amplifiers coupled with three dual-band internal antennas.

Performance-wise, Netgear C700 and C7000v2 are strikingly similar to one another. From their Wi-Fi technology, performance, and even offered expected speed; they’re still the same. 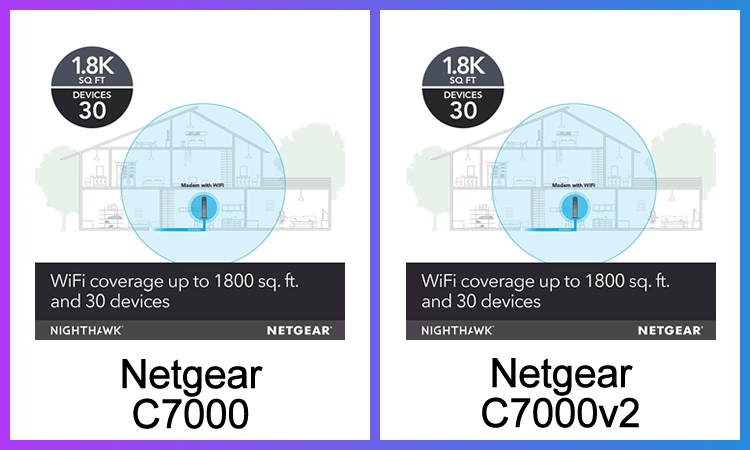 In this part, we’ll talk about the defining features of both products. With Netgear C7000 and C7000v2, it’s possible to set up your FTP server. You’ll have a chance to select your customized URL to make it more personal and secure. If you are having guests over for a day or two, you can take advantage of Netgear C7000’s guest network access, which C7000v2 also has. This feature is perfect for people who value privacy and protection more than anything since it isolates the guest’s devices without having their speed reduced or metered.

Both products also come with the standard WPA/WPA2—PSK, which is relevant for keeping strangers away from your network. Couple that with double firewall protection (SPI and NAT), and you’ll never worry about anyone bypassing or hacking in your Wi-Fi network.

The Denial-of-service (DoS) attack prevention that these devices offer is also one thing to consider. It removes the need for excessive network monitoring and the use of external applications like a VPN. DoS attacks are made to shut down a specific network or render it useless for a couple of moments. It is accomplished through traffic manipulation and overloading the network with unnecessary requests or information.

C7000 and C7000v2 also feature a variety of 24 downstream and eight upstream channels. Wi-Fi channels are essentially smaller frequency bands. Having many choices of channels allows for users to get lesser service disruption and faster internet connectivity. Some channels may have interference in them, and this may coincide with one another. A total of 32 channels might already be overkill, but it is better to have way more than less in this case.

C7000 and C7000v2 have Beamforming+, where you can expect better connection reliability and extended Wi-Fi range more than the standard connections. At this point, there’s no denying that C7000 and C7000v2 are very similar in their performance and key features.

When it comes to their appearance and port placement, everything is also the same. All ports are organized, and all can be found on one side. Whatever device you’ll pick, you can enjoy four LAN Gigabit Ethernet ports ideal for households with many desktop computers and laptops. It can be found on the middle part of the ports and is highlighted with a yellow-colored edge.

Both also feature a USB 2.0 port which isn’t the best USB port at the moment, because USB 3.0 is much better and has more speeds thanks to its nine wires. It can be found on the uppermost part of the ports, just above the 4 LAN Gigabit Ethernet ports, and additionally, you can find the reset button just below. Lastly, both devices also feature a WAN coaxial cable connection. 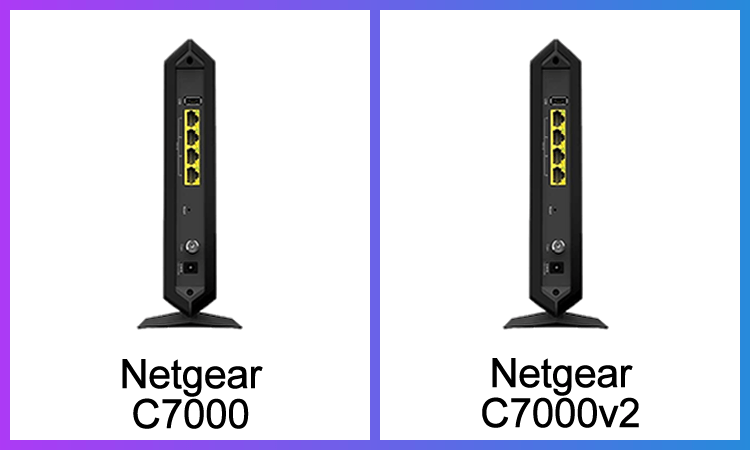 C7000 and C7000v2 may have the same performance and essential features, but they differ in pricing. Since C7000v2 was released after C7000, it is priced higher and would cost around $250 to $300. You can expect this price to be even higher if you purchased on a non-official website or somewhere local. C7000, on the other hand, costs around $150 to $200, which is an excellent steal for its performance and good security features.

We are now nearing the conclusion, and honestly speaking, it is a bit hard to give a final verdict. Since C7000v2 is an upgraded version of the base model, some changes would be made internally or externally to make the product a bit better. Generally, when releasing new versions for existing models, the manufacturer would have initially found some faults with the product. The second version is supposed to fix those faults and ensure that it will have a long lifespan and function the way it is intended. In this case, the C7000v2 is the best one to get as you would have lesser risks of encountering bugs or maybe malfunctions that will only worsen your user experience.

C7000 has a lower price point since it’s an older model, and the manufacturer would like to phase it out as soon as possible. In this case, if you’re well aware of potential performance issues and maybe even bugs, you can go with the C7000 because of how budget-friendly it is. The second version may be a lot more stable, but that comes for a price. You may have a harder time finding the C7000 because retailers would be selling the second version instead.

In conclusion, go with the C7000v2 if you have enough money and you want to make sure that you’re getting the best bang for your buck. If you’re tight on budget but still want to have a modem and router that will perform, C7000 should be your pick. Either way, they’re primarily similar to one another, so whatever you’ll pick, we’re confident that you’ll be happy with your purchase.