Are you tired of looking at too many Wi-Fi devices at home or work? There is a great way to organize them. You can buy a single device that is already built with a router and a modem. Netgear’s Nighthawk® C6900 and C7000 are two of the best router modem combos available on the market.

These models are designed to give you a much faster internet speed and bandwidth than standalone routers and modems. You also do away with the messy cables as they can be wireless, making your house or workplace look neat. But which one should you have? Before making a decision, let’s take a look at their performance, features, and prices.

There are only a few differences between the Netgear C6900 and the C7000. Nevertheless, we would clearly recommend the Netgear C7000. It’s the more affordable model, and it has more features to offer to you. It’s compatible with the Nighthawk app, it has much faster cable internet, and it has a USB port, which the C6900 doesn’t have. The other specifications are similar or identical.

The performance of these two models is almost similar to each other. Powered by a 1.6GHz combined processor, both Netgear C6900 and C7000 are two-in-one cable modems and Wi-Fi routers with a throughput speed of up to 1.9Gbps. If we test them in a real setup, the internet speed can reach as high as 300Mbps, and that’s an excellent performance for long hours of streaming and gaming.

They have a built-in 24×8 DOCSIS 3.0 modem, but C7000 has the channel bonding cable modem, which means it can combine multiple channels to boost the internet traffic that it can support. They are also compatible with COX internet, but C6900 can only reach an internet speed of 150Mbps while 500Mbps for C7000.

With their fast internet speed, you can expect them to have wide coverage. These devices are equipped with three dual-band internal antennas that can provide Wi-Fi connections up to 1800 square feet. It also means that you can connect up to 30 devices without slowing down the internet connection. The main difference between the models is that only the C7000 has Beamforming abilities. With the Beamforming, the C7000 has much better stability even during extreme usage, making it ideal for your HD gaming activities.

Based on their product sheets, Netgear C6900 and C7000 don’t have a lot in common. For one, the Nighthawk app is only featured in Netgear C7000. This app allows you to collect more information about your Wi-Fi. It also allows you to track the internet usage, pause the internet activity of any connected device, as well as monitor and manage all the connected devices through your phone. On the other hand, the C6900 features parental controls that you can use to filter the website content on any connected device.

Aside from those, the C7000 has sharing features like playing your media on devices through the DLNA server and ReadyShare USB for storing files from the router to the USB. The C6900 doesn’t have those features, but it’s still an outstanding router modem for your home. Both of them don’t support VPN either, and there is no information about their working modes and supporting protocols.

Despite the differences in their features, both C6900 and C7000 are easy to set up and use. It only takes a few minutes to assemble and configure the device. Once the installation is complete, you need to push a button, then connect your devices to the router modem.

Best of all, they can amplify Wi-Fi connections up to 1.9Gbps, which is very good if you love to play online games and stream online content. Thanks to the internal antennas, their Wi-Fi range is also outstanding, providing internet coverage up to 1800 square feet. Furthermore, they feature 24×8 channel bonding (24 downstream and eight upstream channels) to prevent internet traffic congestion during peak hours. You can still enjoy up to 960Mbps download speed even if many people are using Wi-Fi at the same time.

The features are not the only things that set the router modems apart from each other. There is a big difference in terms of their ports. Since they are a combination of wireless router and modem, the Netgear C6900 and C7000 don’t have the WAN port. You can directly connect or configure the router modem to your internet source. Although the WAN port is absent, they both have four Gigabit Ethernet ports that can either have 10, 100, or 1000 Mbps internet speeds.

They also have a COAX port for connecting coaxial cables when you want to connect the router modem to an electrical source. Between the two, however, only the C7000 has a USB port beside the LAN ports. The C6900 doesn’t have one, so you can’t transfer any data from the router modem to the USB or any connected device. 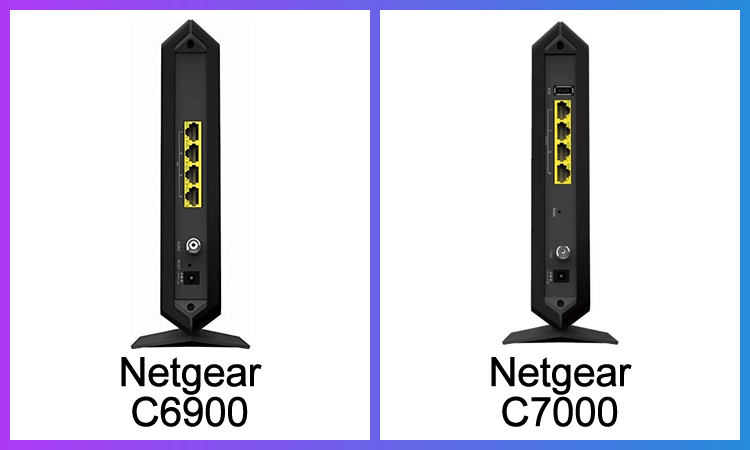 An important part of this article, the price is one of the important things you need to consider when choosing a router-modem device. With that in mind, it’s important to note that the prices of C6900 and C7000 are not a joke. Because they boast of having high performance, they belong in the expensive category, ranging from $210 to $280 apiece. The Netgear C6900 costs around $275 to $280, while the price of C7000 ranges from $210 to $240. It doesn’t seem right, does it?

If we go back to the performance and features of both models, we can say that C7000 has more to offer than C6900. But C6900 is more expensive than C7000. So, if you base your decision on the price, then the best choice is definitely the C7000. You’re paying less for more, which is unusual. Most of the time, devices that have many sophisticated features cost a lot more expensive than others. But Netgear C6900 and C7000 are an exception.

Choosing between the router-modem models depends on your budget because they are really expensive. Both are great for extreme online gaming and streaming, and they are reliable when it comes to Wi-Fi coverage. Plus, they are wireless, so you don’t have to worry about the cables lying on the floor. And if you have a lot of gadgets at home, one of these router-modem combos is already good enough to provide an internet connection for the entire household.

But if we have to choose which one we recommend, there is no doubt that the winner is C7000. It’s the more affordable model, and it has more features to offer to you. It’s compatible with the Nighthawk app, it has much faster cable internet, and it has a USB port, which the C6900 doesn’t have. It even has a higher rating in many online reviews. But if you long for something simple, and you don’t mind paying a high price, then, by all means, opt for the Netgear C6900. Either way, you still get an excellent and durable device for you and your family.