Router modem combos are taking over the market these days, with many manufacturers releasing and improving their models as soon as possible. Netgear is one brand that delivers high-quality products designed to boost internet speed and stabilize bandwidth.

Netgear C6300 and C7000 are two models that can be considered the best in the market, but of course, you can’t have two of them; you must choose one that truly fits your needs. To help you conclude, we’ll run some comparisons of both devices’ specifications and prices.

There is only one major difference in both devices: The Netgear C6300 is slightly slower than the Netgear C7000 (1750 Mbps vs. 1900 Mbps). Everything else is pretty similar.

Netgear C6300 and C7000 can perform excellently to what is promised by the manufacturers. They might differ in speed since an unspecified Puma 6 Processor powers Netgear C6300. However, since Intel makes it, we can assume that its performance is similar to the benchmark or may even exceed it. The Netgear C700, on the other hand, has a 1.6GHz combined processor that boosts wireless, wired, and WAN-to-LAN connections.

Both devices are also equipped with DOCSIS® 3.0, miles ahead of its 2.0 version. However, they have some differences when it comes to channel bonding, as Netgear C6300 has the 16×4 variant, which provides speeds of up to 680Mbps. The C700 model, on the other hand, has 24×8 channel bonding, which is superior for providing up to 960Mbps.

Modern modem routers are built to cover large areas, making them perfect devices for large households. Owners looking to increase their Wi-Fi coverage without reducing the speeds would be happy to try out the Netgear C6300 as it has a pre-installed antenna. The C7000 also delivers when it comes to coverage as it has three dual-band internal antennas installed and high-quality amplifiers.

Netgear C700 takes more advantage since it has Beamforming+ included, which is crucial for keeping the connection stable for multiple devices while still boosting speeds without lowering the coverage area.

Netgear C6300 and C7000 may have different power ranges and capabilities, but the same manufacturer still makes them, so you can expect them to have almost the same features. For instance, they are compatible with the Nighthawk app, which manages devices, subscriptions, and performs speed tests. Through the Nighthawk app, you can easily monitor and even limit specific devices, which is perfect for parents as they can easily control their children’s online activity without being too upfront with it.

These days, internet service providers have been advertising gigabit speeds to their clients. If you’re one of those that have availed of this upgrade, these products are totally for you. They are built with gigabit speeds in mind, whether wired or not. It doesn’t just affect the download and upload speed of your whole setup, but it could also potentially end all the lags and delays that you may experience while gaming or streaming.

Both products are also the same regarding the security they can provide since they utilize the 128-bit AES encryption with PSK. Such encryption is already enough for today’s standards, and even more than that is already considered overkill.

With the aforementioned channel bonding, Wi-Fi modem routers like these two can flawlessly control traffic flow. In this case, however, the Netgear C7000 model provides more value as it has the 24×8 channel bonding variant. The C700 is ideal for bigger households, typically those with ten or more persons. Lower than that, the 16×4 of the Netgear C6300 is more than enough.

Netgear C6300 and C7000 are identical to one another regarding the side where their ports are. Both products have four 10/100/1000Mbps Gigabit Ethernet ports. Having four ports reserved just for the ethernet is already a generous gesture from Netgear, but this is a perfect case for people that mainly use a desktop or those that will utilize the full speed of the modem router without using the Wi-Fi.

Netgear C6300 and C7000 also share the same USB 2.0 port which is not the latest variation of such technology. While there’s already 3.0 in the market, it doesn’t matter that much when talking about modem routers since you won’t need insane transfer and write speed. The USB 2.0 port is more than enough for personalizing your modem router by setting up FTP servers or even storing several files in it.

Lastly, both of them support only one WAN coaxial cable connection. It is fair in this case since even modern modem routers don’t overemphasize this feature. 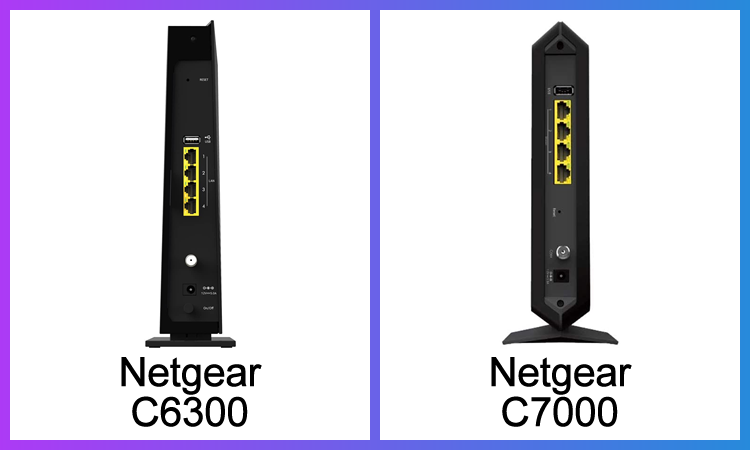 Netgear C6300 and C7000 may feature a lot of similarities with one another, but they’re still different performing devices that work in specific scenarios. Both products are already considered expensive for modem routers, so choosing one over the other is totally a big deal.

The Netgear C6300 is currently priced at $189.99, a fair investment considering how many ports and the single WAN connection it has. It also has a very stylish look with a unique black coating.

The Netgear C7000 has a price tag of $209.99, which gives these products a $20 difference. For this price, you can say that the C7000 is a massive leap from the C6300 because it features not only Beamforming+ but also has a better channel bonding of 24×8. We can quickly see how Netgear cut some expenses to have this price come to life by simplifying the product’s look, starting from its front appearance and the sides.

Performance-wise, it’s easy to pick who the winner is in this comparison. The Netgear C7000 towers over the C6300 regarding the speed and coverage it can provide. It is thanks to Beamforming+ and the difference in channel bonding where C6300 only provides 16×4. You can argue that it may be enough for smaller households, but it still has some performance issues when the network starts experiencing congestion.

It’s also worth noting that the Netgear C7000 is equipped with three built-in dual-band antennas, which makes this a great choice for households that have many rooms and available space.

The price difference is also minimal, amounting to only $20. Our judgment could have been different if that surpassed at least $50 to $100. Since it’s not the case, the clear winner for the performance factor is C7000.

The C6300 is miles ahead of the C700, at least for us, when it comes to build and appeal. The beefy and stylish looks it offers make it a good display inside homes with specific design themes. Not to mention that it is also colored black, which goes along with typical color schemes.

There’s no more area to compare these two products, so it’s now time to choose an overall winner. The Netgear C7000 offers way more performance boost for just $20, which the appearance can’t certainly make up for. The C6300 has its potential and is an excellent device to pick for smaller households. We can still recommend it that way, but be sure that you get it while it’s on sale since the current pricing that it holds isn’t worth what it can give, performance-wise.