Do you feel like you’re not getting the most out of your internet service? Or does it appear to be extremely slow? Upgrading to a newer router will advantage your network. It will improve Wi-Fi range, signal, and overall internet management.

If you are hesitant to purchase a new one because it appears to be expensive, don’t worry because many inexpensive wireless routers are on the market.

TP-LINK is the world’s leading manufacturer of consumer-grade network devices. They offer a variety of products that can all provide a fast and stable Wi-Fi connection for your entire home. From routers and modems to extenders and wireless access points, we have it all. Of course, there’s something for everyone’s budget.

The TP-Link Archer A7 and Archer A9 are two reasonably priced yet excellent performance wireless routers. To know which the better option for you is, here’s a comparison between the two.

Comparison – TP-LINK Archer A7 vs. A9

Wi-Fi is the norm these days, and it’s almost a requirement. As a result, having a good consistent connection is advantageous. Knowing the performance of a wireless internet connection helps determine a good one.

Because the A7 and A9 are dedicated routers, it is critical to understand the wireless bandwidth they can support. Furthermore, it is also essential to know their antenna configuration, Wi-Fi coverage, and other factors that may affect internet reliability.

The Archer A7 dual-band router is powered by a Qualcomm Atheros QCA9563 Wi-Fi chip with a 750-MHz processor and 128 MB of RAM on the inside. The device’s settings and firmware are stored in 16 MB of flash storage.

As for the Archer A9 has more recent hardware, such as 128 MB of RAM and a Qualcomm QCN5502 Quad-Core chipset. As a result, it is better at handling a large number of Wi-Fi connections and maintaining network stability.

On the other hand, the Archer A9 is a router that supports AC1900. That is, it can handle up to 1900 Mbps of bandwidth. That’s the total of the two wireless bands combined. It is divided into 1,300 Mbps at 5 GHz and 600 Mbps at 2.4 GHz. This is usually more than enough for any family.

Fortunately, the Archer A7 and Archer A9 both have extensive Wi-Fi coverage.

The Archer A7 can cover an area of up to 2,500 square feet. That is, it will not have difficulty with three-bedroom houses. If you live in a larger home, you’ll be pleased to learn that the Archer A7 is compatible with TP-OneMesh Link’s technology. Your Wi-Fi signal will be amplified with the help of TP-Link Wi-Fi repeaters.

The Archer A9, like the A7, can accommodate three-bedroom houses. The A9, on the other hand, does not officially support OneMesh technology. According to reports, TP-Link intends to make the Archer A9 OneMesh compatible. Regardless, the Archer A9 is capable of covering a large area.

Both the Archer A7 and Archer A9 have many features that can be used to improve their performance.

The Archer A7 uses standard WPA-2 encryption but cannot prevent malware from crossing the network. However, it can defend a network against Denial of Service attacks and block sites on a blacklist. It supports IPv4 and IPv6 and includes a Network Address Translation firewall.

The Archer A9 has more features that the A7 does not have to help with connection and reliability. For starters, it has beamforming technology, which aids in directing Wi-Fi signals directly to your devices.

Second, unlike the A7 model, the Archer A9 supports MU-MIMO. MU-MIMO essentially increases the efficiency of network transfer and communication. It establishes a more balanced connection between your devices and the router. This means that you can get much faster internet speeds when you use multiple devices at the same time.

Finally, there’s the encryption, which is generally pretty standard, with WPA and WPA2 options. WPA2 is the most widely used security protocol. However, this router also supports WPA3, which is an improved version of WPA2.

View the Archer A9 on Amazon

The Archer A7 has ten discrete green LED icons on the front that display power and activity on the 2.4- and 5-GHz channels, as well as the status of the internet connection and Ethernet ports. There are also icons for the USB port and whether you’re using the Wi-Fi Protected Setup (WPS) feature of the system for quick connections.

The back of the Archer A7 has the expected Ethernet input and four downstream Ethernet ports, all of which are rated at a gigabit per second top speed. The USB 2.0 connector can be used to share a hard drive or a printer; the Archer A7 supports a wide range of popular printers from manufacturers such as Brother, Canon, Epson, and HP.

On the other hand, the A9 has gigabit Ethernet ports for wired devices (4 LAN and 1 WAN). A USB 2.0 port supports the NTFS, exFAT, HFS+, and FAT32 file systems, allowing you to connect a shared external hard drive to your network. FTP server and media server functions are also supported by the router.

View the Archer A9 on Amazon

The TP-Link Archer A7 is less expensive than its competitor due to a lack of features. The cost is $64.99. Its lower price will attract more customers.

Because of its additional features, the Archer A9 is more expensive. It is approximately $89.99. The price difference can be justified solely on the basis of MU-MIMO. This option will provide you with a more stable and faster internet connection.

Conclusion – TP-LINK Archer A7 vs A9

To sum up this review, although the TP-Link Archer A7 is not the fastest, largest, or most powerful router available, its low price can entice customers, making it one of the best router bargains available.

Despite its limited range, the Archer A7 should be adequate for a small to medium-sized home, and it includes parental controls, Quality of Service (QoS) software, and the ability to detect online attacks. The Archer A7’s two-year warranty is the icing on the cake.

Overall, the TP-LINK Archer A9 is an excellent router. It has more than adequate wireless coverage and excellent performance, especially given the price.

In addition, this mid-range router has a slew of one-of-a-kind features — for example, Alexa voice control and the new WPA3 security protocol.

As you can see, both the Archer A7 and Archer A9 are excellent choices for your next wireless router. Based on their differences, you can conclude that the TP-Link Archer A9 is superior in every way. However, if you are on a tight budget, you can settle for the Archer A7, which still provides adequate performance. 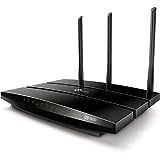