From smartphones laptops to electronic gadgets, Samsung has proven itself to be a reliable manufacturer of tech devices. Two of its outstanding products are the X5 and T7 portable SSDs.

The X5 and T7 have similar specifications that allow them to store large files within a few minutes. They differ in some ways, and their differences make them stand out from other portable SSD models today. For your convenience, this article compares the X5 and T7 and will help you make an informed decision when choosing between the two SSDs.

The X5 belongs to Samsung’s extremely powerful series, whereas the T7 only belongs to the “normal” SSDs. Accordingly, the Samsung X5 is much faster when it comes to reading and writing. In addition, the connection of the X5 is faster than that of the T7. In return, the Samsung T7 is much more handy, but also cheaper than the Samsung X5.

These two sophisticated portable SSDs are available in three size options: 500GB, 1TB, and 2TB. However, each size option of the T7 comes in three colors, and these are Indigo Blue, Metallic Red, and Titan Gray. The X5, on the other hand, is gray on one side and red on the other.

When one device is bigger, it is also heavier than the other most of the time. Case in point, the X5 is heavier than the T7. The former weighs 5.29 ounces, while the latter only weighs 2.05 ounces. But the exact weight of the portable devices may vary, depending on the storage capacity.

To make a portable SSD work, you need to connect it to a host device like a computer or a smart TV. It’s an external storage device, so you basically transfer files to it. With that said, the connection between the host device and the portable SSD refers to the USB interface. And portable SSDs will work at their best when they are connected to their most compatible USB ports.

The X5 is compatible with the Thunderbolt™ 3, which has an incredible speed of 40 Gbps. You can connect it to Windows and Macs PCs with a Thunderbolt™ 3 port, as well as devices running on macOS Sierra or higher and Windows 10 64bit or higher. Furthermore, the X5 doesn’t feature backward compatibility, which means it doesn’t work on typical USB ports.

Meanwhile, the T7 works best with a USB 3.2 Gen 2 with a speed of 10 Gbps. It’s compatible with Windows 7 or higher, macOS X 10.10 or higher, and Android Lollipop or higher. The T7’s speed is not as fast as the X5’s, but it features backward compatibility. You can connect this portable SSD to devices with older USB versions, but expect the speed to become slower, which can be frustrating. 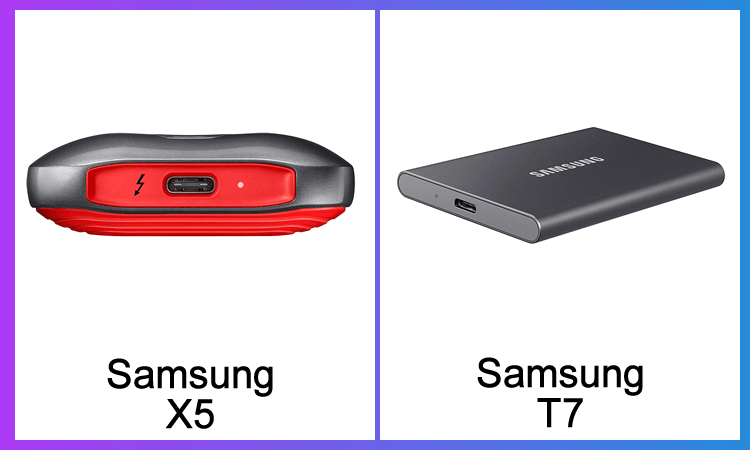 View the T7 on Amazon

When it comes to the portable SSD’s speed performance, it involves the read (transfer) and write (storage/saving) speeds. The sequential read speed of the X5 can reach up to 2.8 Gbps, while the maximum sequential write is 2.3 Gbps. However, the 500GB X5 only has a maximum write speed of 2.1 Gbps.

For the T7, the maximum sequential read and write speeds are 1.05 Gbps and 1 Gbps, respectively. Without a doubt, the X5 is much faster than the T7. But it’s important to remember that you can only experience these speed performances if you connect them to their most compatible USB interface.

One of the best things about portable SSDs today is their security features. They are built to ensure that your files in the external drive are protected. The Samsung X5 and T7 are equipped with the company’s security software and other top-notch features.

Both X5 and  T7 have the same encryption. They are built with the AES 256-bit hardware. Aside from their impenetrable encryption, you can also set up password protection, which makes it more difficult for others to access your files.

To assure the users of safe usage, the portable SSDs have passed and complied with international regulations and requirements. The Samsung X5 and T7 are stamped with several certifications, and these are the following:

Since they are not built with touch screens, the X5 and T7 don’t feature any fingerprint recognition. The SSD model that has this security feature is the Samsung T7 Touch.

The X5 and T7 are manufactured to survive a drop of up to 6.56 feet. However, the X5 is enhanced with durable parts that make it more rugged and compact. It has a protection guard that can absorb hard impacts from drops and a heat sink that keeps the device’s surface temperature below 113°F. At the same time, the X5 and T7 are also equipped with Dynamic Thermal Guard technology to help maintain the performance and temperature of the SSDs.

The X5 and T7 don’t have a dust and waterproof rating, so there is no way to determine their water and dust tolerance. With that said, it is best to keep them away from water and avoid placing them in open spaces where they can get a lot of dust. 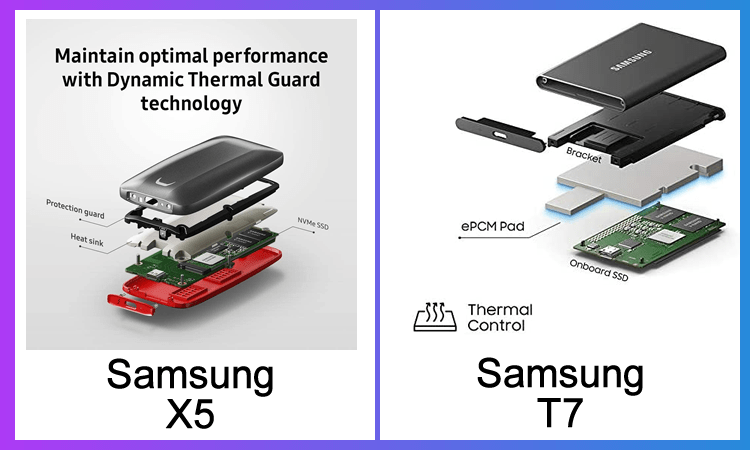 View the T7 on Amazon

Let’s talk about the prices of both portable SSDs. From the specifications mentioned above, we can already tell that the X5 is more expensive than the T7. But how much do they cost?

The least price of the Samsung X5 is $265. It becomes more expensive, depending on the size of the storage capacity — for instance, the 1TB X5 is around $430. Meanwhile, the Samsung T7 costs around $80, which is the price of the 500GB SSD. Like the X5, the price gets higher if you buy the drive with a bigger storage capacity. As you can see, the price difference is really big, but it’s reasonable due to X5’s advanced features and specifications.

Between the X5 and the T7, there is no doubt that the best choice is the X5. It’s bigger and looks more sophisticated than the T7. It also has better internal components that make the SSD more durable than other portable SSDs. Best of all, it has really fast read and write speeds compared to the T7. Yes, it’s expensive, but you get your money’s worth with its features.

But just because the X5 is the best choice, it doesn’t mean that the T7 is no good. If you’re on a tight budget, the T7 is actually a great portable SSD. It’s much cheaper than the X5, but it’s a high-quality device for external storage needs.