Portable storage has never been in demand like it is right now. With many manufacturers perfecting how to approach these peripherals, commercial access has risen, and now everyone has a shot of owning even 2TB of storage that is truly portable. Years ago, we would only settle for HDDs for portability, but those days are over. With Samsung leading the charge, portable storage feels like a dream come true.

If you have to decide between the Samsung T5 and the Samsung X5, the following article will help you. We compared both SSDs and want to tell you which one you should choose.

The Samsung X5 is considerably faster than the T5. This is reflected in the read and write speed, but also in the USB connection. This is also reflected in the price: The X5 costs a multiple of the T5. For normal use, the T5 is usually sufficient. Only if you need a very high speed, we can recommend the X5.

The Samsung T5 comes in different capacities; 250 GB, 500 GB, 1 TB, and 2 TB. The 500 GB they are releasing is additional from the others with its Alluring Blue motif. The same goes with the 2 TB variant, but it is covered in Deep Black in this case.

Samsung’s X5 has less capacity when compared with the T5. It only has 500 GB, 1 TB, and 2 TB available, which means that those looking for budget-friendly purchases would have to ditch the X5. The product doesn’t have any variations in color or appearance, which is a bit of a letdown for people who want to customize their portable loadout.

Samsung T5 and X5 are from the same manufacturer, but they are from two different series, which means that you will see a lot of differences in this article, and we’ll have some good discussions at the end. The Samsung T5 is a bit smaller in appearance, with dimensions of 2.91 x 2.25 x 0.41 in. and a weight of 0.11 lbs. 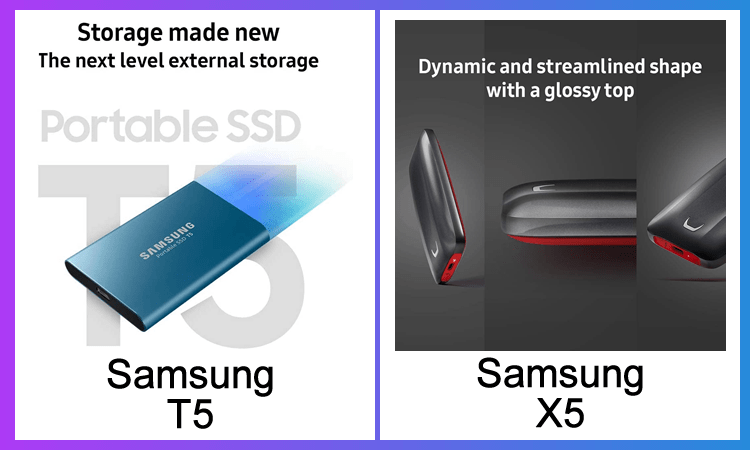 The two products that we are reviewing are basically from two different generations. Since T5 came first, it is expected to be slower, but this doesn’t mean that it is entirely obsolete. It uses the interface of USB 3.1 Gen2 and is also programmed to have backward compatibility. It could reach speeds of up to 10 Gbps, which isn’t that of a big deal right now compared to the release frame of the T5 model.

The next is the Samsung X5, which is far better than the T5 in terms of raw speed and interface. It’s powered by Thunderbolt 3, which is supposed to reach speeds of up to 40 Gbps. Something crazy like this would stay for years to come, which means that X5 is a worthy investment as it somehow is future-proof.

According to Samsung’s official website, the T5 can reach speeds of up to 540MB/s, which is an awe-inspiring feat and would still be needed today.

For its sequential read speed, the X5 boasts a maximum of 2,800 MB/s which isn’t that far with its write speed of up to 2,300 MB/s. The X5 achieved such speeds because of the NVMe integration, generally allotted to mainboard SSDs. 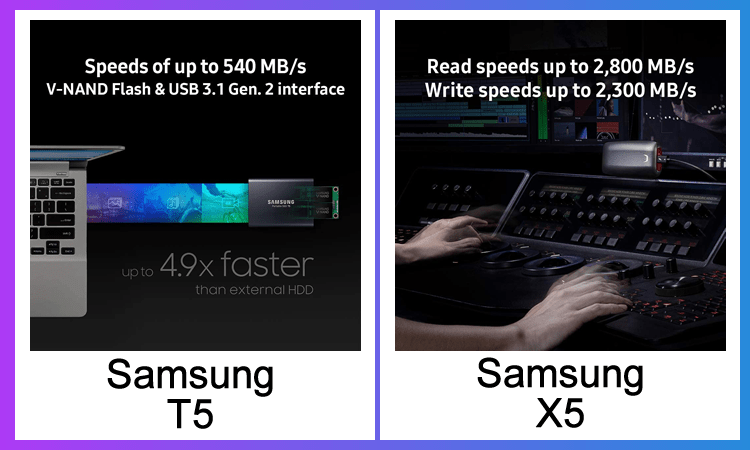 The T5 model has password protection when linked to a laptop, PC, or mobile device. Aside from that, there’s a dedicated software that Samsung has brewed for their storage solutions. Thankfully, this model got it and functions as a plug-and-play feature. With this in mind, T5 is a highly secured product that can’t get easily cracked. Despite its size, the Samsung T5 is formidable storage that could withstand a lot of pressure, impact, and it is also shock resistant.

Certifications for Samsung’s T5 are as follows:

X5 is a product that means leaving a statement that NVMe SSDs can also reach the mainstream portable storage category. With this in mind, Samsung has ensured that it is secured enough to go toe-to-toe with the other manufacturers’ flagship storage. Almost all are the same with the T5 model; integrated software, password protection, shock resistance, and good encryption. However, since it’s a beefier product, it has a heatsink and a protection guard material.

Certifications for Samsung’s X5 are as follows:

Unfortunately, neither of these two products is waterproof or dustproof, but at least Samsung made efforts to have them sustain falls and any physical shock. As fancy as it sounds, there’s also no fingerprint functionality installed on any bot products. It would be possible, but in return, the prices would skyrocket.

Prices for both products are a bit hard to monitor since stocks are quickly depleted. Hence, only some data is available on Amazon and other online shopping stores. As for Samsung’s T5, its 1TB variant costs $109.99, while the 2TB would cost you $199.99. X5, Samsung’s NVMe portable storage offering, has two variants available for sale. The 500GB one costs $265, and the 1TB is priced at $429.49.

With all the specs that we mentioned, it’s only apparent that the X5 would have a very steep price tag. Even though many people may raise their eyebrows, we think that the price tag is justified since it’s NVMe technology we’re talking about, and what’s best is that it’s portable.

For the performance alone, we could already decide who’s the winner. Samsung’s X5 towers above the T5 when it comes to sheer speed. The NVMe technology did pay off, and although it might be a lot bigger than the usual portable SSDs, it still doesn’t matter since anyone could carry it anywhere with only 0.33 lbs.

The Thunderbolt 3 interface is also something we would like to point out. Although practically newer, we could assume that more devices would come with interfaces such as this, so X5 is a good purchase.

With an impressive write speed of 2,300 MB/s, the X5 will indeed be enough for professionals that are always on the go. Depending on the size, copying media files using this beast would only take minutes or even seconds.

With its performance, of course, comes the prize and $429.49 for a 1TB variant; not many people would be happy upon hearing that. That’s why we say and suggest that you get the T5 model if you don’t need the extreme speeds that the X5 is offering. It’s a lot cheaper, and many devices nowadays are still using its interface, which means you won’t be missing a lot.