While HDDs have dominated the market for decades, it seems like their performance is overshadowed by the demand for newer software and PC components. No PC or mobile phone would function without storage. Fortunately, we have SSDs, which stand for a solid-state drive. Instead of having mechanical internal parts, SSDs store memory on flash memory chips.

Even though SSD is lightyears ahead of HDD in terms of performance, many people still prefer the latter because of pricing and size restrictions. That said if you’re considering getting an SSD, specifically a portable one, you should be thinking before making this big purchase. If you’re still undecided, this article might be of help.

Samsung is a well-known manufacturer of mobile phones, but did you know that they’re also prominent in the memory and storage industry? Their T3 and T5 lightweight, portable SSD models are a fantastic display of their capabilities as a manufacturer. Today’s comparison article will try to uncover what’s a better buy amongst these two products.

The Samsung T5 is the successor of the old Samsung T3. Accordingly, both SSDs are very similar and have only a few differences. The biggest difference is that the T5 has a slightly faster USB connection and read and write speeds. In addition, the T5 comes in a wider range of colors than the T3.

The Samsung T3 model is available in three different capacities, 250 GB, 500 GB, 1 TB, and 2 TB. The same goes for the T5 model; however, some more variations are worth discussing. T5 features a 500 GB alluring blue variant and also a 2 TB that is painted with deep black. 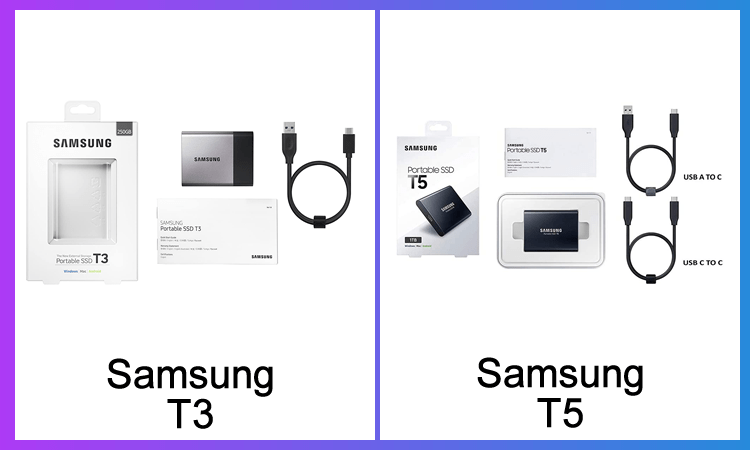 Since T5 acts more like an upgrade to the T3 model, we could expect that they would only make some modifications to their performance, so everything on the outside may impose some striking similarities. For instance, their dimensions and weight are almost identical. Samsung’s T3 measures 2.9 x 2.2 x 0.4 in. and weighs 0.11 lbs. On the other hand, T5’s dimensions are 2.9 x 2.25 x 0.4 mm and feature the exact weight of 0.11 lbs. 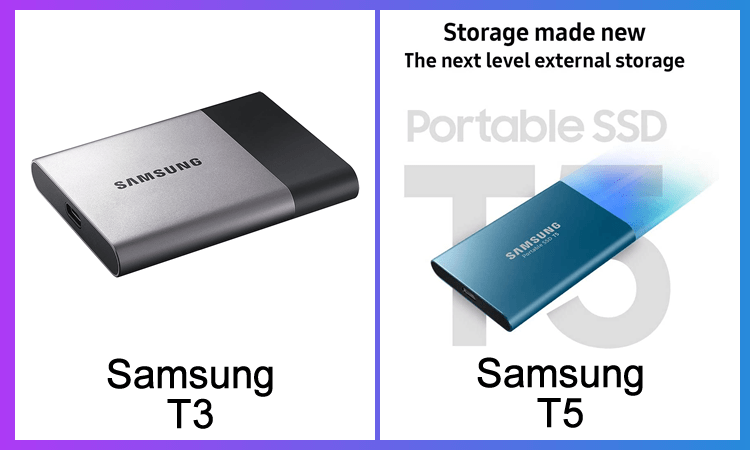 Both Samsung models we are featuring are portable SSDs, meaning they’re best used as an external device, backup memory storage. Samsung claims that both T3 and T5 can easily connect to any device thanks to their compatibility with multiple operating systems. The Samsung T3 boasts a USB 3.1 Type-C connection, and it could also take advantage of the USB Type-C to Type-A cable.

T5, on the other hand, shares an almost similar connection setup, being able to connect with USB A and C ports. It is thanks to the included USB Type-C to C and USB Type-C to A cables on the package.

SSDs read and write speeds usually hover around the average of 200 to 500MB/s compared to HDDs that only average around 50 to 100MB/s. Samsung’s T3 has a transfer speed that has a maximum of 450MB/s, while the T5 features speeds of up to 540 MB/s. There’s a shy difference of 90MB/s, and while it may look minor to some, it is a big deal to several that use transfer files frequently and are always on the go.

Security is a considerable concern for portable SSDs since they’re not safely installed in a fixed spot. The chances of it being lost or getting stolen are high, so having built-in protection for the installed files and software is mandatory.

The two models aren’t that far from each other when it comes to security since Samsung takes this part very seriously. T3 and T5 feature the same AES 256-bit hardware encryption, which would take impossible efforts to crack. They also have the same certifications mentioned on the manufacturer’s website: CE, BSMI, KC, VCCI, C-tick, FCC, IC, UL, TUV, and CB. It is also worth noting that T3 and T5 passed the RoHS2 compliance.

Samsung also made sure that both products were shock-resistant, which makes sense since people would usually use portable SSDs in public spaces where item drop rates are high. Unfortunately, we don’t have any data about the dust and waterproof products, but we can confidently say that they are built with care and tenacity in mind.

For unknown reasons, Samsung didn’t utilize its fingerprint technology in this SSD series. Perhaps it is because of the price point as they want to keep these models accessible to many people. Even without fingerprint functionality, both models are still considered top-notch.

T3 has another layer of security with its password functionality. However, you always have to remember the password you set since it would take a factory reset to re-access the SSD. It only means that all of your saved data will be erased as well.

The T5 model, on the other hand, is a lot more advanced as it comes with Samsung software that allows users to manage their SSD neatly. The software is already embedded on the SSD, so it has plug and plays functionality. However, for Android users, you still need to download the mobile app from the Google Play Store.

SSDs are very in demand these days as it’s starting to become the primary storage solution for many people, especially PC builders. Even external portable ones like these are becoming scarce in the market. The 250 GB variant of the T3 model costs around $130, $230 for the 500 GB, and $430 for 1 TB. We only have two variant prices available for the T5, but it is enough to give you a rough idea of how much you would spend. The 1 TB variant costs $118.49 and $199.99 for the 2 TB through Amazon.

The T3 model is an expensive buy despite being an old release, but it may be because of its availability since it has become very scarce since Samsung has released other models.

Since T3 and T5 are part of an SSD series made by Samsung, it only goes without saying that they will have some similarities with each other. Since T5 is a much more recent release, we will instantly go out of our way and say that it is a better buy regarding specs and price points.

Samsung’s T3 might be an old variant, but it can still become a good competitor to the newest releases from different manufacturers if there’s no scarcity of its stocks. With a transfer speed of 450 MB/s, you can’t go wrong with this model, not to mention that you can also buy up to 2 GB of its capacity.

The T5 model, however, is just much better opposed to T3. Not only that it has faster speeds of 540 MB/s, but it also has built-in software for Windows and macOS users that would allow its users to manage storage without doing extra steps effectively. T5’s 1 TB also costs reasonably, for only $118.49. An upgrade to the 2 TB model won’t cost you $100 more, which gives you a lot of room for thinking of what variant suits your setup the most.

Samsung’s T5 is the winner in this article’s matchup for its specs, security features, and price point.