Are you going on a trek or camp trip and concerned about losing your cellular signal? With this, you can have a Motorola Talkabout two-way hand-held radio. It could be for you plus your team to converse and stay connected while in far-flung areas with no telecommunication coverage.

In this review, we’ll look at the Motorola T100 and T200. Specifically, the advantages and disadvantages of these two models, helping it easy to pick between them.

Nonetheless, the device comes with a guidebook, which will make your life navigation better — assisting you in configuring the Motorola T100. First, insert the battery and switch it on. Next, ensure that the devices are on the same channel. If you’re not sure what channel to use, a user’s guidebook includes a list of frequencies and ranges. After that, you can now use them.

The Motorola T200, like the Motorola T100, requires the installation of batteries. After installing the battery packs, you must configure the devices to converse with one another using the same channel as well as interfering prevention code.

A user’s handbook and channel and frequency listings are also included with the Motorola T200. The Motorola T200 has now become prepared to use after you have completed these steps.

Unfortunately, none of the T100 and T200 products is waterproof, so use caution if it’s pouring or you’re close to the sea. By any means, keep it dry.

The Motorola T100 only has a single power source, three (3) AAA (triple-A) alkaline batteries. Unfortunately, the box does not include batteries, so you will need to buy your own separately. The Motorola T100 lacks a chargeable function, so bring additional batteries if you intend to use this for extended days because Motorola T100 typically lasts roughly 18 hours.

The Motorola T200, on the other hand, has two power choices, giving it an advantage over the Motorola T100 in terms of power supply. It includes a rechargeable function. You may use any rechargeable and alkaline batteries with it. 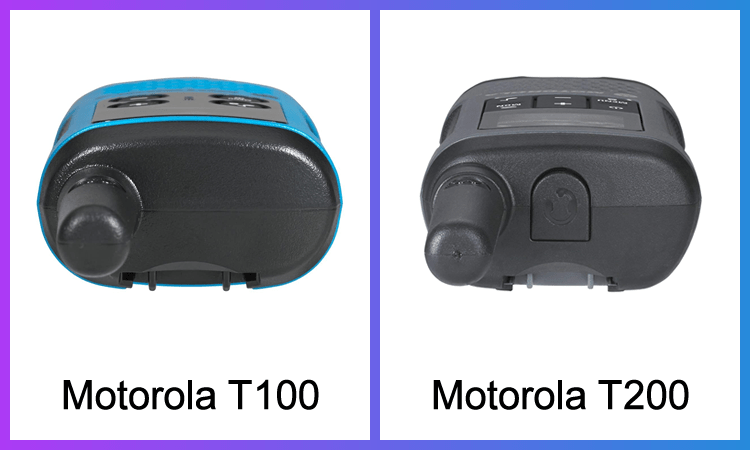 The Motorola T100 has a frequency band of 462 Hertz – 467 Hertz for Family Radio Services (FRS) as well as General Mobile Radio Service (GMRS). This one has approximately 22 channels, yet none of them provide Security codes. Therefore, if you prefer to purchase a Motorola T100 in the United States with no need for a license, anyone can utilize FRS channels from 8 – 14.

However, assuming you want to use additional channels, such as channels 1 – 7, as well as channels 15 – 22, which are covered by the GMRS services in the United States. You must obtain a license per Federal Communications Commission (FCC) before using the device.

The Motorola T100 allows users to search for signals and speak with one another, and it just has four buttons: the activation button, a menu toggle, a push-to-talk keypad, as well as a volume click.

With Motorola T100 owners, you might believe that perhaps the Motorola T100 is easy to operate because it has only very few buttons. However, it’s not. As the number of controls decreases, it becomes more challenging to set, thus reading the manual is essential if you want to set up the Motorola T100.

This features a built-in antenna. It lacks, however, a lighted LCD, making it extremely difficult to operate in low-light conditions. Since the Motorola T100 have only one preset calling ringtone, users cannot alter it.

The auto squelch is also another function of the Motorola T100. If you’re unfamiliar with an auto squelch, it’s a function that suppresses noise level while nobody is speaking on the broadcast. It has a keypad locking to protect you from altering your specific settings by mistake.

To apply modifications to the existing configuration, you must first input your password. The Motorola T100 has a great function that informs you when the cells are going low, but also be cautious not to deplete your devices too much as this will prevent your device from communicating.

In terms of functionality, the Motorola T200 is simpler to use for the first encounter than the Motorola T100. It has a few buttons, but there are plenty for you to operate without consulting the handbook. The Motorola T200 allows you to personalize the call tones, with 20 distinct call tones available to sound when you or a member of the family speaks at each end.

It allows you to know the one you’re speaking with by altering the tone you like with that individual, whether it’s a friend, relative or squad member.

It’s also Eco Smart, which means it doesn’t consume battery life during idle. This even warns you if your battery is running low and features a timer — locks the device while not used.

However, with all these power-saving measures, the battery life didn’t last as extended as the developer claimed. Furthermore, the Motorola T200 is quite sturdy, so you didn’t have to think about your toddlers dropping it. 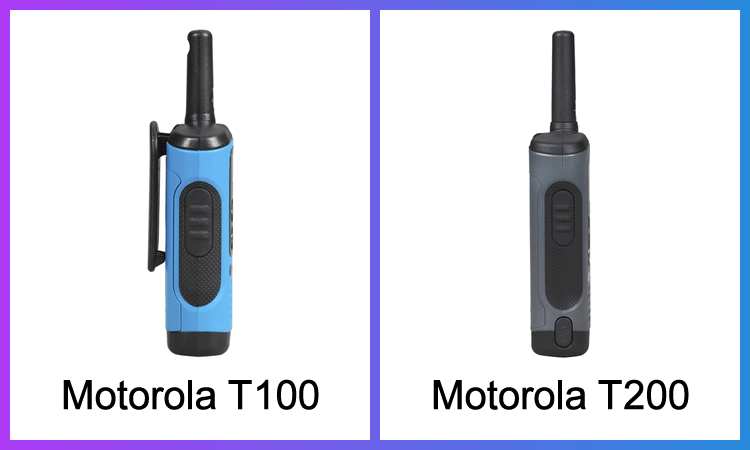 The Motorola T100 and Motorola T200 have few functions and are highly curtailed. Each device requires open regions without or with few impediments to get effective range, however with numerous trees or situations with a bunch of stones, users only have a limited range capability.

Since these goods are also not waterproof, avoid getting them wet. The Motorola T100 and Motorola T200 certainly miss numerous features, though one factor is certain: they can still get the work completed. Well, which one of these two items can you purchase? The Motorola T200 clearly outperformed the Motorola T100. How so? Since it provides more advantages.

Since the T100 lacks a backlit LCD, you can’t even operate it at nighttime or just in gloomy areas. And, the Motorola T200 is much simpler to operate than the Motorola T100, ideal for newcomers.

If you really want a superior Walkie Talkie for the group, the somewhat greater price of the Motorola T200 would not be an issue. With this, it is definite that Motorola T200 is the winner. 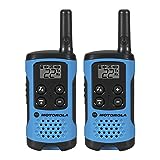