Communication is very important in our day-to-day activities, especially outdoors without reception. While there are many ways to communicate in today’s modern world, like phones and computers, walkie-talkies are the best thing you can use when you’re out in the wilderness or if you want to talk to a specific person.

Walkie-talkies or Two-Way Radios are communication devices that have been around for a long time and are used to communicate with a person who has the same device or tune in to a channel to ask for help. They’re commonly used in security, engineering, and other outdoor jobs that need a secure communication system or operate in a place where there is no signal present. They can also be used as children’s toys or communication devices to keep them safe and entertained.

Retevis is a communications company that specializes in creating various two-way radio systems, from professionally used radios to family-friendly devices. The RT21 and RT22 are two of Retevis’ walkie-talkies available for a low price. Let’s see which of these two devices is better.

Unlike today’s phones, walkie-talkies are known for their easy-to-learn and simple way of communicating, which is very important when you need to set them up for children. Some walkie-talkies have more elaborate setups, but most sold to individuals are easy.

The RT21 and RT22 are compact two-way radios that don’t need too much setting up to be done. You just have to make sure that the batteries are charged, and you’re in the correct channel, then you’re good to go.

These Walkies talkies don’t have a screen and have knobs to change channels, don’t worry since the device will tell you which channel you are on. After you’re in your channel, just press the talk button, then you can communicate with your partner or whoever is on the other side of the line. You also don’t have to install anything other than accessories and batteries since both devices do have their antennas pre-installed.

Since most walkie-talkies are used outdoors, making the device waterproof is a big deal. When there is a sudden downpour on a hike, you won’t have to worry about your radio breaking because of the rain.

Both the RT21 and RT22 are not waterproof and are recommended to be used indoors or in sunny weather. You can cover them if you need to use them on rainy days.

Walkie-talkies are meant to be used outdoors and are usually not charged for long, so you have to make sure that your device is charged and can last for a long time. You also don’t have to worry about the batteries depleting quickly; they only use a small amount of power to work.

The RT21 and the RT22 come with removable and rechargeable batteries, so worrying about buying batteries won’t be a problem. The RT21 has a larger battery at 1100mAh, providing it with longer use times than the RT22, which only has 1000mAh.

Installing the batteries isn’t too difficult for both devices. The RT21’s battery just pops into place, while the RT22 has a back panel similar to older phones. 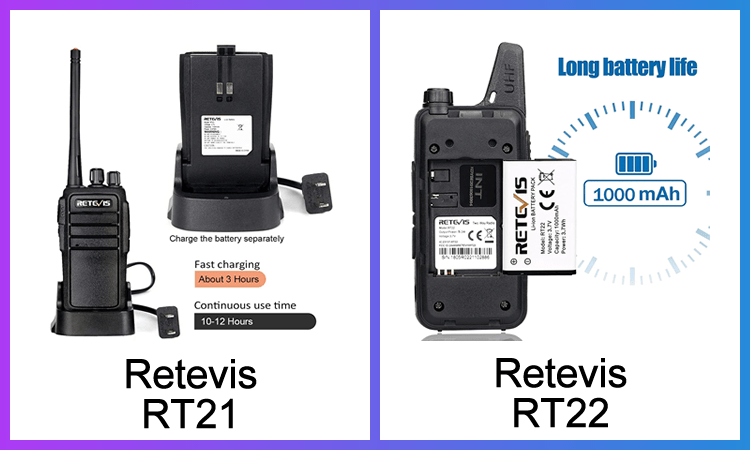 View the RT21 on Amazon

View the RT22 on Amazon

Sometimes during rescues, hiking trips, or emergencies, you can be somewhere far away from the main road or somewhere you can rest; having a long-range radio can be helpful in a few situations. It’s also something you have to look at if you are planning to buy walkie-talkies.

The RT21 has a more extended range of 2.5 miles, which is excellent for hiking and long travels. This is helpful when there is an emergency or if you need to communicate with groupmates or individuals from far away.

The RT22 only has a range of 2 miles, which is lower than the RT21. It can be used indoors, in smaller locations, or just for strolls in the park.

Two-way Radios can connect to different frequencies, from talking with family members to contacting emergency lines, which need licenses. These devices also have various channels which can help you connect with different individuals or a group of people other than your list.

The RT21 and RT22 are both license-free devices that can connect to FRS (Family Radio Service), so you can connect with family and friends without the need for licenses. Both devices can also connect to 16 different channels, which you can change via programming.

Different radios carry different features. Some have screens and buttons, and some have better functions. The RT21 and RT22 are not exempted from this rule.

The RT21 and RT22 have VOX-Functions that can help if you’re working and don’t have your hands free, you can still communicate with your team. They also have Monitors, which allow checking your audio, Battery Saving, and Low Battery Warning that help you keep your battery charged and usable for longer. 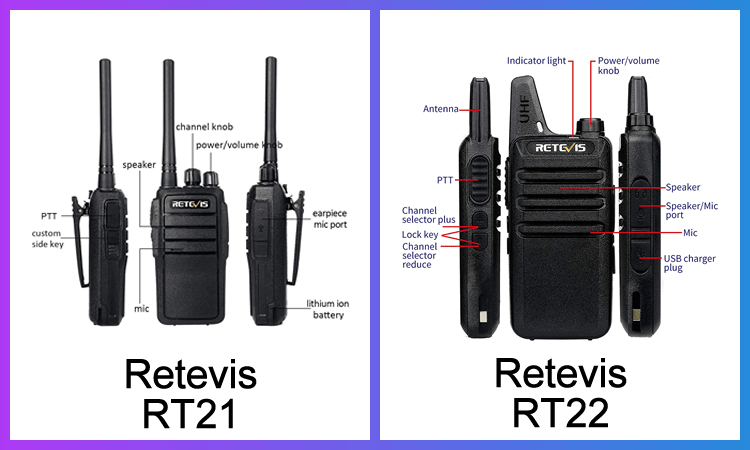 View the RT21 on Amazon

View the RT22 on Amazon

Two-way radio prices vary with their use, features, and sizes, with larger and better devices costing a lot of money. Compact walkie-talkies do sell relatively cheaper than professional-grade devices.

Since the RT21 and RT22 are compact walkie-talkies, they don’t cost much money. The RT22 is cheaper at $62.99 than the RT21 at $75.99. They aren’t the most affordable devices, but they are budget-friendly and are very useful.

The RT21 does come with more accessories and a charging dock for the price and has a better build. The RT22 doesn’t have any accessories out of the box and has a lower quality build because of its price.

The RT21 and RT22 are cheap walkie-talkies that are helpful in many different situations. Whether walking in the park or on long hiking trips that might not have a signal, they can be very helpful.

In this comparison, the Retevis RT21 would win by a landslide. It has a much better build; although it’s not waterproof, it is stronger than the RT22. It also has better features and range than the RT22 which can only be used in small locations, while the RT21 can be used farther, in areas that can also help with emergencies. These devices are small so fitting them in your pocket or on your belt won’t be too much of an issue.

The price of the RT22 is better if you have a budget and just plan to use it indoors and in smaller places. But with only a few dollars more, you can have a better device that is just better. If you are on a tight budget, you can go for the RT22, but you do have to sacrifice the different benefits of the RT21. 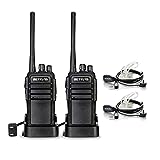 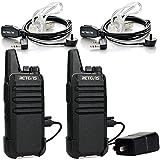