If you’re looking for an external webcam built for streaming or video chatting, audio quality is crucial. The Logitech BRIO and the Logitech C930e, it just so happens, have both in spades. Let’s compare and contrast the differences between Logitech’s BRIO and C930e webcams. The Logitech Brio is a 2017 model, thus it is newer. The Logitech C930e was introduced in 2013.

Both Logitech BRIO and C930e webcams differ in some aspects, with each device offering specific advantages. For example, while the BRIO has a better resolution, the C930e comes with a removable cover for the lens.

The Brio is one of the most modern, clean, and attractive webcams on the market for personal or professional usage, measuring 1 by 4 by 1 inches (HWD) and weighing 2.2 ounces. Its long clip easily and securely mounts to the top of most computers.

A 4.9-foot USB 3.0-to-USB-C cable is included in the box, which is required for the full 4K. You also get a fabric carrying bag in case you wish to take the webcam with you to supplement a remote system’s or laptop’s inferior webcam. It’s worth noting that, while Windows 8 and 10 have native USB 3.0 capability, Windows 7 does not. So, if you’re running Windows 7, be prepared to download USB 3.0 device drivers.

Drivers are instantly downloaded and installed when you attach the Brio webcam into a PC’s USB port using the provided USB 3.0 cable.

Rather than clamping a webcam to your monitor (and perhaps compressing it), the Logitech C930e sits securely on top of your monitor or laptop screen. Its rotatable clip may be folded or rotated to rest on your desk or on a tripod at the same time. With dimensions of 3.70 x 3.70 x 0.95 inches, it is certainly one of the most portable cameras on the market.

Both webcams have the ability to be mounted on a tripod. This isn’t included in every box, though. If the webcam cannot be directly mounted to the screen or notebook, a tripod may be useful. For live streaming, a tripod is also useful.

The image quality is excellent, revealing every blemish, and, as with any camera, it improves when you add more light to your subject. It has a lot more clarity than most external PC cameras. In comparison to other webcam photographs, the colors appear more natural.

A webcam’s field of vision determines how much of the environment it can record. A bigger field of view, on the other hand, isn’t always preferable because it can potentially capture more privacy. The maximum value of the Logitech BRIO and Logitech C930e is the same. Both have a 90-degree viewing range. The Logitech BRIO offers the advantage of being able to alter the viewing area. This, of course, increases the application’s flexibility.

The Logitech C930e captures in crisp 1080p with a wide 90-degree field of view; its wide field of view allows it to capture a lot. Photos and videos are not just clear, but also sharp, with good color reproduction—especially in low-light situations. There’s also a 4x digital zoom.

View the C930e on Amazon 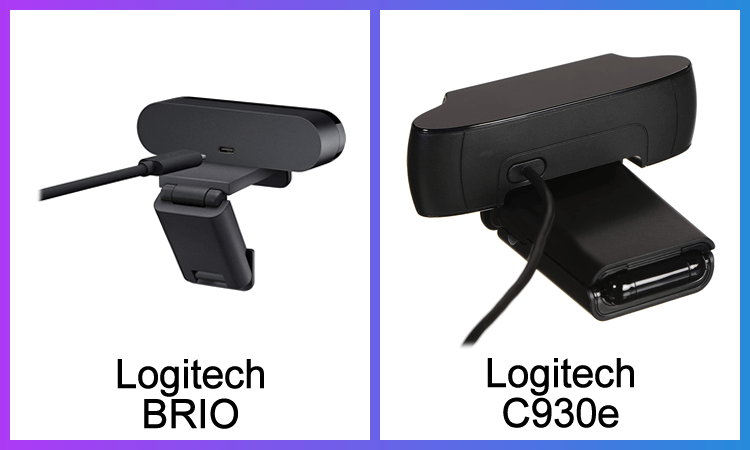 The Brio’s sound quality is likewise exceptional. When considering a camera, this is often disregarded, and a headset is, of course, your best bet for video conferencing. In many circumstances, though, the Brio’s dual, omnidirectional mics with noise-canceling functionality can replace the need for a conferencing headset.

The sound is natural, and background noise isn’t magnified as it might be with poorer webcam microphones.

The audio quality of the Logitech C930e was marginally better than its video quality. While a dedicated microphone would be preferable, its two omnidirectional microphones recorded sound significantly better than the built-in mic on a laptop. Built-in noise cancellation boosted the clarity even further.

Windows Hello is a fun, personalized, and quick way to log in to your Windows 10 computer. All you have to do is reveal your face and you’re in. Hello is a biometric system that also works with fingerprint readers and other devices, but it’s most recognized for its facial recognition.

The Brio is certified for Windows Hello due to its IR sensor, according to Logitech’s literature, and the plug-and-play installation will allow you to set it up for Hello use in the Windows Settings app.

You can use the Logitech C930e webcam right away after plugging it in, but the included Logitech Capture program provides a few extra features, including:

Text Overlays and Effects is a tool that allows you to add text to your movies quickly and effortlessly. Logitech Capture may be used as a Virtual Camera source for streaming sites like YouTube, Facebook Live, and Twitch. The Priority Settings allow you to prioritize the frame rate (to keep the FPS steady) or the exposure (to maintain correct brightness levels). When filming under artificial lighting, Anti-Flicker helps to reduce flicker. Toggle between auto and manual focus using Auto/Manual Focus.

There are much more capabilities than any default camera program, and many of them should be useful to business workers of all kinds. There’s no denying that there’s a lot of possibilities for a webcam.

View the C930e on Amazon

Most people would balk at spending $200 on a webcam, but if you want the absolute best in webcams, the elegant, ultra-high-resolution Logitech Brio is for you. True, you don’t need 4K right now, but the Brio also includes sharp HDR images, excellent microphones, and Windows Hello biometric facial login capability.

True, the Logitech C930e Webcam is a little on the pricey side ($129.99 on Amazon). It’s well worth the money, given its high-quality performance and overall better build quality than the Anivia 1080p HD Webcam. This is particularly true when it comes to video conferencing. If you use it for something other than that, like streaming, the H.264 compression keeps the 1080p HD quality which only takes up half the space on your hard drive.

Because Skype and most other online video conferencing services don’t support that high of a resolution, you don’t really need a 4K webcam right now. The Logitech Brio, on the other hand, is built for the future, when super-fast internet connections make 4K streaming a reality.

With its specs and pricing range, the Logitech C930e has been one of the best—if not the best—webcams on the market. The Logitech Camera C930e may be used as a video conference webcam or as a streaming companion because it has two omnidirectional mics and captures in 1080p. You pay a lot of money for a lot of value.

When it comes down to it, the choice is completely up to the person buying between the two cameras since they are necessarily the same, specs and all. 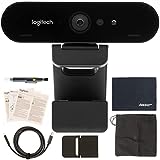 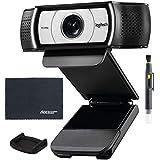