With the rising popularity of video streaming and conferencing, the need for high-definition webcams is a necessity. We no longer need the fuzzy 480p resolution of webcams. We should gear more towards the high-end models, particularly Razer Kiyo Pro and Logitech Brio.

These webcams from Razer and Logitech are top-notch, in our opinion. Find out in our review below if you want to know who’s better between the two.

The Razer Kiyo Pro uses a Standard UVC Protocol to connect to the PC. It’s a plug-and-play mechanism that allows anyone to use the webcam easily. It also has software incorporated with it, called the Synapse, where you can tweak the settings, presets, and so much more.

If you want to be more technical with the camera settings of Razer Kiyo Pro, you can set the options for HDR and field of view. By default, it is set to SDR, and the FOV is set to the widest angle at 103 degrees.

For Logitech Brio, you can find a 4.9 foot USB 3.0 cable in the box to experience a 4k definition. However, note that USB 3.0 only works for Windows 8 and 10. If your system runs on a Window 7, download some drivers for USB 3.0 hardware.

Logitech Brio does not fall from Razer Kiyo Pro’s when installing. It’s also a plug-and-play webcam. This means you connect the end of the cable to the USB-A port of your PC. Meanwhile, you join the other end to the USB-C port of the webcam. You can use the webcam for Skype and Google Meet without installing extra software.

However, if you want to tweak the webcam’s settings, you need to install Logitech’s Capture Software. The application follows a straightforward process that allows you to customize exposure, frame rate, field of view, and so much more.

If you want the webcam’s resolution to 4k, use software such as Logitech Capture App that supports 4k resolution and connect the camera via a USB 3.0 port.

The camera records a well-exposed and sharp picture in full light settings when we test it. The movement has smooth captures, and you can see the background in a 1080p resolution.

It is also impressive if used in lowlight environments. It correctly exposes the face and balances the color, staying away from the pale and washed-out complexion.

However, Kiyo Pro’s autofocus feature proved to be quite an issue. If I move around within the camera’s field of view, it loses focus quickly for a few seconds.

If you want to avoid this, you can set the settings to a manual focus. However, if you’re a streamer that involves a lot of movement, the focus would provide more devastating results.

Logitech Brio provides an even better resolution at 4K Ultra HD video at 30 frames per second. The result is a crisp and richly detailed resolution, perfect for streaming or vlogging.

However, the high resolution of the webcam has its limitations. Few software services only support 4K. This means you can’t use the resolution for the popular video conferencing apps, including Zoom, Skype, or Google Meet. If you want a lower resolution to fit into these apps, you can also set it to 1080p at 60fps.

Meanwhile, the horizontal field of view is up to 90-degree, far lesser than the Razer Kiyo Pro. However, it’s not an issue if you prevent a fish-eye-looking resolution. It also features a 5x digital zoom instead of optical zoom.

When we test Logitech Brio, the quality of the video is crisp, and clear – in short, excellent. Its color provides high accuracy, most especially the HDR support.

The HDR of Logitech Brio can handle harsh lighting or mixed lighting very well. If there’s sunlight hitting my face in a darkened room, the camera didn’t overexpose the overly bright area.

Overall, the contrast in the brightness of the background remained balanced. Also, Brio can handle lowlights, similar to Razer Kiyo Pro. 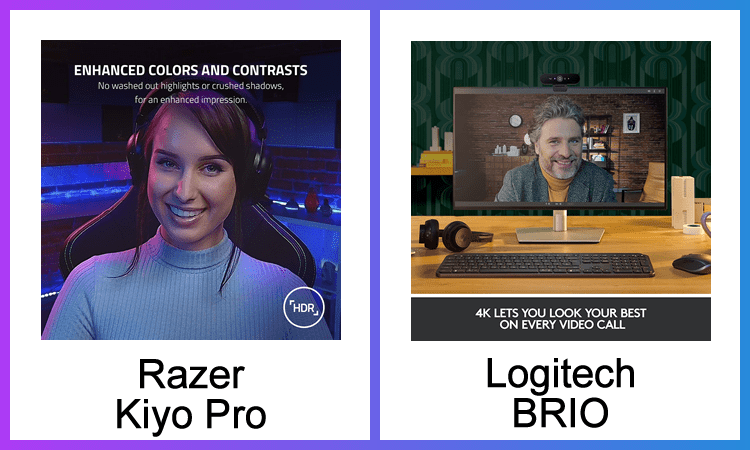 View the Logitech BRIO on Amazon

A muffled webcam microphone is a thing of the past. We used Razer Kiyo Pro in test recordings; it captured our voice clearly. It catches a bit of room echo, which we hope does not. However, it’s not a big deal since the recording sounds good.

It’s an even better microphone compared to laptop microphones. The high quality of the sound allows you to use it during Discord or Twitch streams and Skype calls. Though, it somehow picks up the mouse and keyboard clicks.

The Logitech Brio does not fall short in the sound department too. While our best bet with sound recordings is using a high-quality headset, this webcam proved to be on par.

The noise-canceling feature, an omnidirectional mic of the Brio, eliminates the need to use a conferencing headset. The sound quality is natural, with less amplified background noise.

Razer Kiyo Pro’s mounting options are several, providing you with many options when setting it up. The monitor mount comprises two points of vertical articulation and has a 1/4 inch-20 tripod. If you don’t want to use a tripod, the camera is attached to the mount via the same 1/4 inch-20 port, which proves to be versatile.

Software speaking, the Synapse software that can be installed during the initial setup is a breeze to use. It has various functions that allow for camera setting adjustments such as brightness, contrast, saturation, and white balance.

If you need an advanced setting mode, it also features one where you can tinker with the sharpness, aperture, tilt, and many more.

On the other hand, Logitech Brio offers a different style and features. It has an extended clip attached to it, which we find secured enough when we mount it on our monitor screen. It also has a flip privacy cover to keep unwanted eyes spying on you.

Consequently, the Logitech Brio has a background replacement feature in the Capture App. This means you can choose a background during a video stream or conference calls, such as an apartment, a downtown city, or any background photo of your liking.

You can also utilize the zooming feature with the Capture app that goes together during the installation of Brio. You can change the field of view to your liking from 78 degrees up to 90 degrees.

The app also supports Window Hello, which allows you to unlock your PC with facial recognition. Unfortunately, we find it a bit buggy and require a few restarts. 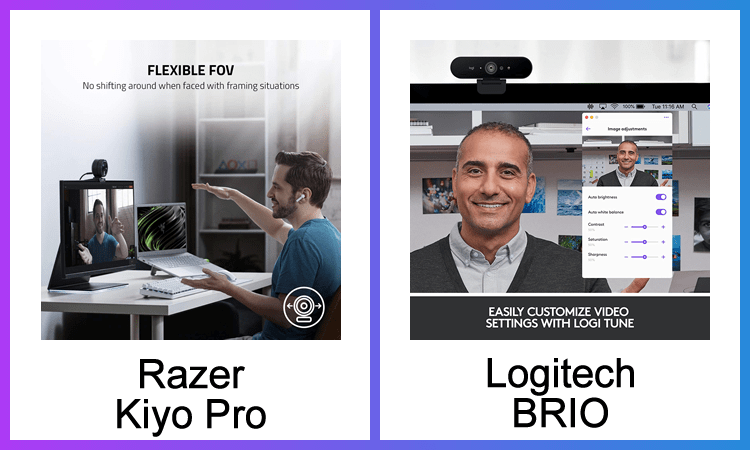 View the Logitech BRIO on Amazon

Razer Kiyo Pro and Logitech Brio offer similar prices for a pretty hefty price tag of $200. Though quite expensive, the features speak more than the price could offer. You can’t doubt the high 1080p resolution and Kiyo Pro and an even higher resolution of Brio of 4K.

Comparing both will gear you more towards Logitech Brio because of its 4K resolution, Window Hello Support, more camera setting customization. However, the Razer Kiyo Pro also does not fall short in performance. It produces clear video and sound resolution and more mounting options.

Now onto our verdict. In our opinion, we find Logitech Brio proves to be more worth buying than Razer Kiyo Pro. Aside from offering an even higher resolution of 4K HD, it produces a higher image, video, and sound quality.

We don’t find significant issues when using Logitech Brio, except the Window Hello support. While Razer Kiyo Pro offers similar results, we recommend a 4K HD resolution rather than 1080p for a similar price.

Some may not need a 4K HD resolution webcam. However, you can set Logitech Brio with a 1080p HD resolution to fit into several video conferencing apps like Skype and Zoom. In our opinion, we find Logitech Brio to be the best choice for whatever purpose you’re using your webcam. 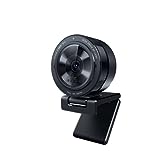