Headsets matter a lot these days, especially for gamers that take competitive games a lot seriously. For instance, the FPS genre is known for its fast-paced gameplay and reliance on audio cues. To stay ahead in the competition, you need to have an excellent peripheral that will help you locate enemies and prepare for your next step.

Aside from being a gaming staple, headsets are also needed for those music sessions or if you just want to unwind and listen to some beats. With all of these requirements, you need to be flexible and can perform when things get rough. Razer is one manufacturer widely known in the gaming industry, and their products are mainly made to suit the taste of many types of gamers.

In this article, we will review two models from them, Razer Nari and Kraken, which are top-tier products that have shipped many units worldwide. From their connectivity features to a degree of comfort, we will do our best to uncover the best buy among these two.

Razer Nari is one exciting model to review because of its reputation. It is an ideal wireless headset to get if you’re not into raw specs or you want to get things going right away. You can enjoy Nari for up to 39 ft. It’s marketed as a wireless gaming headset, but it also has a wired mode through a 3.5mm analog port, which makes it compatible with other devices such as gaming consoles.

On the other hand, the Kraken model is only limited to its wired functionality. It has a non-detachable cable that measures 4.27 ft. Having wires may bring some disadvantages, but at least you don’t have to charge it when it runs out of battery constantly. Kraken connects through a 3.55 analog port, similar to Nari’s wired mode.

With Razer Chroma Lighting, the Razer Nari can run for up to 14 hours, and without it, the lifespan would increase by up to 20 hours. These numbers are impressive since gaming and work sessions wouldn’t typically last longer than 10 hours. If you’re a hardcore gamer per se, you may still be able to use the Nari but at the cost of turning off the RCL.

Mobile gaming has exploded within this decade, but it’s a shocker how many manufacturers are not focusing on this market. Good thing the Nari can also be used on mobile devices while on its wired mode, and the same thing goes for the Kraken since it’s innately a wired gaming headset.

We are comparing both plug and play products, but the Nari model allows customization through the dedicated software that you may find and download on Razer’s official website.

Products made by Razer are top-notch when it comes to their gaming performance, but most of the time, audiophiles would find them mediocre. It is somehow true because the company is investing most of its resources to ensure that its product line is faithful to gamers and will do enough work to aid them with their gameplay.

Razer’s Nari has a frequency response of 20 Hz – 20 kHz and impedance of 32 Ω (1 kHz). The headset’s sound is excellent for a gaming environment but is just suitable for music and streaming. A good feature that the Nari has is its ability to balance in-game sounds and chat. This way, you’ll never have to ask someone to repeat what they said because the background music is louder than their voice.

The wired Kraken has a frequency response of 12 Hz – 28 kHz and a similar impedance of 32 Ω (1 kHz) to the Nari. Kraken is known for its superior performance, allowing players to hear footsteps in FPS games in a crisp manner.

Unfortunately, both of the products we’re reviewing don’t have noise cancellation built-in to them. Razer probably didn’t bother investing more resources into that because they know that no one would use it primarily outdoors.

Nari has virtual surround sound enabled, thanks to the THX Spatial technology. For Windows 10 64-bit users, Razer Kraken provides 7.1 surround sound through software, which is beneficial for those having a hard time locating their enemies on games that rely much on audio and environmental signals. 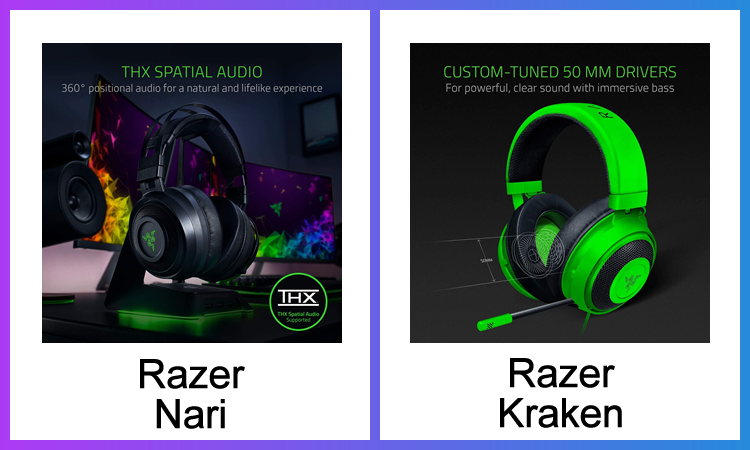 Since they’re both made by Razer, it only makes sense that they would be loaded with the same type. They are called Retractable Unidirectional Microphones with a Unidirectional ECM boom pick-up pattern.

The products feature a flexible microphone that can be easily adjusted to fit a gamer’s comfort and setup. Since it’s expected that they will be used inside, there’s no active noise cancellation available for both products, which is a good thing since it will only increase the overall price of these products. Lastly, they also don’t have wind noise reduction, which doesn’t matter anyway since you will use one of these headsets most inside your room.

Now, we’re here on an essential part of any headset, the level of comfort it can provide. We’ll start with the Nari first. It has swiveling earcups which are more than enough to let you know that it will not make your head hurt even if it sits for hours. The earcups are also made out of heat-transfer fabric and also memory foam.

The Kraken has a good earcup that provides better cooling thanks to the cushions that are filled with cooling gel. Nari and Kraken share the same materials for earpads, which might be a recurring theme in some parts and functionalities as well. Whatever product you picked between the two, you will never have your regrets as both are straight-up serving comfort more than anything else.

Razer headsets are premium in quality, so you can expect them to be priced expensively, even those of the likes of Kraken that don’t have that many features. Razer’s Nari is priced at $149.99 on their official website, while the Kraken model can be bought for a price of $71.99. The price difference is too noticeable, and perhaps it would contribute to some people having doubts about what to purchase.

Razer Nari is the clear winner of this comparison for the looks, performance, and functionality. The approach to this model’s appearance is sick and is the best pick for people looking for minimalistic peripherals.

Razer Nari is also superior with its ability to switch into two modes, wired and wireless, which gives gamers a lot of freedom and availability when it comes to switching gaming devices. The game and chat balance also impressed us since it’s widespread for players to make some mistakes because some of the comms are muted by the ongoing music from the game.

Lastly, the Nari is also powered by Razer Chroma Lighting, significant for RGB enthusiasts. Being able to customize the looks of a headset is underrated.

Kraken might have lost in this Razer faceoff, but that doesn’t mean that you should snob this product. For its price, it’s a solid gaming headset that provides more than the bare minimum of what you should be expecting for a device that you will use for gaming. 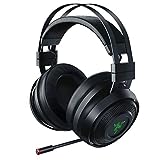 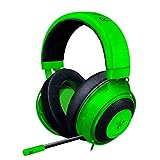